On view through Sunday, June 30th

David Sanchez-Burr
Bio
David began his experimental sound and visual work in Richmond, Virginia while studying at Virginia Commonwealth University. He has exhibited and performed his work widely at museums, art centers, cultural spaces, and many non-traditional venues and locations nationally and internationally. David interweaves pedagogy, curatorial projects, and his own work to examine the social, economic, and cultural implications of technology in the 21st century. He has received grants and awards from The Nevada Arts Council, The Media Arts Project, ISEA, the Art Production Fund and the National Endowment for the Arts among others. David Sanchez Burr has taught at the University of Nevada, Las Vegas, University of Maryland, University College, and New Mexico Highlands University. He is an Assistant Professor of Sculpture and Expanded Media at Lake Forest College in Illinois.

Artist Statement
David Sanchez Burr makes work that introspects collective and individual action. Having deep associations with democracy, the terms collaboration, inclusion and participation permeate our current speech to help imagine our futures. David’s artwork reveals the depth by which art can demonstrate the spectacle of our time while looking at democracy to find answers. Through site specific installations and performance, the artist creates a complex cacophony and set of harmonics that are stirred by the emergence of the audience: an itinerant community encouraged to navigate, modify, and help author the experience of the work.

Kevin Maginnis was born 1955 in Menominee, Michigan. In 1977 he graduated from the University of Wisconsin at Green Bay with a degree in painting and printmaking. After graduation Maginnis moved to Chicago where, along with the continuation of his practice he began a graphic design business. In 1986 Maginnis received his first solo exhibition at the New York Academy of Sciences. In 1987 he produced what would become a series of independent shows starting with a counter-exhibition, The Non-Spiritual In Art: Abstract Painting 1985 – ????, followed in 1989 by Strange Attractors, the Spectacle of Chaos. In 1990 the artist had his first solo show in Chicago at Rezac Gallery.

In 1992 Maginnis began a long hiatus from his practice. Not until 2010, after liquidating his business, did he begin his practice again. A series of shows soon followed. First, a group show at Hyde Park Arts Center, followed by a one person show/installation at The Suburban Gallery. In 2016 Maginnis created his most ambitious independent exhibition yet, titled Spun, featuring 20 different artists “platformed” upside down inside an installation of an upside down gallery space.

Currently Maginnis continues his practice of platforming and stand-alone installations at Mana Contemporary in Chicago. 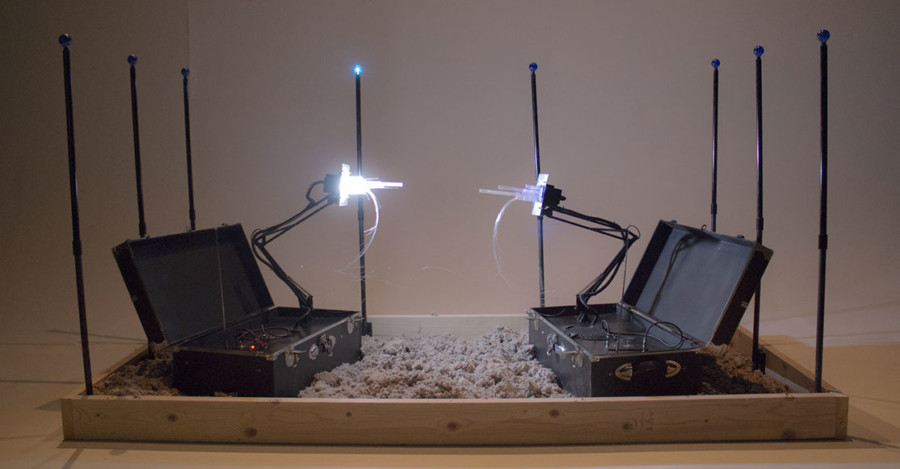