moniquemeloche is excited to present Show Me Yours, an exhibition featuring the work of emerging artists Brittney Leeanne Williams, Jake Troyli, and Bianca Nemelc. Presented in tandem with BASKING NEVER HURT NO ONE – a solo exhibition of Cheryl Pope’s new body of work exploring the leisured nude figure – Show Me Yours expands upon Pope’s novel approach to the nude form as a site for examining systematic social concerns. Like Pope, the artists of Show Me Yours offer up their own contemporary interpretations to the classic motif, galvanizing the nude form as a starting point to contemplate prevalent issues such as identity, trauma, and gender.

Brittney Leeanne Williams explores the potential of the female body to both encapsulate and express a variety of psychological states. Rendering skin tone in a surprising spectrum of reds in an effort to subvert expectations, Williams depicts the figures as both faceless and contorted into a near circular embrace of their own bodies, or that of another. Ensconced in these intricate moments partially inaccessible to the viewer, the bodies expand out of surreal fractured backdrops, sourced from the artist’s own personal history. Acting as an amalgamation of both the artist’s identity, as well as that of her female family members, these bodies serve as communal symbols of hope and love, pain and loss.

Jake Troyli utilizes the absurd as an entry point into larger considerations of identity and masculinity. Depicting humorous scenes grounded in the language of classical painting, Troyli inserts his own body as an elastic avatar, able to move through various surfaces and vignettes. Referencing the common social practice of code switching – the practice of alternating between varieties of language – Troyli examines the intricacies of his own identity as a biracial man whilst inhabiting different spaces.

Bianca Nemelc embraces the fragmented female form, placing it against an earthly backdrop of greens and yellows. Although beginning as self-portraits, her monumental headless female forms seek to stand in for all women of color through their renderings in multiple shades of brown. Influenced by the art in her grandmother’s home – such as Fernando Botero and Tarsila do Amaral – Nemelc depicts her figures with playful looping lines, the contours of their bodies matching the delicate curves of water streams and plant branches surrounding them. Motivated by her own identity as a multiracial woman, Nemelc creates large-scale immersive works to provide a meditative space on culture and heritage. 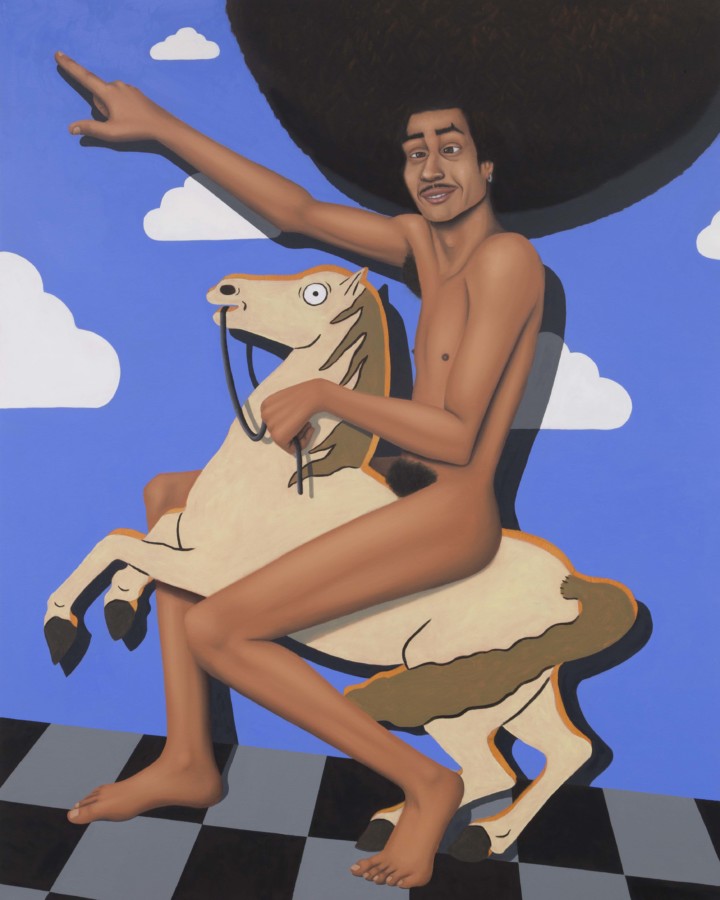