Coffee by Starbucks and pastries by Artemios Bakery!

Images are often used to access something we long for but can’t have, can’t reconcile. Visualization allows us to proceed as though there is presence. Projected presence, like memory, is soft. Allows all sorts of cheating.

Benjamin Zellmer Bellas, Judith Brotman, Meg Duguid, Brent Garbowski, Jeffrey Grauel. Every one of these artists has engaged someone else, made an agreement with them as a foundational part of making the work. Without the agreement the work is utterly different. The contract is explicit. t may even be the thing actually on view. But the art, as it so often does, leaks out beyond the scope of the agreement. Or it shifts or generates a shift. Maybe we are all desperate to shift the agreement we have with loss. We find it difficult to have (something or someone) and then not have. Perhaps we all have some kind of desire to cheat something breaking, to cheat loss, cheat death.

Careful what you wish for….

Benjamin Zellmer Bellas received his B.A. in Studio Arts with minors in Art History and Philosophy from the University of Pittsburgh, and then went on to receive his M.F.A. in Sculpture from the School of the Art Institute of Chicago. He has exhibited in galleries and museums around the world, and his work has been featured in publications such as Sculpture Magazine and The Washington Post.

Judith Brotman is an interdisciplinary artist and educator from Chicago. Brotman received her BFA and MFA from the School of the Art Institute of Chicago in the Department of Fiber and Material Studies. Her work includes mixed media installations and theatrical immersive environments which occupy a space between sculpture and drawing. More recent work incorporates language/text based conceptual projects which are also meditations on the possibility of transformation. Brotman has exhibited extensively in Chicago and throughout the US. Exhibitions include: Threewalls, Chicago Cultural Center, Hyde Park Art Center, Slow, Gallery 400, Illinois State Museum, INOVA, the DeVos Art Museum, Hampshire College, Smart Museum of Art, SOFA Chicago, The Society of Arts & Crafts, Boston, and The Museum of Fine Arts, Boston. Brotman has taught at as a Harper Fellow at The University of Chicago and currently teaches at the School of the Art Institute of Chicago.

Meg Duguid received her BFA from the School of the Art Institute of Chicago and her MFA from Bard College. She has performed and exhibited at the Museum of Contemporary Art Chicago, 6018 NORTH, Slow Gallery, and Defibrillator Performance Art Space in Chicago, as well as the DUMBO Arts Festival in Brooklyn, 667 Shotwell in San Francisco, and the Zona MacoArt Fair in Mexico City. Duguid has screened work at Synthetic Zero in New York, Spiderbug in Chicago, and the Last Supper Festival in Brooklyn. From 2009 to 2011 she ran Clutch Gallery, a 25-square-inch white cube located in the heart of her purse; since then, she lends her purse to others to curate and carry. Duguid lives and works in Chicago with her husband and three cats.

Brent R. Garbowski studied at The School of the Art Institute of Chicago and has been living and practicing in New York since 2013. He works across sculpture, video, and photography. Born in Wisconsin and raised in Michigan his work explores concepts of romanticism and loss, mining American iconography and narratives of Midwestern decline.

Jeffrey Grauel is an American artist, curator, and gallery director. His artwork has been presented in parking lots, former mortuaries, museums, corporate lobbies, malls, galleries, homes, abandoned lots, faculty offices, and the windows of Tiffany’s. As co-director of Slow he runs an in/dependent gallery in the bathroom (Loo), brews curated beers (SmAB), and give tours of artwork under hotel beds at art fairs.

Paul Hopkin was raised by devout Mormons in the Nevada desert. He was expected to become a scientist. He earned a BFA in ceramics from BYU and an MFA from SAIC. He has a quiet but active studio practice that focuses on material connections to narrative structures. He has a tendency to include food and alcoholic beverages as both subject matter and production material. Paul established slow in 2009, a storefront gallery that has established itself in Chicago’s vibrant scene of artist run spaces. He has curated over 50 shows and worked with couple hundred artists. He has curated shows in other venues as well including the largest ever group show in Clutch, a 5” white cube inside Meg Duguid’s purse, Heaven Gallery, Dock 6, and Columbia College’s A&D Gallery. 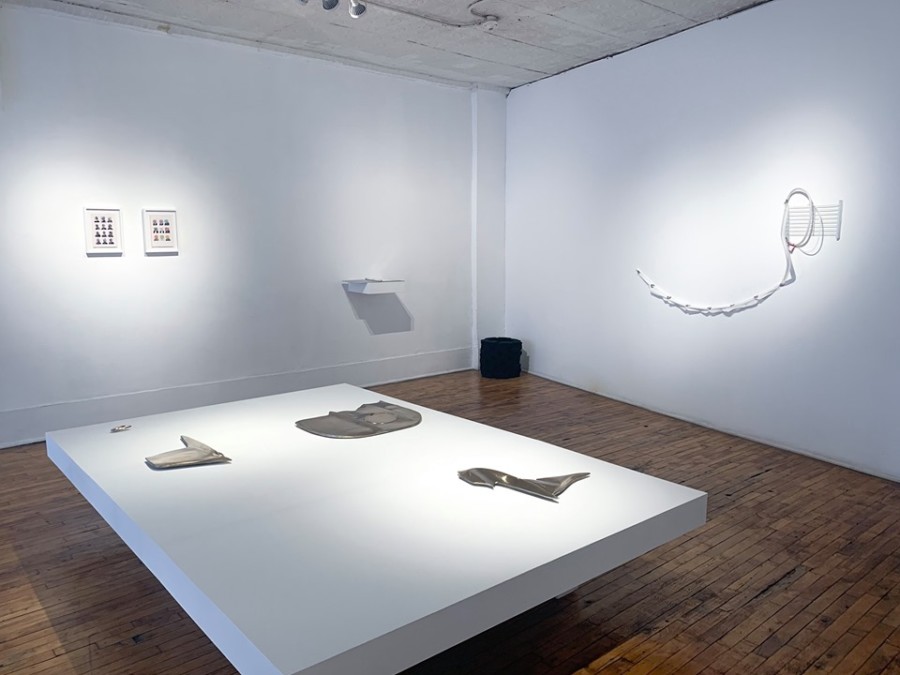