The title itself also may be deceptive. Pateras is no novice, after more than 20 years on the scene. But don’t read the work as any kind of boast. Instead, the rodeo reference is akin to the turbulent self-reinvention he went through when starting this piece, which he reveals last happened when he wrote “Blood Stretched Out” for Lampo in 2014.

Pateras finds inspiration in the words of poet Adrienne Rich: “All new learning looks at first like chaos.”

“Music is so mysterious. When you find something that works, you can be very tempted to keep doing the same thing,” says the Australian composer.

“I tend to get bored and look for a new take or approach. It feels very chaotic, but I remind myself that’s what you always have to go through. This seems to be the ideal state for a musician to do a good job—terrified curiosity.”

Anthony Pateras is a composer and performer whose current work focuses on electroacoustic orchestration, temporal hallucination and sound phenomena. Pateras has created over 75 works, receiving performances from the Los Angeles Philharmonic, Australian Chamber Orchestra and BBC Symphony; commissions from the GRM, Slagwerk Den Haag and Südwestrundfunk Baden-Baden; residencies from ZKM, Akademie Schloss Solitude and La Becque; and fellowships from Creative Victoria, and the Ian Potter and Sydney Myer Foundations. He has released over 40 albums including collaborations with Mike Patton, Stephen O’Malley and Valerio Tricoli. Aside from solo concerts, he currently performs with eRikm, Jérôme Noetinger and Erkki Veltheim.

Pateras made his Chicago debut for Lampo and the Graham Foundation in May 2011.

Since 2010 the Graham Foundation has supported and partnered with Lampo to produce this performance series held at the Madlener House. Lampo, founded in 1997, is a non-profit organization for experimental music and intermedia projects.

Image: Courtesy of the artist.

Tags: Anthony Pateras, Chicago, Graham Foundation for Advanced Studies in the Fine Arts, Lampo, Near North Side, This Ain’t My First Rodeo 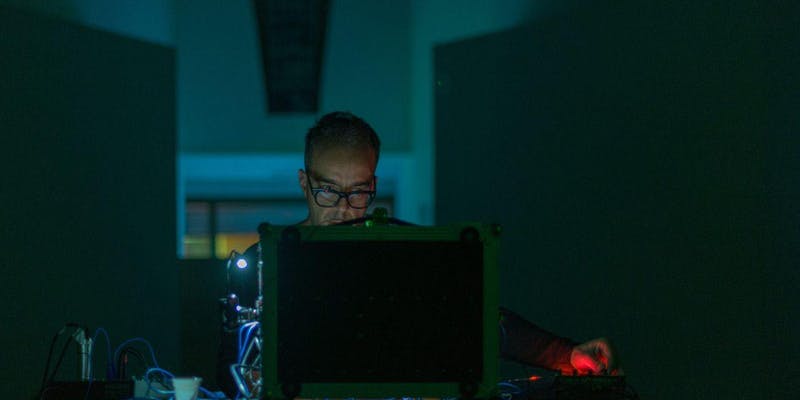