The Fulton Street Collective is proud to present the work of visual artist Sonya Bogdanova for our Pop-UP Series in our main gallery on Sunday May 12.

ARTIST STATEMENT
I make paintings about political and social power, radical and historic individualism in the US, and racism. Most recently, I’ve been critically looking at my own presence as a white woman in Chicago, and how to use my paintings to push political change.

In studying these themes, I’m interested in two visual concepts: physicality and flatness. Over the years, I’ve found people’s bodies are an excellent communication tool. Depicting neon flesh on contorted bodies and faces is an organic way for me to convey messages about radical hatred and love vs. power. Psychologically, it’s easier for ideas to resonate with viewers when shown through a universal lens, and the human body is the perfect conduit.

Flatness is important to me because of its ease and clarity. As a political painter, I prefer completing works efficiently, and I like my work to have as little visual clutter as possible. Flatness often feels like an equalizer in my work, reducing objects down to their basic elements and elevating/downgrading their value.

Racist violence was an early fear I had in childhood. My family and I fled covert Jewish persecution in Moscow in the 90’s. Historically, the country was built on overt minority oppression and ethnic cleansing. Internal passports were notorious for listing nationality/ethnicity. Jews, Tartars, and Romani peoples were considered second-class. My grandpa and mom were both assaulted for being Jews in the 40’s and 70’s. A month after arriving in the States, I experienced my first Black History Month, and I remember watching civil rights footage with abject horror. I saw John Lewis on the bridge and the four girls in the church. The brutality was visceral. The feeling never left my subconscious.

My work has always felt personal for this reason. Long before learning the specifics of US history, physical violence against oppressed people turned me into an activist. In choosing their new American identity, my family flipped to defend the Charlottesville white supremacists.

I’m interested in how radical individualism instills a sense of power in people. In the States, people of color and lesser means are kept stratified by those who claimed power through ethnic cleansing and monetary means. In my painting, I’m confronting my inheritance of these white spoils of war. Recently, I’ve been researching the contradictory history of white women as symbols of innocence, as well as perpetrators of racist violence i.e. white women as the left hand of the devil. Within my work, I’m building a vocabulary of symbols depicting, as well as fighting, white supremacy.

Ultimately, I’m more influenced by writers rather than visual artists. My current work began with re-reading All About Love by bell hooks, with a procession of authors and orators like James Baldwin, Christina Nehring, Fred Hampton, Angela Davis, and Ta-Nehisi Coates following. These people introduced me to love as a radical action, resulting in radical societal transformation. Their writing informs the storytelling process in my paintings and builds my visual dictionary.
sonyabogdanova.com 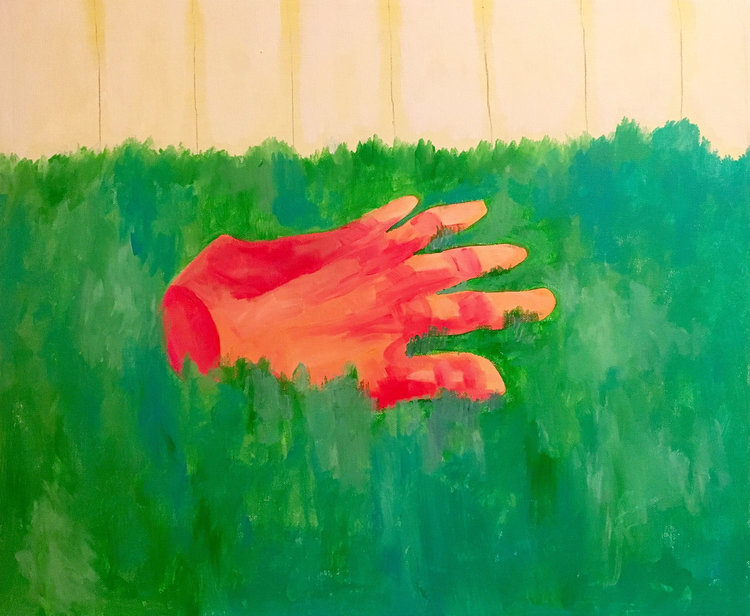