On view through Friday, June 28th

Seth Bogart’s ceramic toothbrushes take many forms. They hold a joke or the absurd but they also offer us a break from reality or at least a constructed reality that follows the script. These toothbrushes are queer. Quantum physics reveals that there is no fixed reality and it’s full of beautiful contradictions. Multiple versions of the same event are happening all at the same time. Quantum is queer. Bogart’s toothbrushes are a subversive way to start and end your day. The new reality check. All the strange and wonderful ways of being non stationary or weird.

The clay is a soft body that takes form though the rubbing and moving of hands over the material. The clay is real. The hands of the maker are real. The clay is manipulated into something not real, but supernatural. Fire burns the malleable and supple earth into reality. High heels on a toothbrush! They are alive and living for their fish nets. These sweet toothbrushes just want to break out and be free and be anything but a toothbrush. The brush becomes a snake, then a toilet, then a leg in heels with fishnet stockings and red nail polish. The intersection of the mundane, the sexual, the absurd and the observed come together in the clay and there are no rules.

I will lick this toothbrush. I will become a toothbrush in the mirror. I will eat myself as a toothbrush as a dog with Aquafresh toothpaste on top.

Seth Bogart is an artist and musician living in Los Angeles, CA. He works primarily in painting, music, film and sculpture. He has exhibited his work and performed at 356 Mission, LACMA, MoCA, Artist Curated Projects, Participant INC, One Archives, MOCAD, Fierman Gallery and more. He is in the band Hunx and His Punx and also performs and releases music under his own name. 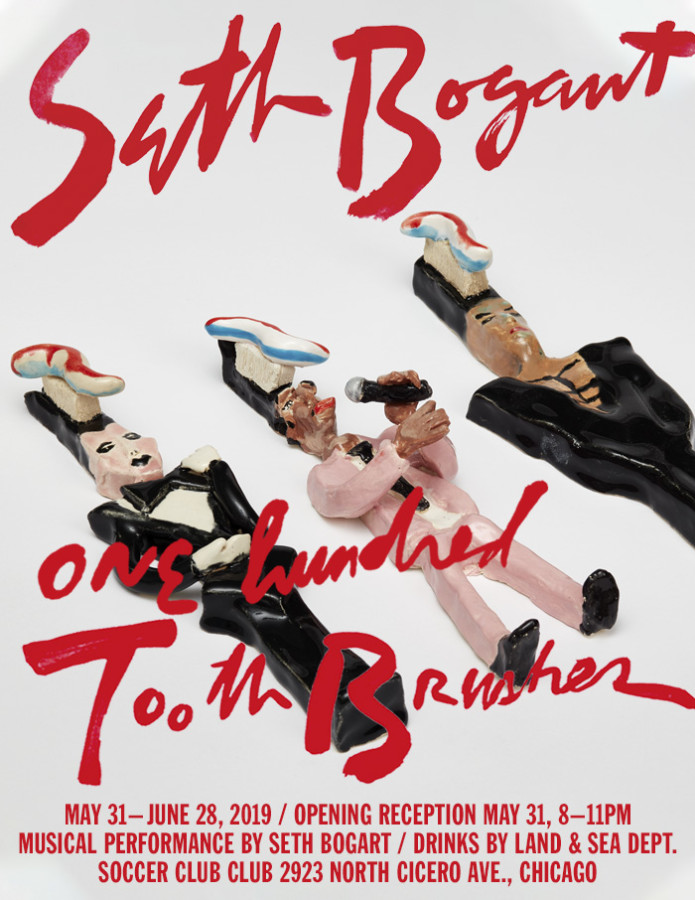