Estado Vegetal (vegetable state) is the latest genre- bending work by writer-director Manuela Infante—her first “vegetable play, not an animal play” that tests the limits of anthropocentrism, which has been her prime artistic interest for ten years.

Created with an all-woman team, the play uses Infante’s sublime sense for comedy and theater in service of philosophical concepts about plant intelligence and vegetative soul. The individual stories of Estado Vegetal branch out from a collision with a tree and proceed to imagine a scenario in which plants decide to reclaim their kingdom.

Experimental performer Marcela Salinas (shown here) plays all of the characters by recording and building on her voice with live looping. Infante, who is also a musician, designed and operates the sound. Rocio Hernandez’s dynamic, expressive stage design renders the plants onstage effectively as coactors rather than mere props, establishing an undeniable network of similarities between humans and plants.

In one sense, Estado Vegetal probes the human need to communicate; alternately, by staging the possibility of communication between plants, it also anticipates a post-anthropocentric theater. The work raises Infante’s concerns with time and image, how perception is shaped, and the cognitive effects of something vanishing. Attuned to both the durational being and hidden language of plants, Estado Vegetal interrogates the value of a life that takes more time to process information or translate it into motion. It is hard to look at difference in people, or anything that photosynthesizes, in the same light after this.

Estado Vegetal draws inspiration from the revolutionary thinking of plant neurobiologist Stefano Mancuso and plant philosopher Michael Marder, who has said that “to recognize a valid ‘other’ in plants is also beginning to recognize that vegetal other within us.” Infante responds: “In accepting plants have other ways of being is to insist on the independence of things. Our notions are transformed, and we need to learn to not subjugate ethics to similarity. We must find ways to develop an ethical thinking towards that which is radically different from us, in any way.”

During a 2015 residency at The Watermill Center, a laboratory for investigation founded by Robert Wilson, Infante began to process ideas of the Nonhuman Turn and Object-Oriented Philosophy, which studies the moment of independence from subjectivity possessed by things and nonhuman forces.

With Realismo, which premiered 2016, Infante challenged the idea of humanity as the only measure for everything. The play proposes objects as vibrant things with a certain effectivity and voice of their own—things that acquire an irreducible degree of independence from the words, images, and feelings they provoke in the humans. It was her first take on a new form of “realism” that engages ideas infused by the Speculative Realists. Other important influences are the video art of Peter Fischli and David Weiss (Der Lauf der Dinge), the ideas of Graham Harman, Bruno Latour, Jane Bennett, and Manuel DeLanda, and the genre of slapstick.

Presenting Estado Vegetal at the MCA, a place for contemporary art and culture, also creates ties between the work and American pop culture and history in unexpected ways. The North American tour is exactly 40 years after Stevie Wonder’s Journey Through the Secret Life of Plants. This platinum-selling soundtrack accompanied the film The Secret Life of Plants, which was based on a 1973 book of the same title by Peter Tompkins and Christopher Bird. To translate the book’s complex information, Wonder adapted the breakthroughs of African American agriculturalist George Washington Carver and experimented with the scientific findings of Jagadish Chandra Bose, who developed instruments to measure plants’ responses to stimuli. Wonder is also an early adherent of digital sampling synthesizers and famously used this technology for The Secret Life of Plants. Infante and Salinas experiment similarly for the music and sound design of Estado Vegetal.

Since starting her first group, Teatro de Chile, Infante has often declared that she uses theater in service of philosophical inquiry; in order to build fictions, she dissects the construction of reality itself. While Chile has a long, ongoing history of directly political theater, Infante’s is better described as ontological. Moreover, as her career has gone on, her work reveals growing investment in what she calls the “contemplative dimension” of theater. She celebrates art’s resistance to utility or consumption; rather than clarifying what is unclear, she says, it should make mysterious what is mundane.

Infante’s early breakthrough plays were bold reinterpretations of historical figures and narratives. With Estado Vegetal she is challenging anthropocentrism and making a claim for the nonhuman and otherness, questioning modern man’s superiority and autonomy.

Manuela Infante is a preeminent playwright, director, screenwriter, and musician. She earned an MA in Cultural Analysis from the University of Amsterdam.

She regards her plays as essays in a corpus of broader currents of thought that stems from theoretical writings, science, and cultural studies. She characterizes her work as “a kind of ‘irresponsible philosophy’; irresponsible in the sense that we strive from stealing from theory to make work, and not having to inscribe myself responsibly/responsively back into the academic corpus. My work is about letting ideas acquire a material life of their own, watching them find their way into the material world, into our bodies and our relations, and thus into time.”

Infante is widely celebrated for feminist re-envisioning of famous historical figures, combining slapstick humor, prose, and memorable mise-en-scènes for works such as Cristo (2008), based on the life of Jesus of Nazareth. What’s He Building in There? was developed through a 2011 residency at The Watermill Center, where she worked with visual art curator Camila Marambio and Juan Esteban Varela, an internationally recognized magician who is blind. On the Beach (2012) was curated by Robert Wilson and premiered at the Baryshnikov Arts Center in New York, and Don’t Feed the Humans (2014) was premiered at the Hebbel am Ufer in Berlin. In 2016 she debuted at Kyoto Experiment with Zoo, a lecture performance examining the themes of humans in exhibition and linguistic differences through Darwin’s On the Origin of the Species. She has toured her theater extensively in Latin America and to Holland, Ireland, Spain, Italy, Germany, Japan, the United States, and Mexico. Estado Vegetal has toured to Spain, Singapore, Switzerland, and Korea. 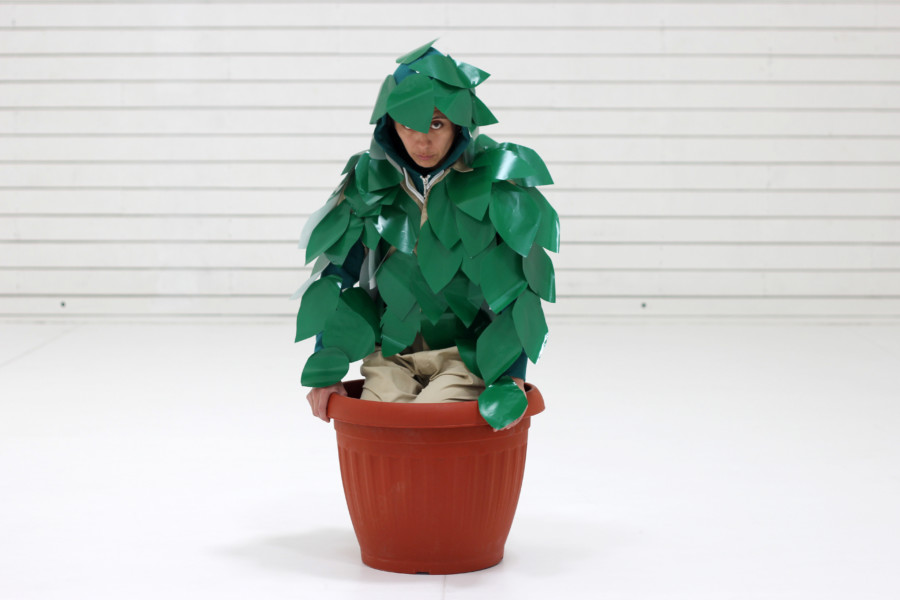