On view through Thursday, August 8th

Works on view include Ilse Bing’s 1952 Plein Air Painter, showing a female artist painting in a lush landscape; August Sander’s 1929 portrait of artist Heinrich Hoerle, taken while he was painting a portrait of boxer Hein Domgorgen; Jason Lazarus’s 2010 portrait of astrophysicist Eric Becklin, the “first human to see the center of our galaxy;” and Ken Heyman’s 1969 portrait of a Newark, New Jersey, beauty parlor owner. Lou Stoumen’s 1981 landscape focuses on a small lemon tree in a Los Angeles neighborhood while the lone figure in Dmitri Baltermants’ Skylight repair, Cuba seems out of place in a futuristic geometric environment.

Selections from Danny Lyon’s Bike Riders series, for which the photographer immersed himself in the Chicago Outlaws Motorcycle Club, include his 1966 gelatin silver prints Cal, Elkhorn, Wisconsin and Cowboy at Rogues’ Picnic, South Chicago. Two 2016 works from Rana Young’s The Rug’s Topography series, self-described as “blended self-portraits,” were made as the artist and her partner navigated both the dissolution of the romantic portion of their relationship and one partner’s decision to transition from male to female. Cecil McDonald, Jr.’s 2013 Ms. Greta, To Be Cool is from the artist’s ongoing In the Company of Black series, for which he photographed people he describes as “extraordinarily ordinary.” Carrie Schneider’s 2011 Burning House (October, afternoon) is from the artist’s Burning House series (of 15 photographs and a film), for which the artist repeatedly built and burned a small house on a rural Wisconsin island, while photographing and filming it within the ever-changing landscape. Videos made from 2001 to 2007 by retiring School of Art video professor Scott Rankin will screen continuously throughout the exhibition.

A reading area in the window gallery will feature books about the artists and the history of photography and video.

Thursdays, June 6, June 20, and July 18, from 9:00-9:30 am
Stroller tour
Bring your youngest art lovers to visit the exhibitions before we open to the public

Free curator-led tours and workshops are available by appointment throughout the exhibition. Contact gallery@ilstu.edu or 309.438.5487. 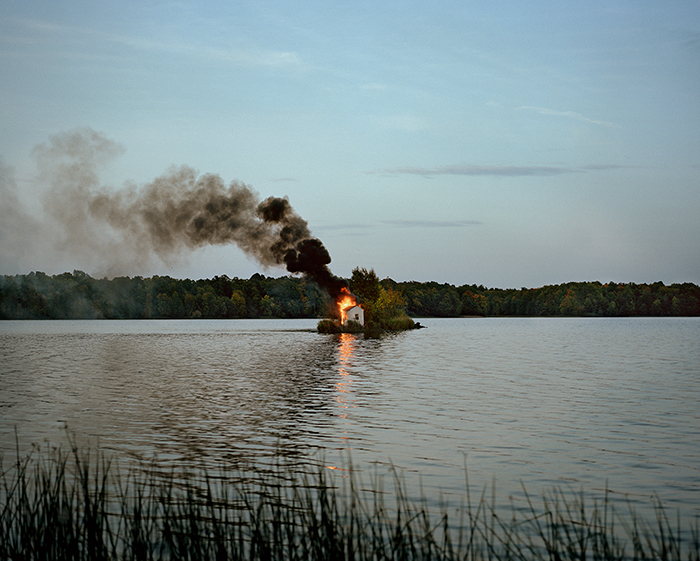