World Premiere Performance: This Is Not A Drill responding to How Dear To Me the Hour When Daylight Dies (1996)

Work-in-progress will be presented as part of the IN>TIME Festival on a date TBD at Gallery 400, 400 S. Peoria St.

The Department of Cultural Affairs and Special Events is pleased to announce the details for goat island archive–we have discovered the performance by making it at the Chicago Cultural Center (78 E. Washington St.). In conjunction with the city’s Year of Chicago Theatre, nine national and international performance groups and artists have been commissioned to develop and present new work, each inspired by one of Goat Island’s original performances. The exhibition archive will occupy adjacent galleries and open in two parts, with the performance space and activations open February 2–June 23 in the Sidney R. Yates Gallery, 4th Floor North, and the exhibition open March 30–June 23, in the Exhibition Hall, 4th Floor North.

Throughout the 23 years of its existence (1986–2009), the Chicago-based Goat Island contributed to the conception of nine major performance works, accompanied by publications, film and video projects, workshops, summer schools, lectures and symposia, inventing a complex institution bigger than the individual works. Freed from prescribed narrative and dialog, the work of Goat Island is built slowly in a creative process informed by repetition, chance and individual perception. The company was known for its sustained collaborative production approaches with work created over the years by Karen Christopher, Joan Dickinson, Matthew Goulish, Lin Hixson, Greg McCain, Tim McCain, Mark Jeffery, Bryan Saner and Litó Walkey. Their democratic, shared activations continue to influence generations of artists, theatre makers, cultural theorists, social philosophers and teachers.

In conjunction with the city’s Year of Chicago Theatre, nine national and international performance groups and artists have been commissioned to develop and present new work, each inspired by one of Goat Island’s original performances. A tenth performance created from fragments of the nine new responses will be presented in June during a week of concluding events. These will take place at the Chicago Cultural Center’s Sidney R. Yates Gallery, which will be transformed into a to-scale re-imagining of Goat Island’s rehearsal space – a church gymnasium – available for viewing and creative engagement on February 2. Additionally, the works-in-progress will be presented at partner cultural venues throughout Chicago as part of the IN>TIME Festival and final world premieres at the Chicago Cultural Center’s Sidney R. Yates Gallery.

The accompanying exhibition in the Chicago Cultural Center’s adjacent Exhibit Hall opens on March 30 and will display the physical archive of materials, from drawings and choreographic scores to traveling cases and costumes. The exhibition has been devised to replicate the generative and pedagogic processes of Goat Island while reflecting upon the extent of the company’s influences. This project is co-curated with Nicholas Lowe, associate professor and curator of the Goat Island Archive at the School of the Art Institute of Chicago. 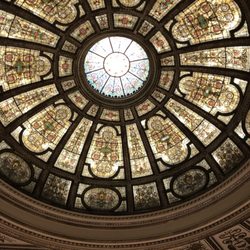