For this ticketed event, Celeste will be joined in conversation by special guest, Eve L. Ewing; the discussion will be followed by an audience Q&A and a book signing. This event will be held at the Swedish American Museum, 5211 N. Clark St. Each ticket includes a paperback copy of “Little Fires Everywhere.”

In Shaker Heights, a placid, progressive suburb of Cleveland, everything is planned from the layout of the winding roads, to the colors of the houses, to the successful lives its residents will go on to lead. And no one embodies this spirit more than Elena Richardson, whose guiding principle is playing by the rules.

Enter Mia Warren an enigmatic artist and single mother who arrives in this idyllic bubble with her teenage daughter Pearl, and rents a house from the Richardsons. Soon Mia and Pearl become more than tenants: all four Richardson children are drawn to the mother-daughter pair. But Mia carries with her a mysterious past and a disregard for the status quo that threatens to upend this carefully ordered community.

“Little Fires Everywhere” explores the weight of secrets, the nature of art and identity, and the ferocious pull of motherhood and the danger of believing that following the rules can avert disaster.

Celeste Ng grew up in Pittsburgh, Pennsylvania, and Shaker Heights, Ohio. She graduated from Harvard University and earned an MFA from the University of Michigan. Her debut novel, “Everything I Never Told You”, was a New York Times bestseller and winner of the Massachusetts Book Award, the Asian/Pacific American Award for Literature, and the ALA’s Alex Award. “Little Fires Everywhere”, Ng’s second novel, was a New York Times bestseller, winner of the Ohioana Book Award, and named a best book of the year by over twenty-five publications. Her books have been translated into more than thirty languages and she was the recipient of a fellowship from the National Endowment for the Arts. She lives in Cambridge, Massachusetts.

Eve L. Ewing is a sociologist of education and a writer from Chicago. She is the author of Ghosts in the Schoolyard: Racism and School Closings on Chicago’s South Side. She is also author of Electric Arches, which received awards from the American Library Association and the Poetry Society of America and was named one of the year’s best books by NPR and the Chicago Tribune. She is the co-author (with Nate Marshall) of the play No Blue Memories: The Life of Gwendolyn Brooks. She also writes the Ironheart series for Marvel Comics. Ewing is an assistant professor at the University of Chicago School of Social Service Administration. Her work has been published in The New Yorker, The Atlantic, The New York Times, and many other venues.

Tickets are non-refundable. If you purchase a ticket and are unable to attend, you’ll have 30 days after the event to pick up your copy of “Little Fires Everywhere”. Proof of ticket purchase required.

If you can’t afford a ticket due to financial hardship, we have a handful scholarship tickets available. Please email us at wcfbookevents@gmail.com for information. Please note: these tickets will be distributed on a first come first serve basis while supplies last. 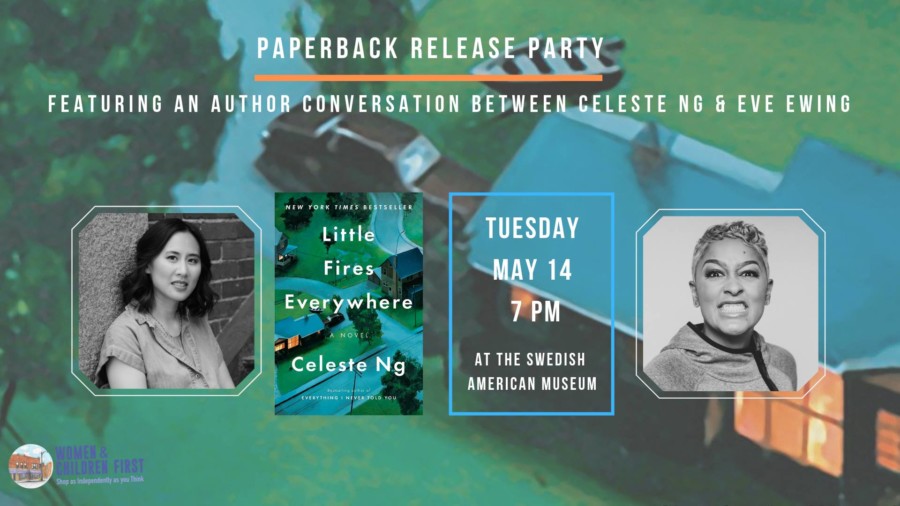