Toypurina and the Kizh Nation

@ Mitchell Museum of the American Indian

Join us for a discussion with Dr. Gary Stickel, archaeology consultant to the Indiana Jones “Raiders of the Lost Ark” film and Kizh Nation Tribal Archaeologist. The Kizh/Gabrieleño are the state-recognized Indian Tribe of greater Los Angeles, Orange County, and the offshore islands including San Nicolas. San Nicolas island is well known from Scott O’Dell’s award winning children’s novel Island of the Blue Dolphins, based on a true story of a girl who spent eighteen years alone on the island. Several objects from the island are currently on display in the museum’s permanent exhibit.

As the tribal archaeologist for the Kizh Tribe, Dr. Gary Stickel co-authored Toypurina: The Joan of Arc of California with Tribal Secretary Dr. Christina Swindall. Toypurina, whose story is remarkably like Joan of Arc, is the only Native American woman to have led a revolt against foreign invading powers in American History. Pick up a copy of Island of the Blue Dolphins or Toypurina and join Dr. Stickel on April 27th for a discussion of the Kizh Nation, state recognition, and the heroines in Toypurina and Island of the Blue Dolphins. 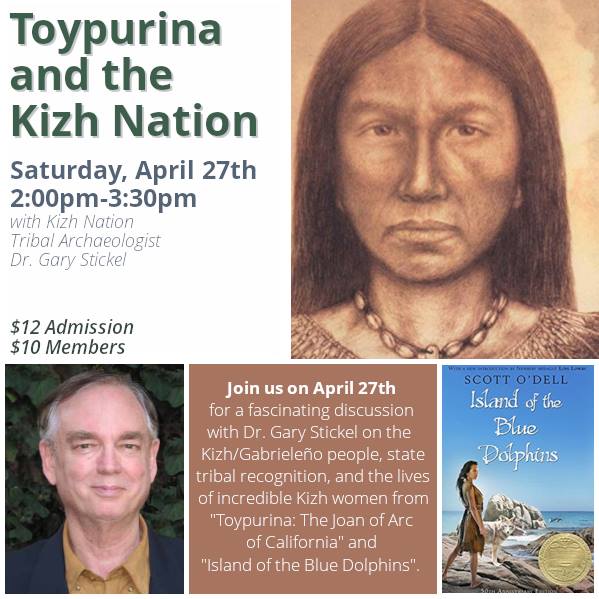