On view through Friday, April 26th

Join us as we celebrate the closing of Still Here: Torture, Resiliency and the Art of Memorializing (Mar 15-Apr 26) with a reception on Friday, April 26, starting at 6pm at the Arts Incubator. The closing reception will also include a performance piece titled “Tutu: Honoring Truth and Healing through the Saints,” which will take place at the Green Line Performing Arts Center (just 1/2 block east of the Arts Incubator Gallery). Event guests will walk down from the Gallery to the Green Line for the performance at 7pm.

About Tutu:
In response to the exhibition, “Still Here,” visitors are invited to gather for a four-part performance that considers how we might honor truth and resilience, and support the healing journey of survivors who experienced torture by the Chicago Police Department. Tutu is a Yoruba term that means ‘to cool’ or ‘to freshen’. Often used in ritual contexts, it reminds us that to restore balance we must first offer ‘cool water’ to all areas of our life. Join us for this culminating performance for as we imagine restoration through the saints from the Black Atlantic world.
Commissioned by Old Town School’s Music Moves Program

About Still Here: Torture, Resiliency and the Art of Memorializing:
“Still Here” is an exhibition showcasing six design proposals submitted by commissioned artists which will become the Chicago Torture Justice Memorial. The public memorial brings awareness to the torture of more than 120 Black men and women from 1972 to 1991 by the Chicago Police Department under the direction of former Police Commander Jon Burge. The memorial is intended to honor the decades-long struggle for justice, as well as the survivors, families, and communities targeted by Burge and his midnight crew. The public memorial is one component of the historic Reparations Ordinance passed on May 6, 2015. Chicago is the first municipality in the United States to provide reparations for racially-motivated law enforcement violence. The six artists are Monica Chadha/Nelly Agassi, Juan Chavez, Sonja Henderson, Andres Hernandez, Preston Jackson, and Patricia Nguyen/John Lee. 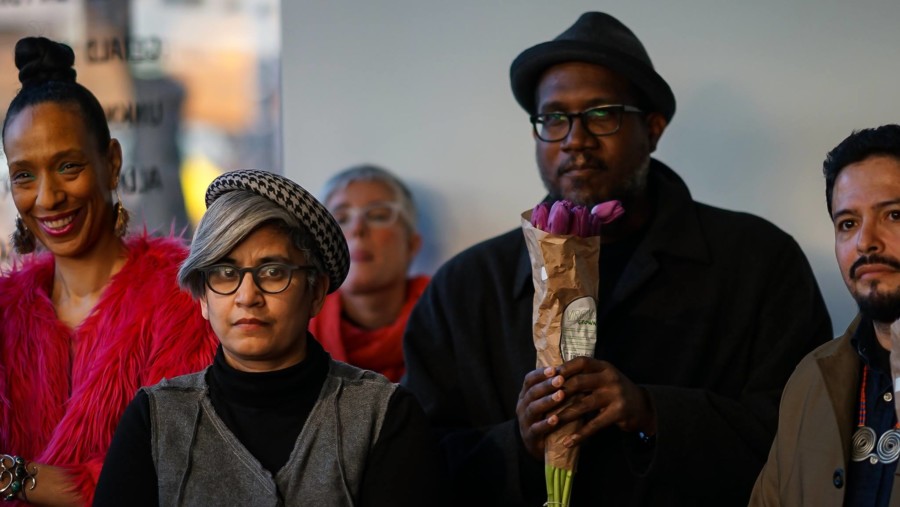