On view through Saturday, May 18th

“Deathless-ness; 10,000 Works” feels like obsession given form. It speaks to the artist’s lifelong interest in collecting things; bits of manufacturing debris from the leveled vacant fields adjacent to his Ypsilanti, MI loft, a head sized chunk of slag poached from an Iron Works State Park in Joliet, etc. Darin’s artwork divides, somewhat neatly, into the not-directly applied mediums (stuff put on one thing and then bluntly transferred to another – OR – applied directly and immediately distorted). The ‘smeary’ and the clean, graphic and cartoony, all have a place in this show.

Darin currently lives in Chicago with his wife, Lina, whom he considers the co-creator of everything you see. She introduced him to Krink ink and ‘Budsies’, which transformed his work and approach to making art. The former is a ‘fast’ ink developed and manufactured by legendary Graffiti Artist Craig Costello. Darin does not use it in the typical Graffiti fashion. ‘Budsies’ is a company devoted to producing Plush Toys based on children’s drawings. Darin has commissioned 14 big heads and there are more to come. “I was supposed to be a writer (and I am, kinda, titles of my written work invade this show, including the exhibition title). These images emerged because of their own necessity. I don’t have a thesis. Every realized image is the result of a fight. You can decide who won. Faster, Faster, More, More.” – Latimer

“Deathless-ness; 10,000 Works (Eyes and Teeth Dept.)” will be on exhibition at Elephant Room Gallery April 6th through May 18th. Free and open to the public, the opening reception is on Saturday, April 6th from 6pm to 9pm and the artist talk is on Sunday, April 7th at 11am. The gallery is located at 704 S Wabash Ave. in the South Loop Neighborhood of Chicago with hours by appointment only. Visitors should contact the gallery via their website to schedule a viewing: www.elephantroomgallery.com.

About Artist Darin Latimer:
Darin Latimer was born in Detroit, MI and has long been obsessed with the city. He started drawing as a very small child, long before he talked, according to his mother, and he never stopped. Drawing was often the antidote to boredom or obligations. He would draw constantly through 10 hour cashier shifts at his dad’s store on the long Vistavision shaped ‘Cigarette Cards’ created by breaking down cartons while stocking. His Mother would drop him off for extracurricular drawing and pastel classes but they always drew some other artist’s picture of something. Darin used to skip school, returning to the city to spend whole days spelunking, book-hunting, salvage-picking, concert and club-going, but mostly just driving around with a camera. When his wife, Lina, attended the University of Detroit, his obsession became a part time profession as he would spend whole days taking photographs all over the city. Writing informs his art in an obvious, but impractical way. Darin does not distinguish between the two of them much. “I get a…let’s call it ‘notion’ (because I loathe the words ‘idea’ and ‘inspiration’), something has bobbed up in the always-on pot of Polenta of my active conflating thoughts, it steps out, preens a bit and petitions for some further actualization; to be ‘made’. I putter in skeptically and it could be with either or both of my alleged vocations.” – Latimer 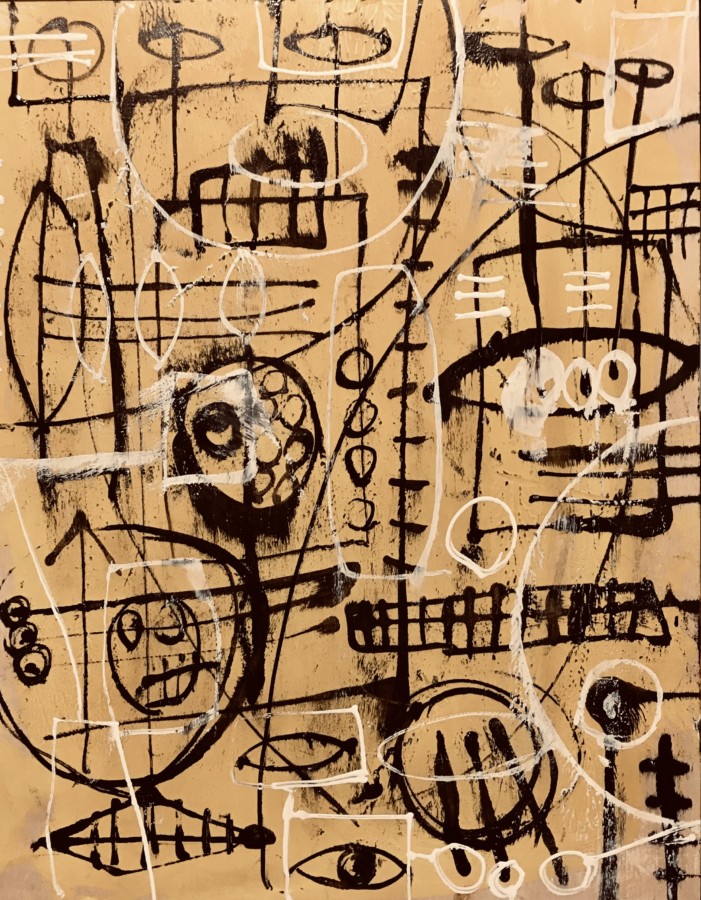