In response to Birmingham, Alabama, 1963: Dawoud Bey/Black Star, this exhibition showcases photographs and films by Carlos Javier Ortiz and David Schalliol pulled from the museum’s permanent collection and the Midwest Photographers Project (MPP). Both artists separately investigate forms of systemic racism in Chicago and beyond through the lens of individual stories.

Carlos Javier Ortiz (American, b. 1977) considers contemporary black life in comparison to the ideals of the Great Migration, which took place from 1916 to 1970 when six million African Americans left the South to find new opportunities in the North. Illustrating socioeconomic patterns that pave the way for a cycle of poverty and violence, his two projects, A Thousand Midnights (2016) and We All We Got (2014), document youth and families in Chicago from multiple perspectives over the course of many years. Ortiz focuses on those affected by gun violence, casting light on the larger forces fostering recurring tragedies in our city.

Long interested in the abandonment and dereliction of residential structures, sociologist and photographer David Schalliol (American, b. 1976) questions the ever-changing urban landscape as it relates to larger race and class inequities. His feature-length film, The Area (2018), follows a community activist, Deborah Payne, as she fights a multi-billion-dollar intermodal freight company in its quest to buy and demolish over 400 homes owned by African American families in her Chicago neighborhood of Englewood. The film is paired with Schalliol’s images of lone buildings centered between vacant lots, appearing as shrines to disappearing neighborhoods. “Instead of seeing one peculiar building, we see the legacy and immediacy of urban transformation,” says Schalliol.  “Instead of asking ‘What happened to thishouse?’ we ask, ‘What is causing this phenomenon?’”

The MoCP is supported by Columbia College Chicago, the MoCP Advisory Board, the Museum Council, individuals, and private and corporate foundations. The 2018-2019 exhibition season is generously sponsored by The Andy Warhol Foundation for the Visual Arts, the Illinois Arts Council Agency, the City of Chicago’s Department of Cultural Affairs and Special Events (DCASE), and the Efroymson Family Fund. 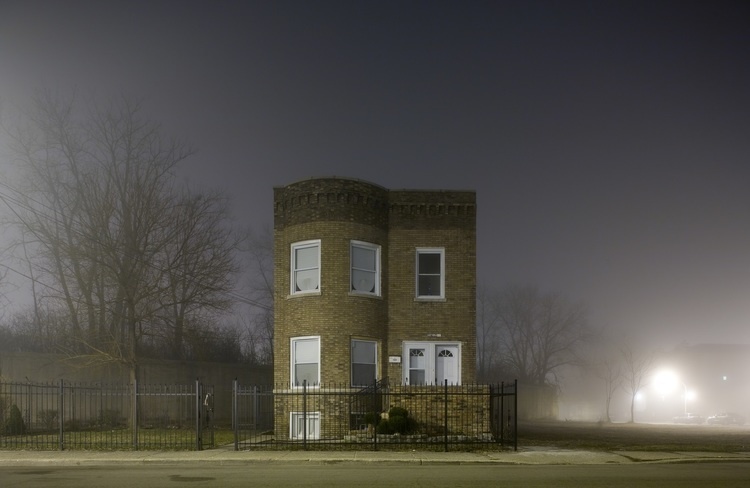