The Jackson Junge Gallery presents SALT TO SAND, its second solo exhibition of 2019. This exhibition features paintings by Benjye Troob, created at her home studios on Cape Cod and in Arizona. The opening will be hosted on Friday, April 12, 2019, with an artist’s reception from 6-9 pm. Admission is FREE to the public.

SALT TO SAND is an exhibition that features paintings from Cape Cod and Scottsdale, AZ. These two places are where painter, Benjye Troob, seasonally lives and is inspired by. Originally from New York, Troob’s artistic career blossomed while living in Chicago. Troob’s style has evolved from predominately working with the figure to a free flowing impressionist style. SALT TO SAND, brings both places together in a way that shows the similarities and differences in these two diverse environments.

Benjye’s vision is equally inspired by the light and landscapes of the Cape and the desert. When asked to embellish on her creative process, Troob states, “I start by laying down the colors until I begin to visualize shapes. At that time, I use charcoal to define the landscape and start to layer from there. I started my career by working predominantly with the figure and have learned to gesture draw as opposed to sketching. These paintings can be all about movement and are done quickly so I can paint plein air and not get caught up in my head.” Troob uses vibrant and pastel colors, rhythmic movements and overlapping shapes throughout most of her pieces, inviting the viewer into an exciting and expressive world of art. Troob has expressed that the main difference between each place is the light. On the Cape, the light is soft caused by the ever present humidity, which results in her unique perception of her use of colors. Troob takes advantage of this natural phenomena and paints with different shades of green, blue and yellow that flow through the landscape and create the impressionist look she is known for. In contrast, the desert air described by Troob is dry and crisp. Her aired paintings define the plant life and skies that take on the desert colors. “The Painted Desert” is visualized well where she lives and influences the prominent usage of orange and ochre. The hue of the orangey-red sunset reflects purple, another prominent color in Troobs paintings, thus creating warmth throughout the painting.

Troob attended The Art Students League of New York, and while in Chicago she remained an avid student of “life figure drawing.” She has shown her works at Lotton Gallery on Michigan Avenue and H. Marion Studio in Wilmett, IL. Troob’s work is displayed both commercially and in private collection throughout the United states and Europe. Now, Troob is represented by Jackson Junge Gallery. 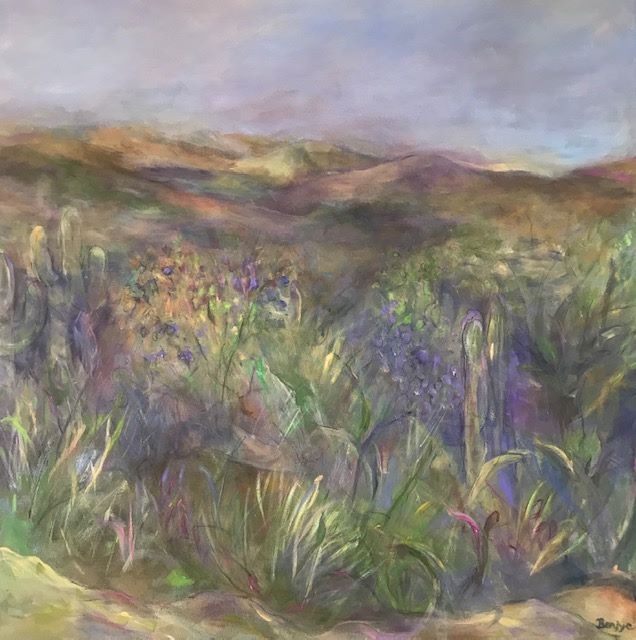