Ghosts haunt, maybe it’s as simple as that: They trace your steps in this empty house you have to spend the night at because your car broke down; they appear whenever they want (usually when you walk down the stairs into the basement); and at times, they might even scare you. Maybe you could describe ghosts as infrastructures of the past, as invisible non-form, as beings trapped-in-repetition, as remnants of former lovers. Or you could just say, a ghost is a structurally complex and functionally simple entity—a black box.

In Ken McMullen’s film Ghost Dance (1983), when asked by actress Pascale Ogier whether he believes in ghosts, philosopher Jacques Derrida responds almost schematically: Film is an art of ghosts and cinema is the art of allowing ghosts to come back. Or, more precisely, cinema is the “science of ghosts.” Hito Steyerl would expand on this ghostly science in her seminal In Defense of the Poor Image (2009): These billions of GIFS and memes posted on 4Chan and reddit, these unmotivated signifiers floating on the web, are effectively the “ghost of an image.” That is, if in “the class society of images cinema takes on the role of a flagship store,” it’s Steyerl’s economy of the poor image that has truly unleashed the production and circulation of ghosts. We are surrounded by them without even having to enter cinema’s ghostly black box.

A Ghost Is A Ghost Is A Ghost Is A Ghost inquires into the art and science of ghosts, well aware of its internal class divisions: Taking on forms that are both personal and political, individual and collective, analogue and digital, the selection of films and videos explores how this grand ghostly black box might in fact not just be scary but also a first step out of this mess we find ourselves surrounded by. 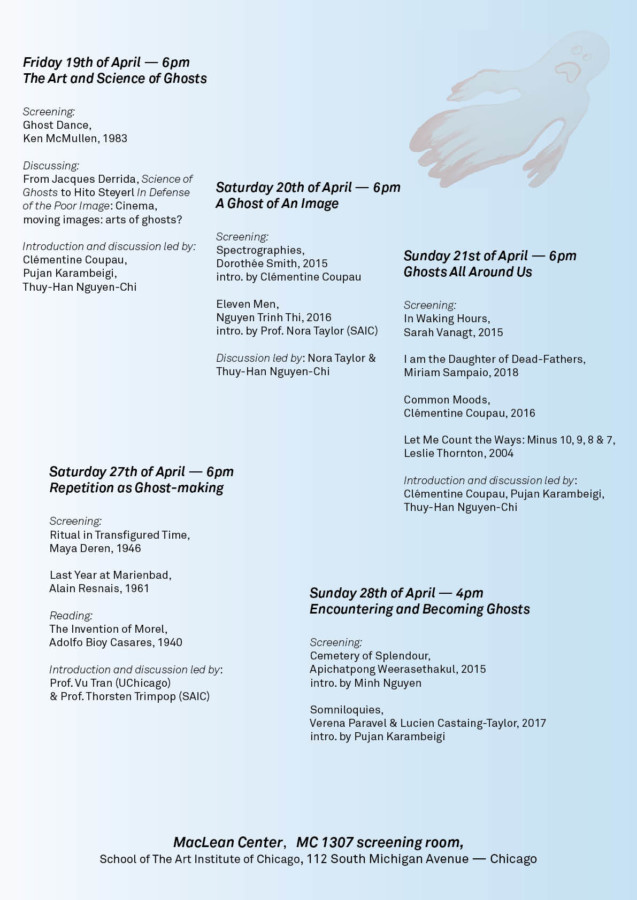