The Jackson Junge Gallery presents TIME, its second group exhibition of their 2019 season. This exhibit features 20 works of art in various mediums by artists from around the world. The opening will be hosted on Friday, March 15, 2019, with an artist’s reception from 6-10 PM. Admission is FREE to the public.

Time is a thought-provoking concept due to its many definitions and interpretations. For this exhibition, artists were encouraged to bring forth their own understandings of time. The concept of time has been the subject of study in many different fields, including the arts, sociology, geology, biology and physics. When defined as a noun, time is “the indefinite continued progress of existence and events in the past, present, and future regarded as a whole” (Merriam-Webster Dictionary). In this exhibition, the artists’ discussion revolves around time as an illusion, time’s effect on human life and time in regard to the environment.

In an attempt to solidify time as a measurement, the calendar and clock have been used to document human experience in history, the present and an anticipated future. Though one is able to observe “time” by monitoring the mechanical arms of a clock or by watching the sun / moon move across the sky, that physical movement as a measurement can be interpreted as an illusion that is not so easily numerically defined. Iwona Duniec visualizes this thought in her painting, “Lost Time.” Duniec states, “this painting represents the theory that time doesn’t exist and is an illusion. No observer has knowledge of a distant event, or the simultaneity of different events until they are unambiguously in that observer’s past.” Duniec’s painting portrays a free-floating, deconstructed clock suggesting that the clock is creating an illusion of time. When telling time with clocks, we are looking for a specific fleeting moment in time and often disregard that that moment has already come and gone. We have created these machines for “accuracy” but as living beings, we cannot comprehend that accuracy to its fullest. It can only function with simplified and approximate measures. However, we rely on this accuracy to make appointments, meet deadlines, and catch public transportation. For example, since 1871, Grand Central Station in New York City has witnessed many people crossing each other’s paths. In her piece, “Time Travelers,” Federica Ghidelli has taken a time laps photograph of Grand Central Station. She observes, “the time has stopped there. People are still looking at the main clock before catching the train. People still rush to the platform. People are still emotional while saying goodbyes and waving their hands. People still hug and laugh while welcoming someone back. People are still brushing against each other just for a split of a second. The station remains today a place of transit and still reminds us of the many men and women of the past who walked on the same pavement.” Ghidelli like Duniec, questions how time captures the human experience and whether or not time is ever flowing or is a manufactured illusion that tracks our experience.

In conjunction with man-made measures of time, a person’s lifespan is another tool for marking time. This perspective of time naturally evokes personal reflection on one’s life and memories. Memories are created by connecting with others and are re-lived in storytelling. Physically, time is observed through both the aging of living beings and the changing structures on Earth. Michelle Boggess’s piece, “Memories of Marigold” depicts an elderly woman peering over a fence at a young boy smelling the flowers she offers. Boggess explains, “this painting symbolizes how time can pass by and act like a wall between then and now. Sometimes so much can change that it might feel like an entirely different world. While the young boy smells the elderly woman’s flowers, a little color appears in her eyes and attaches itself to her grey world.” The passage of time can often be overlooked until one is in their later years reflecting on their youth. But what about living in the present? Ken Clark’s piece, “A Propos De Nice” is a time laps photograph of a profile swinging back and forth, which symbolizes how human kind often focuses on the past and future. Clark says, “Time is like a pendulum. Swing one way it is the dreams and aspirations. Swing the other way it is the memories. In between these two extremes is the present.” If people are to truly live in the present moment, they often “lose track of time.” This poses a question of how often one actually lives in the present and does not reflect on the past or anticipate the future.

Time measured through the observable changes in the Earth has captured the interest of many scientists and artists. Scientists have been able to determine the age of our planet by radiometric dating meteorites. The Earth is over 4 billion years old. In the 200,000 years that humanoids have been on the planet, we have observed through our own eyes and through research how the Earth has changed over time. One way that humans have accelerated the transformation of the planet has been by depleting the earth of its natural resources. In Tom Duffy’s piece “Where Have All the Forests Gone?” the viewer can see a double exposure of the forest in the past and the deforestation equipment as the present. Duffy says, “South Central Indiana is a hilly richly forested area, but it also is the location of the best limestone in the country. The limestone from this area was used to build the pentagon, National Cathedral, Empire State Building, and almost half of the state capital buildings, among many other structures and homes. The financial benefit of the limestone has far outweighed saving our natural forests, so we find continuing conversion of forests to deep quarries as reflected in this photograph.” The continued use of limestone, with disregard to the deep scarring that it creates, plays into the historical precedent as a grand building material throughout history. This obsession with using natural resources that have been on this planet long before we were and with living up to our past accomplishments, shows our continued need to re-create our past in the hopes for a “better” future.

Time is endless. However, in our world today, time is considered one of the most valuable assets. To visualize and experience different interpretations of time, the exhibition TIME will inspire one to explore further investigation into their own understandings and how one values their own time. 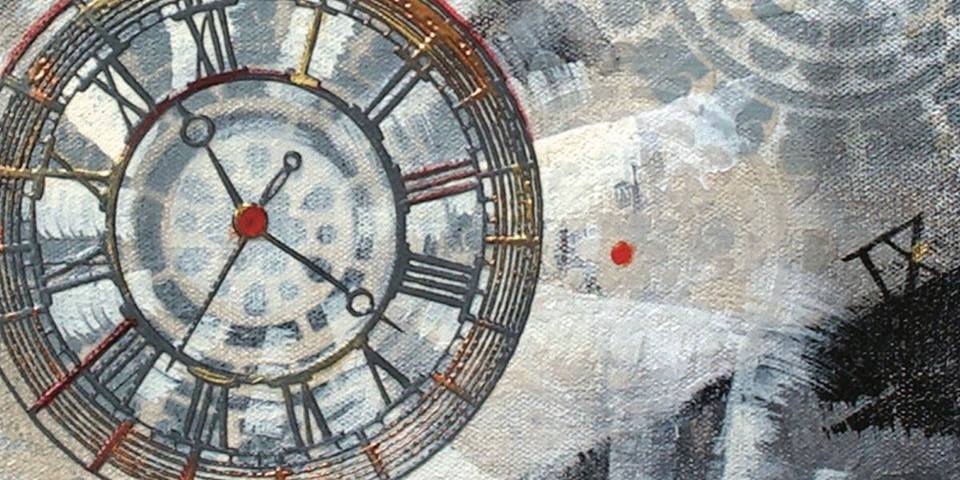