On view through Saturday, April 6th

se·quence
/ˈsēkwəns/
noun
plural noun: sequences
1. a set of related events, movements, or things that follow each other in a particular order.

What do these three artists have in common? Beyond the fact that they all originally hail from Chicago, these artists are passionate about combining techniques rooted in graffiti with fine & abstract art components.

All three artists will be showing brand new original works, on canvas and wood, with some mixed media surprises. Two brand new murals will be revealed the night of the opening reception and the show will be on display though 4/6/19

Ruben Aguirre (b. 1979, Chicago, IL) is a Chicago based painter who is expanding on the roots of style writing with a non narrative approach to mural painting. His interest lies in drawing attention to underutilized infrastructure as a potential canvas. He has produced a number of murals in the Chicago area, across the U.S., and abroad. Aguirre’s work is an intersection of abstract graffiti, formalism, and mural painting. His work is informed by architecture and plays with re-imagining public space, while investigating pattern, hard edge painting, and color field through the use of the spray can, with traces of typographic letter structure from his graffiti roots. He has exhibited in The National Museum of Mexican Art, the Chicago Cultural Center, and in the Hyde Park Art Center. His work has been covered by the Atlantic, and the Washington Post. Aguirre’s public works have been commissioned for schools, residential spaces, private businesses, as well as various neighborhood development organizations, and clients such as Adidas, Linked IN, and McGraw Hill.

Daniel Burnett is a full time working artist currently based out of St. Louis, MO. Originally from the Chicago area, his career was largely influenced by the sounds and sights of the city. Daniel’s work is characterized by intricacies and clean lines entangled in the abstract. He has been known to get an unreasonable amount of pleasure from painting a clean line. Experimenting with the relationships between various colors might be the most valuable part of his practice. He enjoys classic fiction, and is most influenced by literature. Though the individual works are purely aesthetic, he incorporates a theme into every show – usually a half-baked investigation into something he’s read such as Kierkegaard’s concept of faith and how it relates to the artist. Daniel’s work goes beyond studio work and truly emerged from the world of aerosol and graffiti based techniques.

David Fratu (aka ILL.DES) is an artist, originally from the Chicagoland area, now living and working in Atlanta, GA. His style of painting represents a balance between chaos and order. Using gradients of color and intricate patterns, he creates a sense of depth and movement. Viewers are drawn into his illusive designs filled with vibrant colors, geometric shapes, and organic line work. Together, his unique symmetrical compositions form a perfect equilibrium of harmony and discord. David has large scale murals all over Atlanta and dozens of other US cities- including Chicago. He first showed his work in Chicago at the Chicago Truborn 5 Year anniversary show in which all five pieces sold. 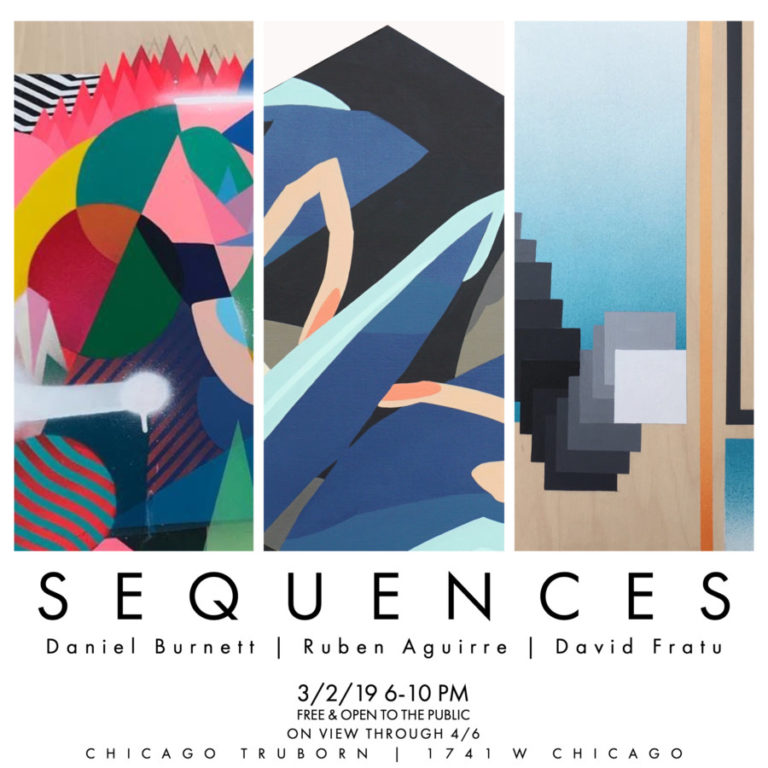