“A moving image can be described simply as a series of frames that when played in rapid sequence, produce a picture that is seemingly in motion. Yet beyond its mechanics lies a versatile medium where the lens takes on different roles and the image itself becomes a malleable material to be shaped and transformed.

In each program, the moving image is an eye that both disorients our focus and redirects our gaze. It is a guide leading us to places of intimate uncertainty; a narrator explaining to us the unknown. It is a rotating door opening to otherworldly terrains and spaces adrift in micro-cosmic dimensions. It is a collage canvas, a constructed surface, a stage set, and a sound box perfectly sized for a dissonant piece of wavering choreography.

For Moving_Image_00:05, we celebrate a range of works by artists who share their vision and craft, stretching the boundaries of this ever shifting medium. it is a testament to Chicago’s diverse breadth of creative ingenuity.”

PLEASE NOTE THIS EVENT IS NOT WHEELCHAIR ACCESSIBLE.

About Rana (Moving_Image_00:05 Guest Curator):
Rana Siegel is a visual artist living in Chicago. She has exhibited most recently at ACRE, Goldfinch, and Flatland Gallery in Houston, Texas. This past summer, she completed a year-long Jewish Artists Fellowship at the Spertus Institute in Chicago.. Currently, Rana works at the School of the Art Institute of Chicago as the Senior Administrative Director for five studio departments, applying her creative sensibilities towards her approach in academic administration.She holds an MFA in Fiber and Material Studies from the School of the Art Institute of Chicago (2008) and a BFA in Crafts from The University of the Arts in Philadelphia (2001).

About Heaven Gallery (Moving_Image_00:05 Hosting Organization):
Heaven Gallery is a non-profit gallery and multi-disciplinary arts space in Chicago’s Wicker Park neighborhood that has been presenting emerging artists and musicians since 2000. 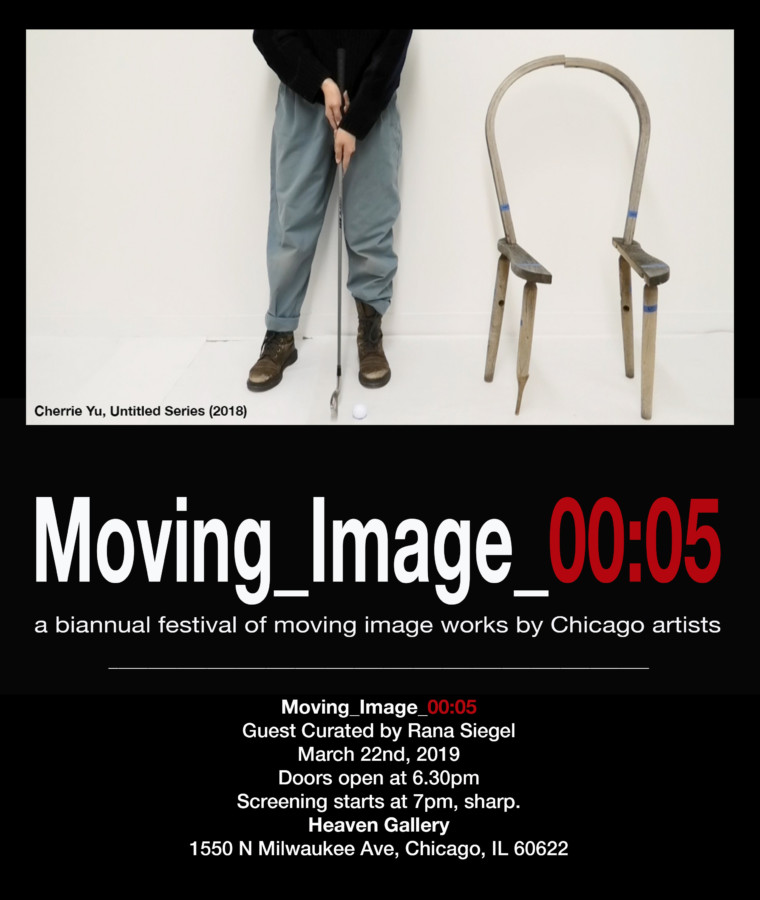