In a wooded clearing, a sweaty pro wrestler’s truncated torso, projects a survival knife from an invisible blowgun. Next to him, a faceless and blue cowpoke floats in a field of wildflowers seen through a chain link fence. On the blank page of a picture album, faces of parole violators and vagrants are arranged in a yearbook grid. Each one could be a cousin, a sister’s boyfriend, but never partner or lover. The works in Fumbling Heart float in the same soup, one that simmers with repression, and has the odor of desperate longing.

My thinking is compulsively narrative, and I do no favors with all the fiction I read. Among the works in this show are four oil paintings of the same motif: a millworker’s house has crushed a booted figure. It is the house that lifted Dorothy, and here it has landed with finality. The four titles are taken from James Purdy’s 1972 novel I Am Elijah Thrush. I am currently making my way through the works of James Purdy, who portrays male attraction in the 1920s with impossible frankness, creating tension not because of repression, but because of the fraught nature of loving. Blood is spilled, and loneliness is resolute.

The fiction I employ could be classified as regional and insistently American. I place one century next to another, to acknowledge a fraught past that is contained in any representation of this country. I consider my works’ materiality as important as the characters I depict. Equally significant is my hand that models a form, and the style it can mimic. Two vessels, referencing pre-Columbian ceramics, wear shoulder pads and a jock strap. They are titled Urinal End and Urinal Guard. These containers were originally made in response to a group of pictures I took in 2014 of truck drivers, that I photographed without permission. As these ‘dads on thrones’ drove past at 70mph, I leaned out the passenger side window of a neighboring vehicle, and stole an image. The urinals are fictive gifts, or a false amends, and they act simultaneously as atonement and transgression.

One would be right in saying that my gaze is directed by desire. But my fascination is with the complexity of desire’s origin, and the ways in which it dictates behavior. I’m talking about an arousal template molded from the home interior and one’s own family unit, as well as from societal givens. For me the jewel is how this internal “carrot on a stick” has the potential to complicate a moral compass, and I am most interested in this trouble. Not as a boy taking pleasure in being naughty, but as man baffled by his own fumbling heart. 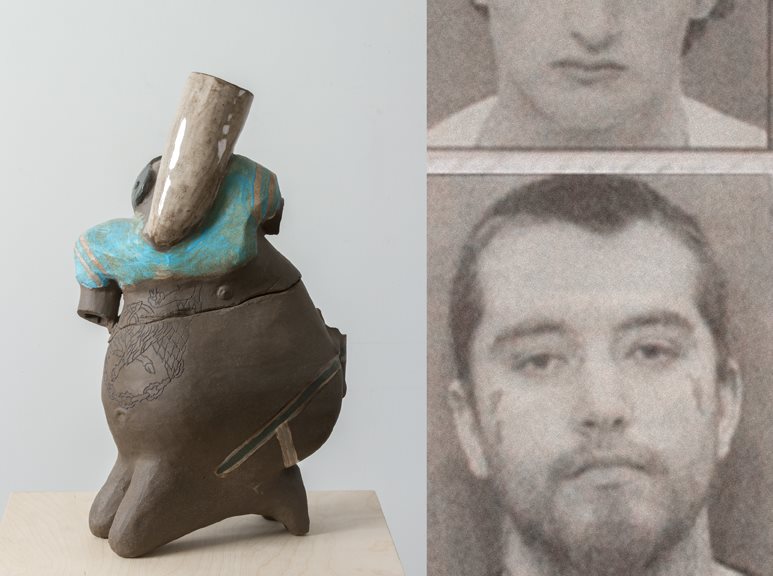