The world can never be exactly what you want it to be.

The work in “the world can never be exactly what you want it to be” addresses and puts on display the feeling of unease that living in the United States today imparts. This show grapples with these ideas through painting, sculpture, fiber, and installation. Mayorga, Bowman, and Hilshorst all bring up issues related to gender and identity in their use of material, technique, and subject matter. With themes of the domestic and kitsch a common bond is created throughout the work. Objects celebrate disappointments, paintings created with piping bags and candy colors leave a bad taste in your mouth, and common domestic subjects and images sag, drip, and crack. The work is political in the way it subverts and perverts its subject matter, and nothing is how you want it to be.

Tanner Bowman is a product designer and artist in Chicago IL. Bowman is interested in the intersections between art, design, and craft and is currently producing objects that question the functionality of art in the domestic space. Through playing with traditional crafting techniques with an experimental playfulness, Bowman creates queer and modern objects that give the audience a place to question their surroundings. Tanner’s work is often a tedious process that pushes craftsmanship. Considered an anti- industrial designer, he believes that the most valuable object is one which a person can see and feel emotional labor the maker puts into it.

Bowman received his BFA from The School of the Art Institute of Chicago in 2015. He has shown his work at internationally at Rossana Orlandi Gallery Milan, Musée des Arts Décoratifs Paris, and Super Design Gallery for the London Design Festival. Bowman has also shown locally at Typeforce at Co-prosperity Sphere, Final Resting Place Gallery, and most recently had work sold and exhibited at the Museum of Contemporary Art Chicago Store.

Matthew Hilshorst is a painter and sculptor living in Chicago. He uses wit, humor, and eye-catching colors to lure a viewer. His work is at first playful, decorative, and familiar but reveals itself to be sad and sinister on closer inspection. His objects literally droop and sag with sarcasm and the physical weight of the world.

Hilshorst received his MFA in painting and drawing from the School of the Art Institute of Chicago. He has recently had work at Andrew Rafacz gallery, LVL3, The Condo Association, and Slow gallery in Chicago. He has shown work at Shoot the Lobster and Bureau in New York, as well as other galleries around the country. He is currently preparing for a solo show at Andrew Rafacz gallery in the summer of 2019.

Yvette Mayorga is an interdisciplinary artist. She uses confection, industrial materials, and American commodities as a conceptual framework to juxtapose the borderlands of the U.S. and Mexico. The spaces in the “Candy Lands” of her work relate to immigrant utopian visions of the American Dream. The smell, decoration, and iconography in her work serve to critique the glut of violence at the border.

Mayorga has presented her work at The Vincent Price Art Museum, the School of the Art Institute of Chicago, EXPO, LACMA’s Pacific Standard Time, The Chicago Cultural Center, The National Museum of Mexican Art, University of Indianapolis, The Arts Incubator, Roots and Culture, Weinberg/Newton, Gallery 400, Ukraine Institute of Modern Art, & GEARY Contemporary.
Mayorga received her MFA in Fiber and Material Studies from the School of the Art Institute of Chicago. She was featured in The Guardian, Artforum, The Inter University Program for Latino Research, Art News, Artnet, REMEZCLA, Teen Vogue, Hyperallergic, and on the cover of the READER.

Tags: Chicago, Heaven Gallery, Matthew Hilshorst, Tanner Bowman, The world can never be exactly what you want it to be., West Town, Yvette Mayorga 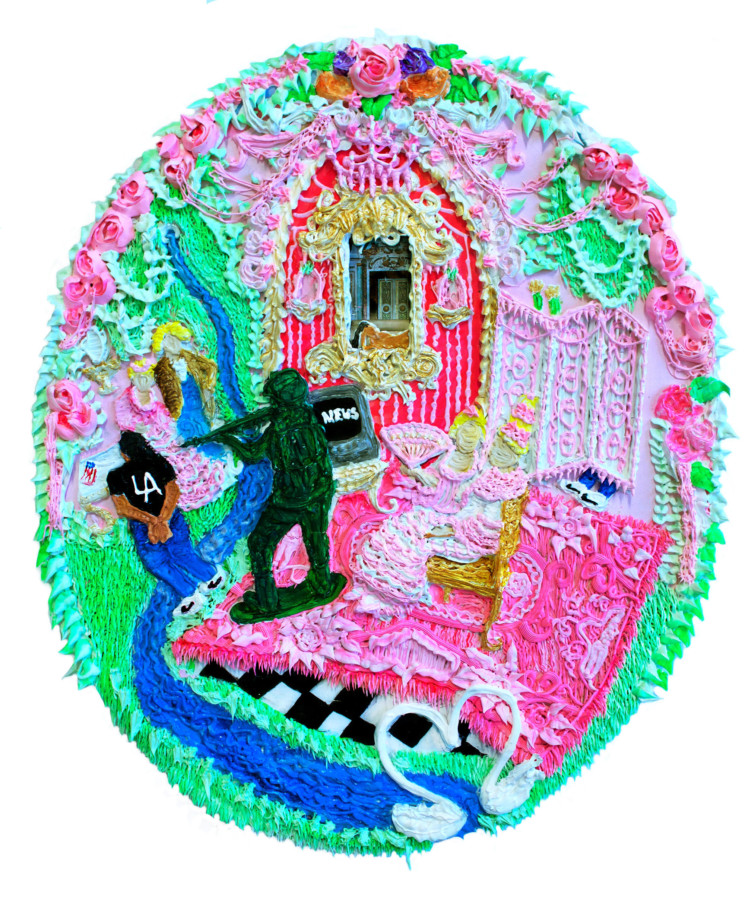