The L.A. Uprising: Before, During, and Is It Over

Screening of Message to the Grassroots: “The L.A. Uprising: Before, During, and… Is It Over?” and Q&A with Producer Nancy Buchanan

So begins this program in the words of activist, organizer, and host of Pasadena-based cable access program Message to the Grassroots, Michael Zinzun. 27 years later, we are still grappling with the impact of the upheaval in Los Angeles in 1992 following the acquittal of the police officers whose criminal acts were watched by the whole world.

“The L.A. Uprising: Before, During, and… Is It Over?” is an hour-long documentary that aired in June 1992, just two months after the uprising. Produced by community organizers already well-embedded in the movement for police justice in Los Angeles, it explores the history of LAPD misconduct and violence, the Rodney King case, as well as the community’s own vision for the future.

Following the screening will be a Q&A with producer Nancy Buchanan, a Los Angeles-based video artist. From 1988-1998, she produced “Message to the Grassroots” with former Black Panther and community activist Michael Zinzun (1949-2006). Zinzun co-founded the Coalition Against Police Abuse in the early 1970s, and he worked with the families of those injured or killed by police; his show often focused on police brutality and other issues concerning social justice.

Fifteen episodes of “Message to the Grassroots” are now available to the public for the first time through the work of the Media Burn Archive and the support of the National Endowment for the Arts. Media Burn is a Chicago-based nonprofit that collects, preserves, and distributes documentary video and television produced by artists, activists, and community groups. Their mission is to use archival media to deepen context and encourage critical thought through a social justice lens.

Photo caption: Michael Zinzun reporting from the wreckage of a bookstore in Los Angeles, June 1992.

May through September- The Supreme Court of the United States

Tags: Chicago, Illinois, Lower West Side, Nancy Buchanan, The L.A. Uprising: Before During and Is It Over, Uri-Eichen Gallery 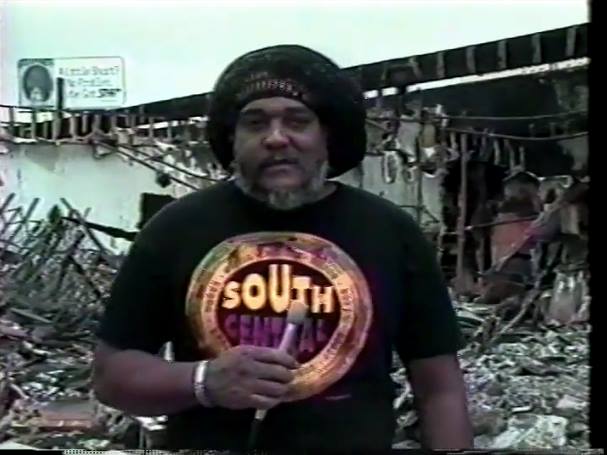