Calculus, a study of limits

On view through Saturday, March 2nd

Formula. When we are trying to reduce a relationship observed in natural phenomena to something that can be measured, arrival at the formula is the sought after victory. Eureka. In art, formula is usually the sounding of a death knell. Matt Kayhoe Brett and Boris Ostrerov begin with that culmination. Each has established systems with imposed limitations, using the limits to get to places one simply can’t without them.

Matt uses the inherent grid of unit relations in fencing material to produce reduced forms. His bulky masses flirt with the ether, with being idea more than object. They are not all the way solid; they feel like graphic images of themselves. Boris defies illusion on the picture plane. He squeezes paint out of tubes. He is not painting images of masses, he is stacking colored materials to make form. His forms don’t have a pictorial description of weight or solidity, they are literally hefty, literally sitting on the picture plane.

Formulaic art typically leads to cold streamlined precision. These artists harness their rules to build unexpected wit and warmth. Matt has built sculptures of figures found in Duchamp’s opus, The Bride Stripped Bare by Her Bachelors, Even. Matt’s structures are metaphors for systems which strip the public bare. Boris toys with things Minimalism denies itself: indulgence, decoration, and excess. 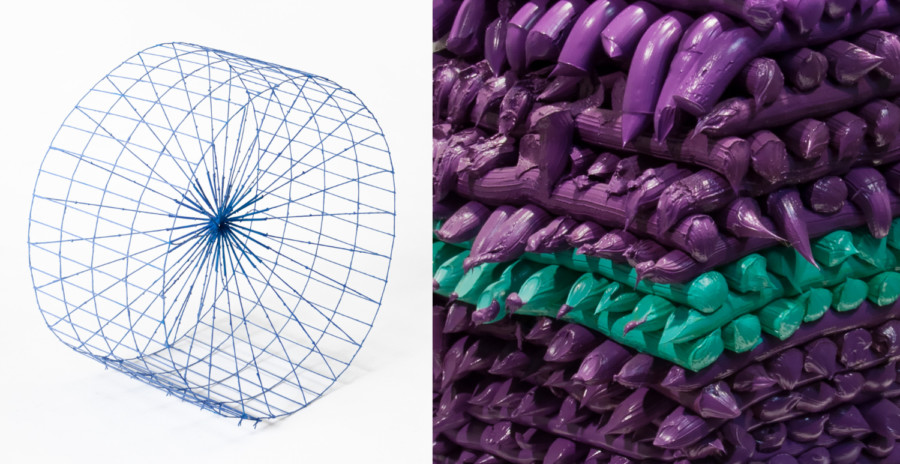