Queer Film Series: Ep 9: The Beginning of AIDS part I

Happy New Year and looking forward to another full year of examining LGBTQ representation in film!

First off, we’ll be jumping around to a few new spaces over the next couple months, our old space, The Learning Machine is taking the rest of this winter off, so please bare in mind the address of where the screenings take place!

We’ll be spending roughly half of this year looking at and talking about AIDS and its impact on the course of LGBT community through the 1980s. I’ll be switching off in-between with more “feel-good” films, especially with the rise of LGBT people in more prominent mainstream films as well as looking further out into a few foreign films that start to finally make their presence known as well. We’ll start the year as the decade started, the rise of a new disease that seemingly struck the gay male community with little remorse and would ultimately alter the shape of not only the gay community but the world at large.

Although I wont be able to give as deep a perspective on AIDS as I’d like, if you have little to no prior knowledge about the AIDS pandemic, I highly encourage you and your friends to come out and learn a little bit about and spend some time doing your own research.

“The Age of AIDS” (2006) Directed by Greg Barker and William Cran. On the 25th anniversary of the first diagnosed cases of AIDS, FRONTLINE examines one of the worst pandemics the world has ever known. After a quarter-century of political denial and social stigma, of stunning scientific breakthroughs, bitter policy battles and inadequate prevention campaigns, HIV/AIDS continues to spread rapidly throughout much of the world. Through interviews with AIDS researchers, world leaders, activists, and patients, FRONTLINE investigates the science, politics, and human cost of this fateful disease and asks: What are the lessons of the past, and what can be done to stop AIDS?

“Buddies” (1985) Directed by Arthur J. Bressan Jr., One of the first feature length films to openly talk about AIDS follows a New York City gay man, in a monogamous relationship, becoming a “buddy” or a volunteer friend to another gay man dying of AIDS and the friendship that develops.

I’m doing my best to read-up on as much LGBTQ film theory/history as I can and will be happy to moderate discussion after the films have been shown!

Please be considerate of the audience and subject-mater, Hoyne House Co-Op is a safe-space and anyone who acts otherwise will be asked to leave.

Please plan to arrive by 6pm at latest!! The first film runs a bit long and I will be starting on time!! I will also have free preventative information about HIV/AIDS and condoms thanks to my friend Paul who works for Howard Brown.

Bring your friends!! SRSLY, having trouble getting LGBTQ people to show up! Makes me sad, but you do you babes.
BYOB and BYOP (Bring your own pillow for comfort!!) 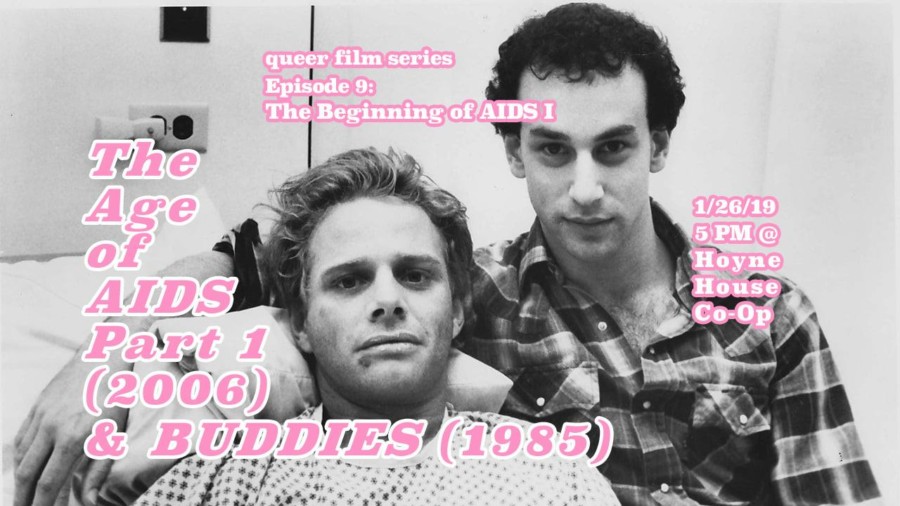