Caravans of Gold, Fragments in Time

On view through Sunday, July 21st

Journey to a medieval world with Africa at its center.

Travel with the Block Museum along routes crossing the Sahara Desert to a time when West African gold fueled expansive trade and drove the movement of people, culture, and religious beliefs.

Caravans of Gold is the first major exhibition addressing the scope of Saharan trade and the shared history of West Africa, the Middle East, North Africa, and Europe from the eighth to sixteenth centuries. Weaving stories about interconnected histories, the exhibition showcases the objects and ideas that connected at the crossroads of the medieval Sahara and celebrates West Africa’s historic and underrecognized global significance.

Presenting more than 250 artworks spanning five centuries and a vast geographic expanse, the exhibition features unprecedented loans from partner institutions in Mali, Morocco, and Nigeria, many of which will be seen in North America for the first time.

Caravans and Crossroads: Art, Music, and Stories
Open house throughout The Block, 10:30 AM – 1 PM

Drop by the Block for an all-ages celebration inspired by Caravans of Gold and be among the first to explore the exhibition. Join Chicago artist Rhonda Wheatley in a hands-on activity exploring the powerful stories that objects tell. Experience live West African music and DJ sets throughout the museum featuring special guest, seventh-generation Jeli (griot) Morikeba Kouyate. A master of the kora, Kouyate translates the oral history and legends from medieval West Africa to the present day.

“Africa is forcing those who will listen to reconsider the continent.” – Gus Casely-Hayford

Renowned speakers include Chris Abani, Nigerian-born novelist, poet, and essayist and winner of 2009 Guggenheim Award; Gus Casely Hayford, Director of the National Museum of African Art, Smithsonian Institution in Washington, D.C, and host of the BBC’s Lost Kingdoms of Africa. They will be joined by Caravans of Gold curator Kathleen Bickford Berzock, the Block’s Associate Director of Curatorial Affairs and former curator of African Art at the Art Institute of Chicago. Taking up themes from the exhibition, this panel will consider the relationships between history, power, and imagination, and ask what trans-Saharan exchange from the distant past can tell us about movement and migration today. Jonathan Holloway, Provost of Northwestern University and Professor of History and African American Studies, and Annelise Riles, Executive Director of the Buffett Institute at Northwestern and Associate Provost for Global Affairs will provide welcoming remarks.

This program is generously supported by The Alumnae of Northwestern University. 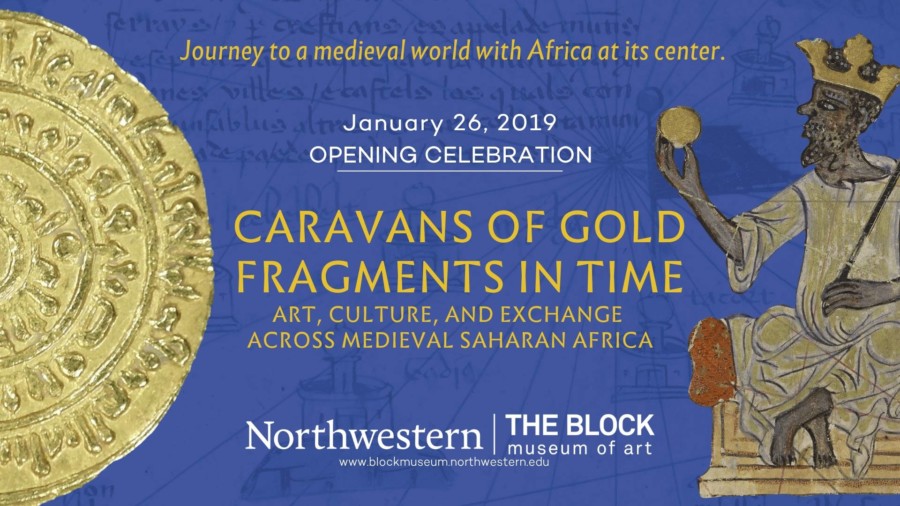