Shadows of Echoes of Memories of Songs

SideCar will be hosting a video screening curated by Jesse Malmed on Sunday, December 9th at 5pm.

Please join us for ‘Shadows of Echoes of Memories of Songs’, a video screening curated by Jesse Malmed. Jesse has gathered these short film together and will present them in conjunction with the works on view in the current exhibition ‘Annex’ – Ben Murray. This screening will serve as a closing to the exhibition.

A native of Santa Fe, he earned his BA from Bard College and his MFA from the University of Illinois at Chicago. He was named a “2014 Breakout Artist” by Newcity.

He is an Associate Adjunct Professor at the University of Illinois at Chicago and teaches in the Chicago Public Schools through CAPE.

He is the lead singer of The Fucs (a Fugs cover band) and was profiled recently in Newcity’s Film 50.

Please join us Sunday, December 9th! We will begin the program promptly at 5 PM.

Gallery Hours through the run of exhibitions: Saturday, 1 PM – 6 PM and by appointment 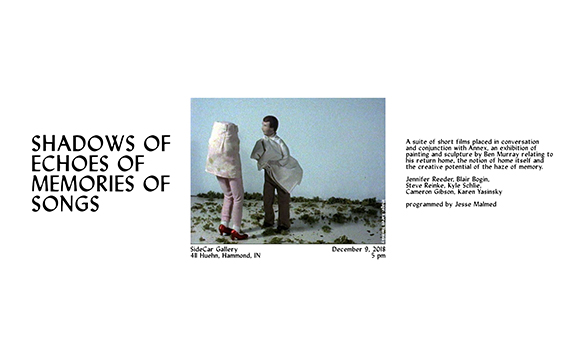