On view through Saturday, January 12th

Co-Prosperity Sphere is a cultural nexus in Chicago. It is the home of Lumpen Radio, the site of countless events and exhibitions, an active concert venue, and its stationary bar has been known to serve more than one wedding reception. Co-Prosperity welcomes hundreds of guests, its ever-changing dynamics not completely unlike that of an airport terminal. Even its overhead rainbow lighting triggers notions of O’Hare’s neon walkway tunnel. Inspired by the movement surrounding and within Co-Prosperity Sphere, In Transit is an exhibition that examines the concept of “travel” and how the word assumes different meanings depending on context. Using the word itself as a prompt and a single point of unification, artists Catherine Feliz, Allison Lacher & Jeff Robinson, Ahmed Ozsever, and Nayeon Yang explore travel’s relationship with light, space, labor, and time.

Travel exists in the physical and also in the abstract. We travel with time, though this ceaseless movement remains invisible. Similarly, light and sound travel at speeds undetectable to the human eyes and ears respectively, calculated through science rather than observation. Installation artists Catherine Feliz and Nayeon Yang both focus on travel as an abstract concept; their work promotes a bodily awareness, encouraging audiences to be mindful of the ways their physical beings occupy space. Within In Transit, Feliz creates an immersive work that investigates the power of water translated across cultural symbols, materials, and language. Using video and sound, her work encourages viewers to allow their consciousness to travel and “see a larger picture.”

Yang’s practice connects travel with the ephemeral, using the body as object. She views the body as home, a vessel through which time and space pass, leaving behind invisible markers: memories, thoughts, and emotions. In her current work, she employs mirrors to reflect audience members back upon themselves, forcing a spatial and mental consciousness. In this simple gesture, glass delicately envelops viewers in light and movement, changing their roles from passive to active participants.

Constantly traversing the Midwest by car, collaborators Allison Lacher and Jeff Robinson have become extremely familiar with its corn-filled terrain and its green highway markers. Within In Transit, they draw upon their physical experiences as a way to process the meaning of the word “travel,” using vinyl that is akin to reflective road signs and agricultural symbols to bring life to the mundane sights that quickly become blurs in the rear-view window. Ahmed Ozsever’s work also thinks through travel in a literal sense, and how it relates to personal histories, family lineage and immigration. Through sound and materials associated with shipping, he explores inter and cross-continental movement, patterns of communication, and architecture as language.

Catherine Feliz is an interdisciplinary artist, full spectrum doula, and community medicine-maker born and raised in NYC (occupied Lenape territory). Her multimedia projects are personal reflections on the social-political constructions of power and knowledge. Through applying the languages of visual desire and the practices of care, they’re interested in imagining new narratives of place that center the experiences of politicized bodies. Catherine’s identities as a queer, diasporic, bilingual, and afro-latinx inform her love-powered community healing practices and the founding of Abuela Taught Me, a modern pop-up botanica. In 2017, they received a BFA in Photography from SUNY Purchase College of Art + Design. She has attended ACRE Residency, Summer Forum for Inquiry + Exchange, and her work has been featured in galleries such as BRIC Arts Media.

Allison Lacher is an artist and curator based in Springfield, IL. She is the Exhibitions Manager at the University of Illinois Visual Arts Gallery and she is a founding member of the artist-owned gallery Monaco in St. Louis, MO. In 2013 she Co-founded DEMO Project, a space for contemporary art in Springfield, IL, and served as Co-director of the space until its demolition in 2018. She has exhibited at venues that include E.TAY Gallery, The Luminary, Utah Museum of Contemporary Art, PDX Contemporary Art, CUAC Contemporary, Future Tenant, Grounds for Sculpture, and the Illinois State Museum. She has been awarded artist residencies with ACRE, Spiro Arts, Prairie Center of the Arts, Vermont Studio Center, The Luminary, and Signal Fire on US/Mexico borderlands. She was a HATCH Projects curatorial resident with the Chicago Artists Coalition and is a previous recipient of the Illinois Arts Council Fellowship Award. In addition to her independent studio practice, she maintains an active collaborative practice with artist Jeff Robinson. Recent collaborative projects have taken place at Illinois State University Galleries, Hyde Park Art Center, RomanSusan, Outhaus, Ski Club, and the 3rd Terrain Biennial.

Ahmed Ozsever is an interdisciplinary artist based in Chicago. He works in installation and embraces architectural anomalies, as well as the hidden histories of a given location and exhibition space. His background in photography informs his recurring interest in the process, and limitations of the photographic way of looking. Ahmed’s work explores the articulation and perception of constructed temporalities, mediated experiences of land(scape), and the peculiar human traces inscribed in quotidian spaces. Ahmed earned his BFA in Photography from Herron School of Art in Indianapolis, IN and received his MFA from Cornell University in 2015. Ahmed’s independent and collaborative works have been exhibited at the HF Johnson Gallery at Carthage College, Gallery19 in Chicago, Terrain Biennial: Outpost Enos Park in Springfield, IL, and station923 in Ithaca, NY, among others. He attended ACRE residency in 2017 and is currently a CORE resident at Chicago Art Department. Ahmed teaches in the department of Contemporary Practices at School of the Art Institute of Chicago.

Jeff Robinson is an artist and curator based in both Chicago and Springfield, Illinois. He received his MFA degree from Illinois State University in 2011. Robinson has exhibited independently and collaboratively at numerous venues including Hyde Park Art Center (Chicago), RomanSusan (Chicago), Ski Club (Milwaukee), University Galleries of Illinois State University (Normal), Rosalux Gallery (Minneapolis), Outhaus (Urbana), and E. Tay (New York). His work has been published in New American Paintings and MANIFEST Gallery’s International Painting Annual. His work has been featured on Daily Serving, in NewCity Magazine (Chicago), FLOORR Magazine (London) and in the Riverfront Times (St. Louis), among others. He is a previous recipient of an Individual Artist Support Grant from the Illinois Arts Council. Robinson has worked as artist-in-residence at Ragdale (2017) and ACRE (2017). In addition to his studio practice, Robinson serves as Instructor of Art at the University of Illinois Springfield and as Director of the UIS Visual Arts Gallery. He also served as co-director (and co-founder) of DEMO Project until its demolition in early 2018.

Lauren Leving is a Chicago-based writer and curator. She is the Exhibitions Manager at Wrightwood 659, a new gallery space focused on the intersections of art, activism, and architecture. She holds a Master’s in Museum & Exhibition Studies from the University of Illinois at Chicago. She has worked as the Curatorial Fellow for Hyde Park Art Center, at 6018North, and in commercial galleries in both Chicago and New Orleans. Her research and curation investigate the intersections of contemporary exhibition practices, pedagogy, and social justice. 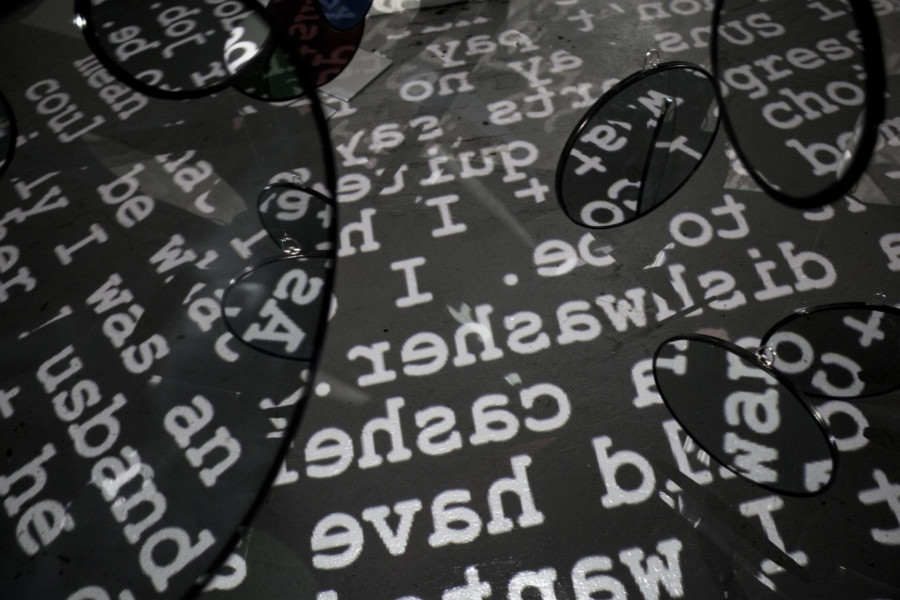