After a small break, Bit X Bit returns to help you through this stressful winter season!

Multimedia Artist Ivy Hollivana has always been motivated, developing herself as a singer at the age of 12. The D.I.Y mentality of Ivy’s pop rings true with audiences, most recently with her successful album “Kissings” and her consistent Patreon fanbase. When she isn’t doing album production, remixes, or vocal features on the tracks of other self-starting grassroots musicians, she’s creating art assets for collaborators and clients alike. Ivy Hollivana has made advertising materials for musicians like bbymutha and published an art zine with illustrator cheveux_de_lin .

DEFENSE MECHANISM found himself enthralled with music and technology from an early age. Growing up in the 90’s, he learned to love the early video game sounds of the day, especially from the original brick Game Boy. After learning about chipmusic in the late 2000’s, he started paying closer attention to the scene, and all it took was receiving an EMS cartridge with LSDj to jumpstart the obsession. With intricate music that can only be called “kickass melodic Game Boy insanity”, DEFENSE MECHANISM is here to help you push beyond what you thought was possible to create – and make you dance your ass off!

PLUS:
Delicious Vegan food from our friends at Yuck Kitchen!

DADS Chicago as well as Bit X Bit is an all inclusive space and will not tolerate any type of bigotry or intolerance. If anyone makes you uncomfortable, please let us know and we will deal with the problematic person or party. 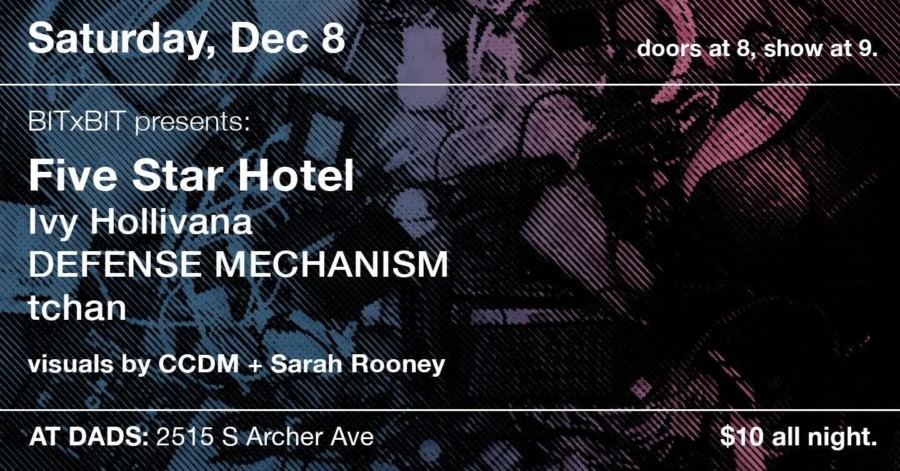