Volledig: Emptied of Shame: Full of Life represents the stories of the artists in this project – what they experienced living through the AIDS Crisis, how they survived it, and how they are living in a world that still stigmatizes HIV and doesn’t provide equal care to everyone who is affected by HIV/AIDS. It is also our recollections of the people we have known who suffered through, lived through, and died in the AIDS Crisis. This work does not try to represent every narrative within the Crisis. In fact, there are many accounts that have been lost and will never be heard. There are many voices that even now are marginalized and ignored, especially those of people of color.

Welcher explains: “With the assembled artists, I lead us through a journey of re-exploration and re-discovery of histories, memories, buried emotions, and even old wounds. In our process, we bore witness to each other and mined our collective experience for material with which we created this performance that hopefully, will allow the audience to go on the journey with us from those dark, exposed, vulnerable places to the light of the lives we lead today – emptied of shame and full of life. We refuse to be silent, to let what has transpired be unspoken and forgotten. We shall not let the world sit comfortably and look away from the tragedy that we have endured and that continues to unfold around us. Some members of this project are HIV-negative; some are HIV-positive; some have received an AIDS diagnosis. All project members have been altered by the AIDS Crisis; all have seen friends suffer; all have seen friends die.”

Paul Hamilton has created a diverse career as a pianist, recording artist, composer, music director, voice and acting coach and filmmaker. He has amassed over 30 years experience in recitals, opera and musical theatre. He now cultivates a 2nd career in video/film production. Paul was recently featured at the Edison Talks at Chicago’s Harris Theatre, performing his original piano composition, as part of the Chicago Ideas Week. He also performed his original work at Links Hall in Chicago with Volledig, a dance and music work with Butoh and improvisational influences. Other collaborations include Chicago baritone, Robert Sims, at Carnegie Hall and Lincoln Center, NYC; Charles Strouse, Odetta, Simon Estes, George Shirley, Jubilant Sykes, Jennet Ingle, Phil McKinley, Elizabeth Vrenios, Goodman Theatre, Drury Lane Theatre, Ravinia Festival Orchestra, John Concepcion and Opera Lyrica. His films have been included in the Chicago Music & Movies Festival and Macon Film Festival, and featured on the UK’s “Sky Channel” and “LandscapeHD.” He is currently documenting national parks and bringing attention to their survival and health in the 21st century, and creating new work for LandscapeHD. Paul seeks to create a bond between artist and witness. This bond holds the potential for healing, understanding and transformation.

Jeff Hancock just completed an MFA from Hollins University in choreography, with an emphasis on somatics and queer theory. He performs, teaches, choreographs and designs movement, and clothing that moves all over the US and abroad. He examines the potential mutual influence of the performance of movement and clothing. Since 1990, throughout his years dancing for River North, Hubbard Street, Same Planet Different World and many others, his dance and design life collided, supported and informed each other. Humans, movement, and curiosity about the semiotics of clothing has fueled his long history of aesthetic exploration ranging from the ridiculous to the sublime, minimalism to excess. Recent performance: Of Whales, Time and Your Last Attempt to Reach Me with Molly Shanahan/MadShak at the Dance Center of Columbia College; recent choreography: Love With/out Trembling, And We Shall Be Rid of Them – a collaboration with Molly Shanahan/MadShak, ellipsis and smear NU Danceworks, The Great Gatsby – NU Louis Theatre, Impolite Society at The Kennedy Center. Recent design projects: Khecari The Retreat, Wini Haun – trashed, Page Cunningham – On the Verge, 25th Anniversary Dance For Life Finale-Choreographer Randy Duncan, Jump Rhythm Jazz Project- Jimmie Blues, Walkabout Theater, the cure, Curmudgeon Productions-Fantasmagorie, Lucky Plush- Super Strip, Parsons Dance Co.-Train. He was nominated for a Northwestern University McCormick Distinguished Lecturer Award, Ruth Page Awards for his dancing and choreography, and is an Illinois Arts Council grant recipient.

Joseph Hutto began dancing at 13 and has had a varied commercial and contemporary career in dance for over 22 yrs now. He has a BFA in dance from University of Georgia and an MFA from the University of Illinois at Urbana-Champaign. He has worked in professional contemporary dance companies, trained in aerial arts with coaches from Cirque Du Soliel, taught jazz hip-hop contemporary and aerial at many colleges, studios, and conservatories, and gigged it commercially throughout his career appearing in music videos, commercial ads, television shows, performance events, award shows live, etc. As an out and proud member of the LGBTQ, Poz, and Kink communities (among others) he is ecstatic about being able to collaborate with other artists he truly respects in a work of this nature and incredibly honored to be a part of Volledig.

Cat Mahari creates work with personal and collective transformational possibilities. She is a free style hip hop and house dancer, also trained in modern, ballet, West African, Cuban Son, Chen taiji, the bop, and most recently krump, whose work is grounded in the upliftment of the African Diaspora and peoples all over the world. She is the director of 31st&Brklyn, a platform for performance art and community engagement. In 2017, Ms. Mahari became a Charlotte Street Foundation Generative Performance Artist Fellow, won Jit vs House pt II in Detroit, and in 2018 choreographed, composed the music, designed the projected media and installation for the solo mixtape series Violent/Break: Vol II as an artist in residence at High Concept Labs in Chicago.

Merrick M. Mitchell (Chicago, Il) is a veteran member of the Joel Hall Dancers. His professional dance career began with the Julian Swain Inner City Dance Theatre and Joseph Holmes Dance Theatre (under the direction of Joseph Holmes and Randy Duncan). He holds a B.S. in Biological Sciences from Illinois State University and a M.A. in Leadership from Concordia University. Merrick has taught Graham based Modern at the Boitsov School of Classical Ballet and continues to teach at the Joel Hall Dance Center. He is a very active member of his church. Merrick is blessed and thankful to be able to continue to share his craft.

Ted Sollinger is classically trained as a Fine Artist and is also trained as a Graphic Artist. He attended Memphis College of Art, disciplines: figure painting/drawing, printmaking and graphic design. His education also includes sociology and art history. Ted currently maintains a working studio, Otter Art Studio, which is located in the Lincoln Square neighborhood in Chicago, IL. Ted has exhibited in Chicago, IL and Memphis, TN. His work has been recently featured in group shows in both cities and most recently in a solo show at the Center on Halsted and at the Glenwood Ave Arts Fest in Chicago, IL. Ted’s artist statement: “Creating visual works that explore the archetype of ‘the stranger in us all’ though the exploration of concepts, ideals and myths surrounding masculinity and through experiment of contradictions and tensions created between rough and smooth, right and wrong, hard and soft, matte and gloss, positive and negative, push and pull. Imagery is deliberately manipulated through addition and subtraction by the artist and rendered upon surfaces that are not always traditional. Through experimentation and playing within the spaces between contradictions and the hypocrisy of everyday life the viewer is invited to embrace and celebrate the beauty of these imperfections.”

Rob Welcher is a Chicago-based contact improviser, performer, and teacher. He is a 2018 Chicago Dancemakers Forum Lab Artist and a 2018 Chicago DCASE (Dept. of Cultural Affairs and Special Events) individual artist grant recipient. He earned his masters degree in kinesiology at the University of Michigan. He is part of the team that facilitates the Chicago contact jam and pre-jam class. He is a frequent guest CI teacher at DePaul University and Columbia College in Chicago. Teaching roles outside Chicago include Ontario Regional Contact Jam (2018, Toronto), NDEO’s Men in Dance Conference (2017, UWV), Contact Meets Contemporary Festival (2016, Germany). Recent performances include the initial work-in-progress performance of Volledig, and work with Kristina Fluty, Jason Torres-Hancock, Michael Schumacher, Katie Eberhardy, and Sarah Gottlieb. 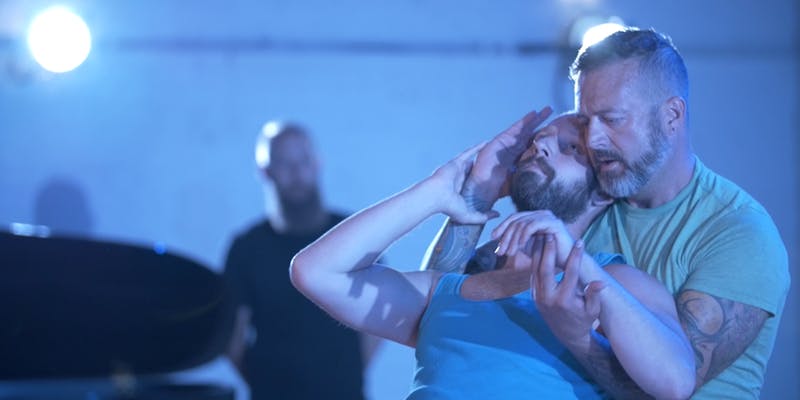