This is What We Know

We cannot escape our origins,
however hard we might try,
those origins contain the key
–could we but find it–
to all that we later become.

Chicago Artists Coalition is pleased to present This is What We Know, a HATCH Projects exhibition featuring works of art by William Camargo, Andrea Coleman, India Martin, Mitsu Salmon, and Darryl DeAngelo Terrell.

As people of color and ethnic minorities in the Americas, we often go through life seeing images of ourselves that have been selected by the majority to represent who we are and what we are capable of doing. This often leads to a sense of loss and disconnection to one’s origins. However, when the power is taken back into the hands of Black and Brown folx, the mundane becomes extraordinary and cultures and families are truly celebrated. This is What We Know surveys the contemporary tracking and archiving of communities of color. The histories of Black, Brown, and Indigenous people in the Americas has often been misrepresented, fetishized, or erased. As it would often happen, these communities took it upon themselves to explore and celebrate their past. Before there was a name for it, grassroots historians and DIY archivist were thriving and doing work vital work within their communities.

This is What We Know looks into the families and communities of artists of color to document their realities. The artists are in themselves historians and archivists of their respective people. Beyond the cataloguing of old family photos and recording of stories, these works interpret childhood memories, passages of time, family lineages, and so much more. Through the documentation of their environments, these artists are continuing an often radical tradition of reclaiming their origins and creating their own narratives.

This is What We Know is curated by Jamillah Hinson.

FREE AND OPEN TO THE PUBLIC

ARTIST BIOS
William Camargo is a Chicanx/Latinx visual artist/educator and organizer raised in Anaheim, CA and now residing in Chicago, IL. His work is inspired from his family’s immigration from Mexico and his working class upbringing in a Mexican/American barrio, touching issues of assimilation, identity, gentrification and immigration through photography. In his most recent work, he uses his rasquache aesthetics to bring awareness to issues of gentrification as a social justice issue that has plagued many communities of color across Chicago and the United States.

William Camargo is currently an arts educator in various southwest side neighborhoods in Chicago, teaching photography and arts as cultural expression and preservation.His work has been published in Business Insider, TIME, The Guardian, The New York Times and others, his photographs have also been displayed at the Chicago Cultural Center (Chicago), Loisaida Center (NY), Mathis Gallery (Wisconsin), DNJ Gallery (Santa Monica), among others.
–
Andrea​ ​Coleman​​ ​is​ ​an​ ​artist​ ​based​ ​in​ ​Chicago​ ​who​ ​utilizes​ ​the​ ​various​ ​media ​of​ ​oils,​ ​acrylics paints,​ ​magazine​ ​clippings​ ​and​ ​digital​ ​prints.​ ​Inspired​ ​by​ ​her​ ​suburban​ ​upbringing,​ ​animation,​ ​and various​ ​mural​ ​artists,​ ​her​ ​work​ ​currently​ ​investigates​ ​the​ ​interconnectedness​ ​of​ ​aura​ ​and narrative.​ ​Coleman graduated​ ​with​ ​her​ ​BFA​ ​at​ ​Columbia​ ​College​ ​Chicago. She​ ​is​ ​currently​ ​the​ ​Idea Award​ ​recipient​ ​of​ ​the​ ​Art​ ​and​ ​Art​ ​Activism​ ​organization​ ​and​ ​​Hollis​ ​Sigler​ ​Manifest​ ​Award.
–
India Martin is a visual artist whose photography creates an offering to communities by capturing the often over looked beauty of the urban landscape and the people who traverse it. Narratives about access are seen in her work with a double exposure effect, illustrating layers and complexity. She is inspired by visuals when they aren’t overly prescriptive and when they are open to contradiction and interpretation.
–
Mitsu Salmon creates performance and visual works that fuse multiple disciplines. She was born in Los Angeles to a Japanese mother and American father. Creating in differing media—translating one medium to another—is connected to the translation of differing cultures and languages. Her work draws from familial and personal narratives and then abstracts, expands, and contradicts them. Her current project investigates botany, familial histories, colonization, and archives.

Salmon received her MFA from the School of the Art Institute of Chicago in 2014, and her undergrad degree from NYU. She has presented work at places such as the Chicago Cultural Center, Julius Caesar, Comfort Station and internationally at HAU Hebbel am Ufer in Berlin, Made Budhiana Gallery in Bali and Urbanguild in Kyoto, Japan. She was awarded artist residencies at Tsung Yeh in Taiwan, Villa Pandan Harum in Bali, High Concept Lab, Links Hall, the Chicago Cultural Center, and Ox-Bow.
–
Darryl Terrell (b.1991) is a queer African-American artist whose primary practice is photography. Currently based between Detroit, MI, and Chicago IL, Terrell is a MFA graduate of the School of the Art Institute of Chicago, where he received his MFA in Photography. Terrell’s work deals with personal narratives, body image, black masculinity, queer identity, and the black family structure alone with other aspects of American Blackness. Pulling from influences he observed growing up on the Eastside of Detroit, Michigan, Terrell’s work is also a reflection of popular culture traversed though media such as music, movies, and other similarly related sources.
–
CURATOR BIO
Jamillah Hinson is a curator, grassroots archivist, and painter working in Chicago. She currently works with the Chicago-based collective Beauty Breaks, creating experimental participatory workshops centering on the Black femme experience. In the past, she has interned at the Bemis Center for Contemporary Art working with both the curatorial and community arts director. 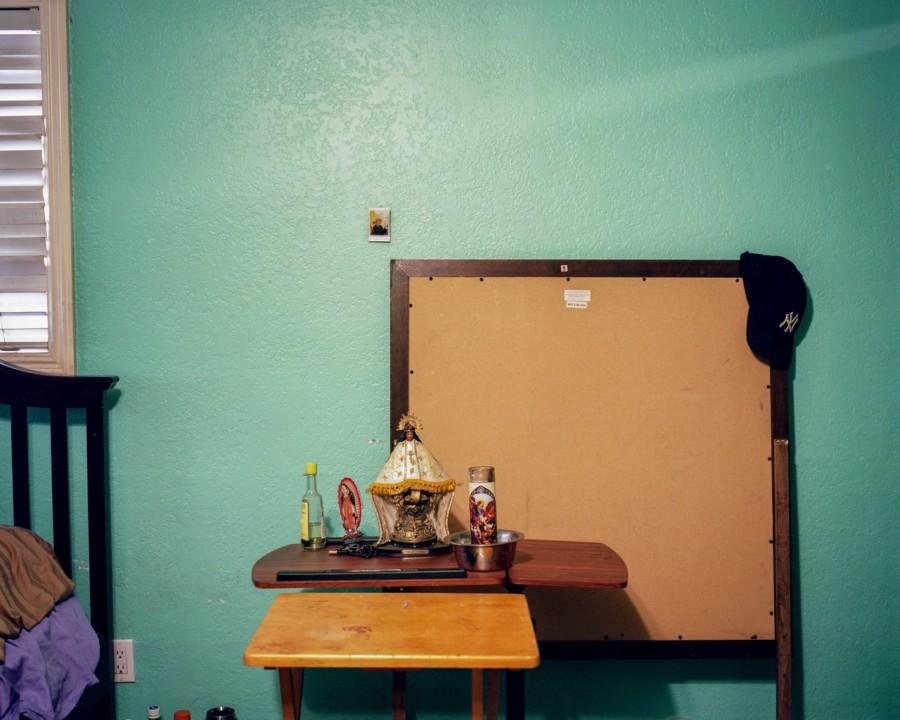