On view through Sunday, January 6th

The Jackson Junge Gallery presents SOUNDS OF MUSIC, its fifth and final group exhibition of the 2018 season. The exhibition features 32 works of art in various mediums by Chicago-based artists. The opening will be hosted on Friday, November 2, 2018, with an artist’s reception from 6-10pm. Admission is FREE to the public.

Music and Fine Art are often associated with one another and have inspired generations of artists. Life is a little less fulfilling without these disciplines to guide and stimulate the soul. The human perception of music is subjective, some interpreting sound through color or symbolism. Throughout history, artists have played with this idea to develop ways of evoking feeling and emotion from visual experience. SOUNDS OF MUSIC exhibits works of art that depict the degrees of relationship between fine art and music and the ways in which they influence the viewer.

Each of the 24 artists in, SOUNDS OF MUSIC portray their connection to music in special ways. One of the featured artists, Laura Lee Junge allows the music to influence her entire body of work. “Music has always been a driving force behind the mood when I am painting. I intend to capture the rhythm, intense to soft—whatever I am feeling,” says Junge. Junge’s process is methodical and controlled. However, when she is listening to music, she allows the rhythms to inspire spontaneity in her color and form choices. The artist states that she “can design the entire piece, but it is often more in the moment that the music takes control and inspiration hits.” “The Conduct-Dress,” Junge’s most recent painting, represents her lifetime love for music. In this piece the female figure is transforming into a vortex of instruments and color. Junge has blurred the lines as to where the conductor ends and the music begins, referencing Kandinski’s philosophy of color’s paralleled musical tonality. The music moves through her dress up into her shoulder, where butterflies take flight. She elaborates that the butterflies signify a metamorphosis in her artistic development. Junge’s work has always been saturated with symbolism intended to invoke feeling in the viewer. “The Conduct-Dress” is peppered with motifs of humming birds, butterflies and orchids, each with their own significance. In her youth, Junge’s father was diagnosed with an illness. At his sickest, humming birds would feed from his hands. She has always seen this as affirmation of her father’s unique connection to this world and continues to be inspired by his overwhelming love for music. When asked about the significance of all these symbols, Junge said there was one common factor, “Humming birds and butterflies have this way of dancing through the air. They help create that magical sense that the music inspires. As for the orchid, I have always envisioned the petals dancing down the stem. They too have a sense of movement.” For Junge, music and art have always gone together and go hand-in-hand, creating a story that people can share and experience collectively, yet interpret personally. “I love that people assign their own story to it.”

Paula Loomis depicts the meeting of music and visual art as a collision of cosmic forces in her acrylic painting, “Soul of the Universe.” Loomis states that the “piece represents the power of these mediums throughout time as they have shaped the human soul, connection, and experience.” Eoin Cullen’s sculpture, “The Spider” is a nostalgic reference to the popular usage of the 33 and 45 rpm records. With more efficient recording practices and the cheaper production cost of vinyl records, music became more affordable and more accessible to the masses. Thus creating an opportunity for the development of what would become popular or “pop” music. According to Cullen, the piece “is a reflection of generations and varying associations we have between object and sound.”

SOUNDS OF MUSIC, has multiple pieces that reference musicians who played during the early development of the record industry—Buddy Holly, Louis Armstrong, Freddy Hubbard and John Lennon are just a few artists cited and depicted in this exhibition. In Darrin Patton’s piece “Gunslinga,” he refers to blues artists and how “‘the blues’ is synonymous with Chicago music, and when the blues came to Chicago it became electrified; no one personified this more that the Blues Guitarist or the GUNSLINGA.”

“Close your eyes and listen. Do you hear the colors? Red. Green. Yellow. Swinging. Dancing. Playing in swirls. A million colors emerging from the music,” postulates photographer Frank Styburski. This exhibition is a visual representation of artist’s who see the music. They see it in a way that is unknown to others. 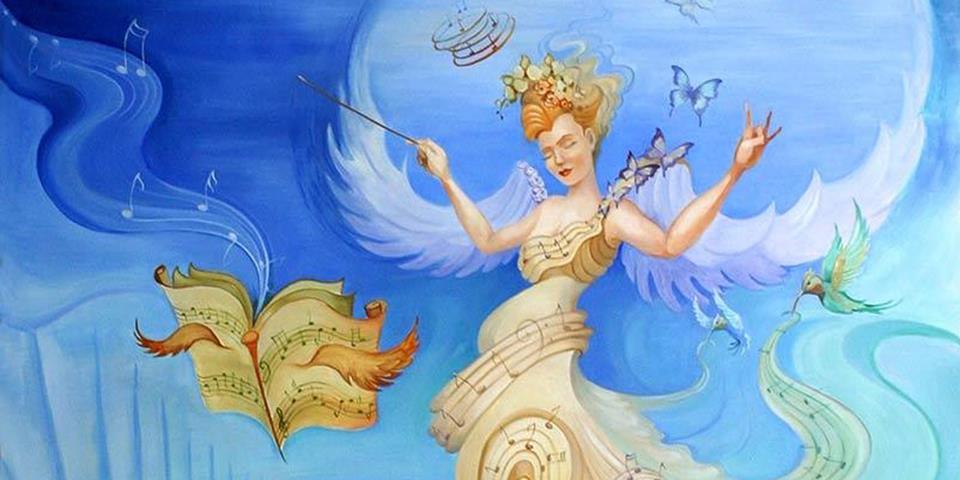