Ebony G. Patterson: …for those who bear/bare witness…

On view through Saturday, December 22nd

moniquemeloche is thrilled to present …for those who bear/bare witness…, Ebony G. Patterson’s fourth solo show at the gallery. Patterson’s multilayered practice – in sculpture, installation, performance, and video – uses beauty as a tool. She employs opulent, hand-embellished surfaces and brightly colored patterns to seduce the viewer into bearing witness to the violence and social injustices imposed upon the invisible and the voiceless.

To this end, Patterson’s new body of large-scale tapestries and hand-cut paper works reflects her recent investigation of gardens:

“For almost five years, I have been exploring the idea of gardens, both real and imagined, and their relationship to postcolonial spaces. I am interested in how gardens – natural but cultivated settings – operate with social demarcations. I investigate their relationship to beauty, dress, class, race, the body, land, and death. These new works create an immersive installation – a nocturnal garden that acknowledges bodies and sites, that uses pageantry and beauty to create presence in ‘gardens’ gone awry. We come to pause, to bear witness, and to acknowledge…”

These new works – exquisitely and ornately embellished with myriad materials such as glitter, stickers, and varied textiles, among other things – is an unmistakable call to action and testimonial. The titular wordplay – …for those who bear/bare witness… – implicates not only the viewer, who must acknowledge the content of Patterson’s presentation, but also the anonymous victims memorialized by the works, whose bodies are disappeared, or laid bare.

Indeed, Patterson has been slowly taking apart her figures, calling attention to their invisibility on the larger world’s stage precisely by disappearing them in her own works. The new works depict a jumbled jungle of lush flora and fauna, through whose coiled vines and fertile floral sprays ghostly corporeal forms are just barely visible. A closer look and limbless, headless torsos, cloaked in jewel-toned finery, become apparent. Confidently posed, they flaunt a melancholy greatness. Elsewhere, unattached limbs mingle with the verdant density, and animals such as owls, bears, or roosters keep watch. Presented on a newly artist-designed fabric wallpaper, which depicts an uneasily peaceful image of a garden at night, these works put forth an environment of uncanny, ominous beauty and decay. These are gardens where life and death co-mingle, where bodies are buried, historical traumas are revealed, and souls are set free. 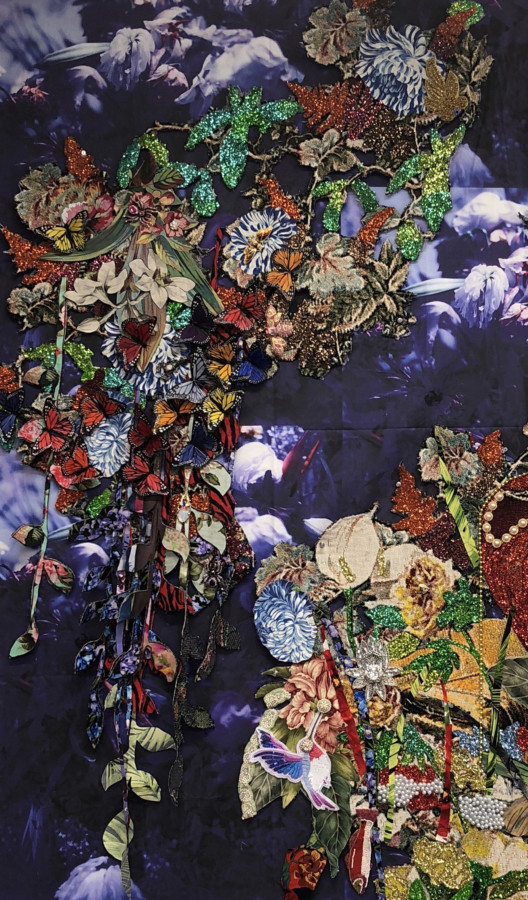