On view through Friday, December 21st

table is pleased to announce its inaugural solo project 1 + 1 = 3, the tenuous arithmetic of kinship, an exhibition of new
work by Los Angeles based artist Carmen Amengual. This is the artist’s first show in Chicago. 1 + 1 = 3, the tenuous arithmetic of kinship, is an installation composed of objects and two-channel slide/video projections. Amengual experiments with oblique modes of representation and storytelling, presenting objects with sound, video and poetry, generating layered constellations of meaning.

The installation confronts issues of loss and absence, considering the traces left behind by those who came before us.

Investigating precarious archives and retracing ways of seeing and inhabiting space, Amengual turns the exhibition into a medium that connects present and past, proposing expanded notions of temporality. This is a space for becoming and for disposing one’s self, in anticipation of what may be to come, where mortality is imbricated with interdependence, irreplaceability, and fragility. Projection and re-projection of someone else’s visions focus an investigation into notions of otherness, togetherness and inheritance. Amengual’s conceptual poetics conjures this “other’s” presence, bringing it back across temporalities and locations to the space of the living, while reframing the present that the living occupy.

Carmen Amengual grew up in Buenos Aires, Argentina and has lived in Los Angeles since 2012. She holds a B.A. in Comparative Literature from the University of Buenos Aires and an M.F.A from the California Institute of the Arts. In 2016, she attended the CalArts REEF Residency where she co-founded the Laboratory for Latin American Art & Thinking (LATlab), an educational and curatorial platform for Latinx and Latin American artists in Los Angeles. Recently, she was an assistant curator of “The Words of Others: León Ferrari and Rhetoric in Times of War,” organized by Ruth Estévez at the Roy and Edna Disney CalArts Theatre (REDCAT), and has been a visiting instructor at the California Institute of the Arts. Carmen’s artwork has been exhibited at Human Resources, E.D. Freeman Gallery, Dread Lounge (Los Angeles), CalArts (Valencia, California), EFC and Museo Quinta Trabucco (Buenos Aires).

table is a temporary artist-run project space organized by Kyle Bellucci Johanson. Over the course of one year, table will host artists for solo shows and long-form discursive meals with invited cultural workers. table is an experiment, working between so-called discrete categories of subject and object, public and private, individual and collective, to situate practices and facilitate critical discourse, building community outside of either institution or market. 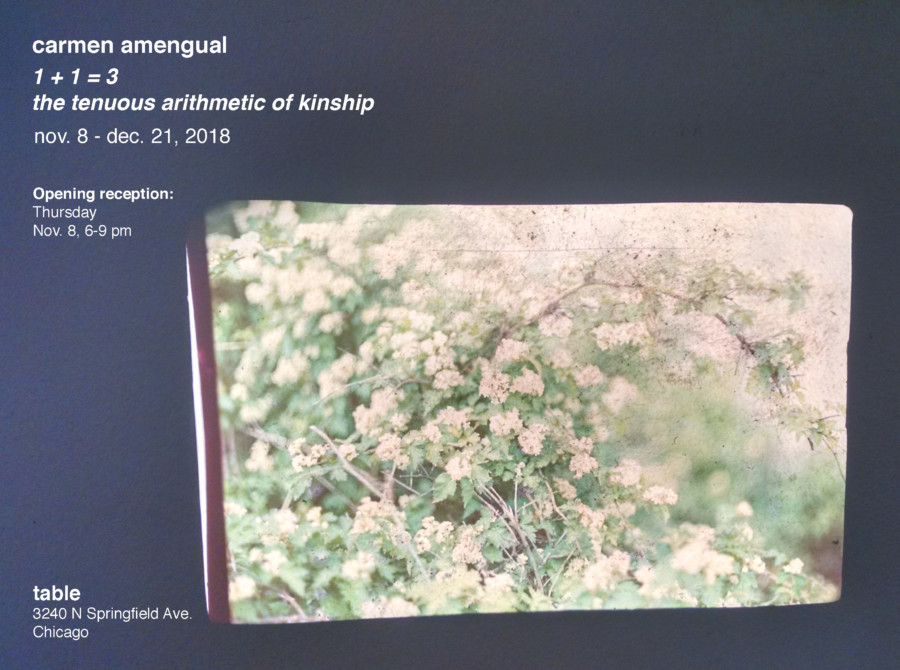