Volker Saul: Before You Know

Devening Projects is very pleased to present Before You Know, Volker Saul’s third exhibition with the gallery. The Cologne-based artist will feature a selection of his most recent “paper cuts” developed out of a process that includes painting, cutting, layering and assembly. Throughout each step of production, there is a nimble use of instinct and feeling to arrive at just the right compositional and chromatic position. The opening takes place on Sunday, October 21st and will continue until December 8th.

The designs for the paper-cuts come about as freehand drawings on standard DIN A4 pages. Using a Fine-Liner pen, Volker Saul draw lines that come together as form, with no preliminary draft, planning or correction. Ideas for forms developed during the process may act as an individual element or as a sequence of several on the page. A selection of these configurations is transferred by projection to larger pages and then carefully cut out. For further treatment, he uses both what has been cut out and the surface from which the cut has been made.

The paper-cuts constitute the raw material for the subsequent painterly processes for which he leaves sufficient room for chance. He works on the front and reverse sides with color; often, both sides are used. In addition to the cuts, he paints uncut papers; later, these serve as backgrounds for finished drawings. No matter of how the material is generated, each piece enters the pool for potential use in a final paper work. Strata are built up in layers of two to five sheets; each layer becomes a picture element of equal value–regardless of what or how much of it will be visible in the finished work. The material has come about independently of one another—there is no hierarchy. The assignments may be changed during each phase of work.

Thus, decisions take place throughout the entire time the series is developed, in a long process of trial, error, and assessment. As it evolves, the series forms a body of individual parts that may be flexibly combined. In a final step, he affixes the layers to one another; at this point the open working-process has been completed. As a result, each finished work is precisely whatever it is, but everything could also be very different.

(born 1955) Since the mid-80s, Volker Saul has been primarily concerned with drawing and its translation into other media and disciplines. He has produced wall works and ground-based objects and has presented those as discrete works and in grouped, wall-scale installations. He has made site-specific wall paintings and works which operate in the intermediate range between image and object. He has had gallery exhibitions in Nagoya at Gallery HAM in Paris; at Galerie Gutharc-Ballin in Auckland: at City Art Rooms. His works were exhibited at the Rheinisches Landesmuseum Bonn; the Japan Cultural Institute in Cologne; the Leopold Hoesch Museum Düren; the Dortmunder Kunstverein; and the Kunstverein Mönchengladbach. In the U.S. he was included in group exhibitions at the Pratt Institute in NY; the Zolla Lieberman Gallery in Chicago and the Cleve Carney Gallery at the College of DuPage in Glen Ellen, Illinois. He has received the Günther and Carola Peill scholarship, the Kunstpreis des Kreises Düren, and the Euregio Art Award from Kleve. Volker Saul lives and works in Cologne. 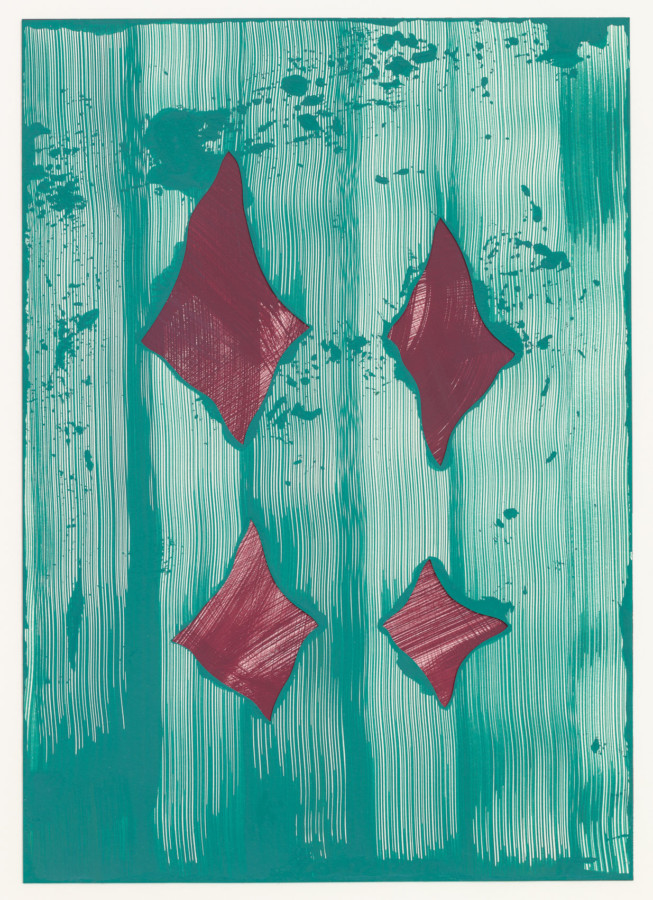