@ School of the Art Institute of Chicago, The LeRoy Neiman Center

This symposium coincides with the exhibition, Recipes for Madeleines, at SAIC’s SITE Gallery. The exhibition brings together artists of various disciplines whose works critically engage the relationship between nostalgia and media. Although nostalgia as a psychological, social and political phenomenon has existed for centuries, the current emergence of nostalgic aesthetics starts to constitute nostalgia as a contemporary condition, a side-effect of technological advancement and political uneasiness.

“Reminiscing/Reinventing” serves as an occasion to open up a discussion around our contemporary experiences of remembering, the aesthetics of which is heavily mediated by the technological apparatus that record and manifest the past. Russian-American critic, media artist and novelist Svetlana Boym sees nostalgia as a kind of “defense mechanism in a time of accelerated rhythms of life and historical upheavals,” a process of working through and coping with the irreconcilable ideal and reality. We hope to use the opportunity of this symposium to reflect upon the role of media not only as platforms for re-imagining the past, but also as ways of working through history for the present.

Bryan LeBeuf, Simulacrum I: Home Movies
Alexandre Saden & Hande Lara Sever, The hope, the end: Sabbatai Zevi and nostalgia for the Apocalypse
Ana Stojanović, Embodied Memory and Mass Performances in the Context of the Former Yugoslavia(s) and the Republic of Serbia
11:30 – 13:00: Print-Media

Speaker Bios:
About our Keynote Speaker:

Katharina Niemeyer is professor of media theory at the media school (École des médias) Faculty of communication, University of Québec in Montréal. Her research focuses on media and technologies and their relations to memory, history and nostalgia. She is currently working on nostalgic online communities, a project financed by the FRQSC. She also works on (international) media events and mediatization (current project: CRSH); their ‘liveness’ and commemorations or artistic extensions and transformations. In 2015, Niemeyer co-founded the International Media and Nostalgia Network after having edited the volume Media and Nostalgia. Yearning for the past, present and future in 2014 (Palgrave Macmillan).

About our Graduate Speakers:

Megan Fariello is a PhD candidate in the Cultural Studies program at George Mason University. Her dissertation is currently titled The Techno-Historical Acoustic: Television, Podcasting, and Audio “Spectatorship” and examines the recent flood of sound-focused narratives in contemporary media and their effect on audience engagement and subjectivity. Her research interests include cinema and media studies, theories of nostalgia, and sound culture studies.

Morgan Green is a writer and artist who works to disrupt stasis in the way people read words and bodies. At present, she is scrutinizing the work that the digital does on the body, as well as the work that flesh does on machines. Ultimately, this means working beyond the place where machines and people begin to merge and into the genealogy of cyborgs. Her professional background as a coder informs and shapes this arena of her practice. She exploits computers for their ability to proliferate text and images rapidly. She uses code to recontextualize the component parts of signifiers, and in this way to spread apart the pieces of the constellated machines that restrict the body and the self. She is disassembling the web of cybernetic forces that accrete to structure time-space and thereby formulate body-minds.

Morgan is a 2018-19 New Media Artist in Residence at Mana Contemporary Chicago, and also part of the fall 2018 Mana Miami Exchange Residency. She holds an MFA from the School of the Art Institute of Chicago, and a BFA from USC’s School of Cinematic Arts. She has published writing in publications including Art21 Magazine, and shown and performed work at film festivals, galleries, and performance venues across the United States — notably DOC NYC Film Festival and the Neutra VDL Research House. She was born in Madison, Wisconsin and resides in Chicago.

Bryan A. LeBeuf is a visual artist and programmer. LeBeuf is an MFA candidate at The School of the Art Institute (2019), and received a BFA from Wayne State University (2012). His recent work examines community through collective memory, using overlapping memories as a tool to rebuild, and reimagine his homes in Detroit, MI. The landscapes and design draw inspiration from the defined environments of early Japanese role-playing games and dating simulators, weaving together the imagery of post-industrialized neighborhoods, as well as memories of his life in Detroit. The images represent contemporary existential challenges entangled in social engagement through the lens of emerging technology. One landscape exemplifies a failed promise of industry to a community and the other an aspirational, sterilized environment in which a program strives to fulfill our social concerns. These themes can be most clearly seen in his upcoming installation work, Simulacrum I: Home Movies. There, the participant takes the perspective of a player, entering a morphing urban landscape, and discovering a collective unconscious via digital excavation.

Susan Mackey is a Master’s candidate in Art History, Theory, and Criticism at the School of the Art Institute of Chicago. Her current work focuses on the intersection of gender and race in contemporary visual culture. While attending SAIC, Susan has written on the political potential of stripper aesthetics, the influence of 19th-century Parisian courtesans on European fashion, the overwhelming nature of Mickalene Thomas’s portraits, and queer failure in the work of South African performance artist Athi-Patra Ruga. Prior to SAIC, Susan was the Assistant to the Director of the High Museum of Art, in Atlanta, Georgia. Her writing has appeared in the Atlanta arts publication BURNAWAY. She received a B.A. in art history and women’s studies from Appalachian State University in Boone, North Carolina.

Alexandre Saden is an artist and writer whose work interrogates histories of beliefs, ideas and images. Taking the form of video, textual and sculptural installations, the work consistently involves a tension between discourses and their results, between sublime experiences and the structures that underpins them. His work is rooted in exploring the structures of visual language, and what they betray about the ideologies that underpins them. He received his BFA from Central Saint Martins in London, UK, and his MFA from California Institute of the Arts in Los Angeles, CA

Hande Lara Sever is an artist working across media and genres –video, sculpture, performance, and photography. Artistic research constitutes the core of Sever’s practice and her works explore wide-ranging themes, including issues of exile, post-colonial identity, censorship, and cultural difference. Raised in Istanbul, Turkey she received her BA from Emory University in Atlanta, GA and MFA from California Institute of the Arts in Valencia, CA.

Julia Sharpe is an artist and scholar. Her work is invested in issues surrounding the structures of daily, domestic life, and historical consciousness, especially in the American South. Her moving image work explores the relationship between seeing and feeling that emerges in saturated and distilled visual, sonic environments. What affect surfaces from an environment alive with history, or dominated by a refrain of accumulating history? How does human awareness evolve within or react to that refrain? Through a practice of making and scholarship, Sharpe brings together visual anthropology and contemporary slow cinema studies to explore how we visualize these questions. Sharpe received her MFA from the School of the Art Institute of Chicago (2018) and her BA from the University of Virginia (2012). Sharpe lives and works in Richmond, Virginia and Chicago, Illinois.

Jennifer Smart is a freelance arts writer and critic and a second-year Masters student in the Department of Art History at Southern Methodist University. Prior to entering the program at SMU Jennifer worked in the nonprofit and media worlds while writing regularly on art, theatre, music, and literature for various arts and general interest publications. Her research focuses on modern and contemporary art broadly with especial interest in digital and new media studies,memory and nostalgia, and intermedia/multimedia work.

Ana Stojanović follows Ph.D. studies in Culture and Performance at the Department of World Arts and Cultures/Dance of the University of California Los Angeles, USA. Throughout her academic and professional engagement, Ana had the opportunity to explore various artistic disciplines, both in a capacity of a researcher and a practitioner. After her bachelor studies at the Acting Department of the Academy of Arts in Belgrade, she was a recipient of IACS Indonesian Art and Culture Scholarship 2013., supported by Ministry of foreign affairs of Indonesia, for studies in the field of Asian Theatre; traditional Indonesian dance; Wayang kulit – traditional Shadow Theatre. In 2016., she acquired her Master’s degree in Dance Anthropology and Ethnochoreology with the Master Thesis “The embodied recollection of the past: Social aspects of dancing and singing in the context of Nostalgia for the former Socialist Federative Republic of Yugoslavia”. Ana Stojanović is an actress, Serbian and Indonesian traditional dancer and a dance researcher, she continually strives to develop a unique understanding of what it means to be a socially conscious artist.

Thanks to our sponsors!
Student Committee: Stephanie Dvareckas, Sophie Jenkins, Nicky Ni, Jacob Zhang
This symposium would not be possible without the generous sponsorship by SITE Galleries, SAIC Student Government, Department of Visual Critical Studies, La Fournette Bakery. All design credit due to Yan Zhou. Special thank to Bess Williamson for the continued help and support. 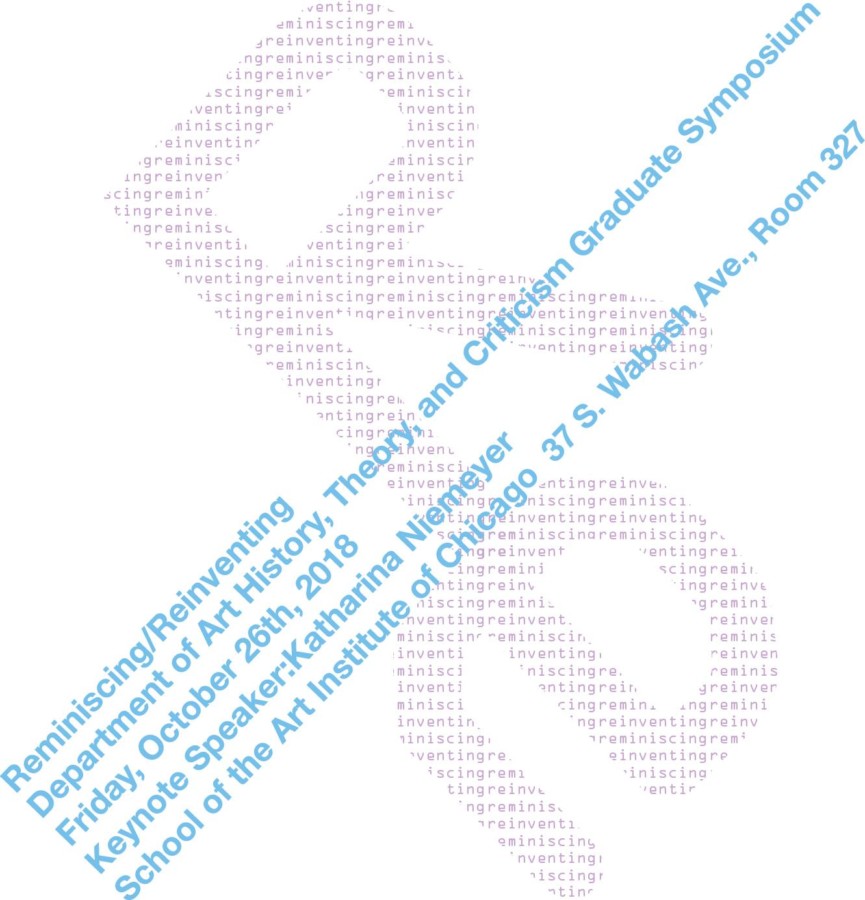