Liudmila Kondakova: The Magic of Paris

On view through Thursday, November 15th

Included in the show is “Street Art, Lisbon Alfama,” an exciting new acrylic on canvas. Where a sizeable surrealist eye dominates the center-left of the painting, and we see a young couple taking a selfie in front of another wall in the distance. The art feels more muralistic in this scene and deliberately beautifying in regard to the environment as it combines with the overflowing flowers and blue skies in the background. Kondakova has always put her positive spin on Paris, imbibing it with a sense of magic and these works continue the tradition. MLG is delighted to now be able to exhibit this new work to our many other Kondakova collectors.

“We all know the feeling of experiencing a dream so real and vivid that when we wake, we lived it. I feel this way about my art”. -Liudmila Kondakova

In her last few paintings, Kondakova has touched on the themes of music and street art, and in both, she has focused on the solitude of the creative artist. In Concert on the Roof, a lone violinist serenades the Paris evening from her window (seen in the lower right corner by her signature), igniting a congregation of musical angels on the rooftops in the painting’s foreground. The Palais Garnier dominates the center of the painting, setting the stage for this celestial concert. In Midnight Music, she places a much quieter scene, down to earth in a sense, as we look into the street-level windows of the piano bar where a lone pianist and listener share a moment of musical camaraderie. The snow falls lightly, and a warm glow emanates from the second-floor apartment. This is a quiet and warm painting in the tradition of her best Paris street scenes.

Liudmila Kondakova grew up in Russia, studied at the Grabar Center in Moscow and attended Russia’s School of Sacred Arts and the Moscow Art Institute, before immigrating to the United States in 1991. Her artistic gifts talent and idealized vision of Paris has served as the foundation and inspiration of much of her magnificent work. The palette and icons throughout her paintings are influenced by both Russian and Byzantine sensibilities. Kondakova often finds herself chasing after a particular hour of the day in her paintings; she searches for the perfect hour to reveal all the magic of the color.

Kondakova will be greeting collectors and sharing new works, in person, at The Woodfield Mall in Schaumburg, IL – on Saturday, October 27th, 2018 from 6-8pm 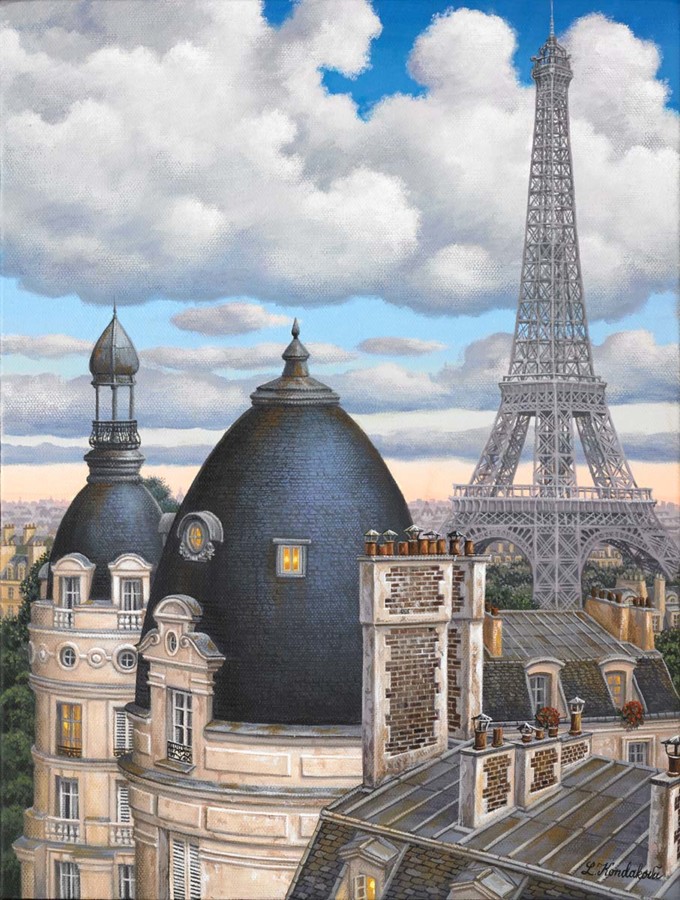