As part of the Terra Foundation’s 2018 Art Design Chicago initiative, UChicago Arts’ Public Art Program presents Dialogo: Virginio Ferrari and Chicago, a series of public events with internationally-recognized Italian sculptor Virginio Ferrari (b. 1937), whose practice has been deeply embedded in Chicago’s art world since he made this city his home in the mid-1960s. Following the launch of Ferrari’s new monograph, Virginio Ferrari: Full Circle 1957-2017, at Humanities Day (October 21, 2017), Dialogo: Virginio Ferrari and Chicago will expand on that conversation with public tours and talks, K-12 programming, and opportunities to experience some of Ferrari’s lesser known or privately-held works.

Virginio Ferrari’s connection to Chicago’s rich history of art and design is represented in more than thirty works around the city, with many more sculptures in Illinois, the U.S., and around the globe. These myriad works link his practice both to the national art world in cities like Philadelphia and Los Angeles, as well as to the international art world in cities like Belgium, Ecuador, China, and his native Italy. His practice is representative of the work of his contemporaries within and around buildings in the 20th century, and can serve as a gateway to a broader understanding of the history of public art in relation to architecturally-defined spaces.

Art Design Chicago is a spirited celebration of the unique and vital role Chicago plays as America’s crossroads of art and design, creativity and commerce. With a scope and ambition befitting Chicago’s grit and can-do determination, Art Design Chicago shares with the world a dynamic convergence of more than 25 exhibitions and hundreds of public programs in 2018. Together, they tell the stories of the artists and designers that defined and continue to propel Chicago’s role as a hub of imagination and impact.

Virginio Ferrari’s artistic ideals, which focus on interaction between his pieces and the public individual, very much align with the collaborative environment of the University of Chicago and its Laboratory Schools, which value the life of the mind and emphasize collaboration and open dialogue between students and faculty alike. It would only make sense, then, that the University campus is home to many of his public works. One such piece, called Interlocking, was gifted to the University of Chicago’s Laboratory Schools by Don and Marlene Mazzoni and Charles and Mary Chuman to commemorate the completion of the then–new Middle School building. Completed in 1993, the piece was sited in the courtyard that created a pathway connecting the gym building to the main high school building at the Lab Schools, and vice versa.

Interlocking is meant to be an interactive bench, sectioned off into three curved parts of different sizes that are pieced together to form a circular structure with breaks in between. Made of stainless steel, and sitting 28 inches high and 15 inches across, the bench sat in one of the busiest sections of the Lab School campus, and became a place for students to sit, talk, and even play an invented game called “Circle Soccer”, which used the spacing of the piece as goalposts. This type of intense art–viewer interaction was and is very atypical from the way that most other pieces on campus interact with the public around them. Interlocking became more than just a sculpture in this way. Being able to not only go up and touch, but also sit on, climb on and play with and around the sculpture made it much more integral to the Lab School campus and community.

This exhibition surveys Ferrari’s models and drawings, revealing his experimental processes for producing large-scale public art. The relationship between two-dimensional works on paper and three-dimensional small-scale models clarifies his continued fascination with the translation of forms and the manipulation of space, and provides a fresh context for experiencing his public art around Chicago’s South Side. 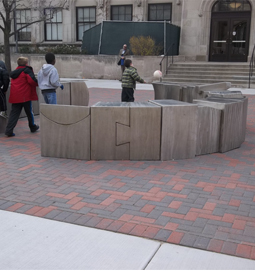