On view through Thursday, October 25th

The Chicago Artists Coalition is pleased to present “The Master’s Tools Will Never Dismantle the Master’s Monuments,” a solo exhibition by BOLT Artist-in-Residence, Emilio Rojas.

“Those of us who have been forged in the crucibles of difference — know that survival is not an academic skill…For the master’s tools will never dismantle the master’s house. They may allow us temporarily to beat him at his own game, but they will never enable us to bring about genuine change.”

In 1890, a Spanish architect by the name of Alberto de Palacio submitted a proposal for a monument to commemorate Christopher Columbus for the 1893 Columbian Exposition in Chicago. The application, which won the competition, was meant to surpass the Eiffel Tower, which is today the most visited paid monument in the world. If built, this 1312-foot-tall copy of the earth would have been the tallest man-made structure for 73 years. Although unrealized the monument remains the most ambitious and monumental celebration of colonization.

The physical shadow of a monument changes everyday with the course of the sun, but its historical shadow is only altered with the passage of time. In The Wretched of the Earth (1961), Frantz Fanon wrote “Europe has taken over leadership of the world with fervor, cynicism, and violence. And look how the shadow of its monuments spreads and multiplies.”

A monument will always be an echo from the past, warning the present and if we listen we can construct a different future. An unbuilt monument casts no shadow, no matter how colossal the plans, no matter how high they would have reached. Some monuments are falling, some were never erected. Some became iconic, named after their creators, beacons of light, touristic destinations, souvenir key chains, others became forgotten. Some monuments are made for the illustrious others for the unnamed and the fallen. Every unrealized architecture leaves behind dreams, models and designs for their construction.

“The Master’s Tools Will Never Dismantle the Master’s Monuments” is an exhibition about speculative fiction: a failed monument, a forgotten architect, an immigrant that popularized bodybuilding, and a Titan condemned to hold the weight of the sky in his shoulders. This exhibition proposes an alternative history that would have altered Chicago’s cultural and political landscape in unimaginable ways using performance and the remaking of a monument.

This exhibition couldn’t have been possible without the moral and financial support and guidance of:

ARTIST BIO
Emilio Rojas is a multidisciplinary artist working primarily with the body in performance, using video, photography, installation, public interventions, writing, and sculpture. He holds an MFA in Performance from SAIC and a BFA in Film from Emily Carr University in Vancouver, Canada. Rojas identifies as a NAFTA baby, (born in Mexico City, spent his formative artistic years in Canada, and currently based in Chicago). As a queer latinx immigrant with indigenous heritage it is essential to his practice to engage in the postcolonial ethical imperative to uncover, investigate, and make visible and audible undervalued or disparaged sites of knowledge, narratives, and individuals. He utilizes his body in a political and critical way, as an instrument to unearth removed traumas, embodied forms of decolonization, migration and poetics of space. His research based practice is heavily influenced by queer and feminist archives, border politics, botanical colonialism, and defaced monuments. His works have been exhibited in the US, Mexico, Canada, Japan, Austria, England, Greece, France, Germany, Italy, Spain, and Australia. Besides his artistic practice, Emilio is also a translator, community activist, yoga teacher, and anti-oppression facilitator with queer, migrant and refugee youth. Galeria Jose de la Fuente in Santander, Spain and Gallleriapiú in Bologna, Italy represents Rojas’ work. 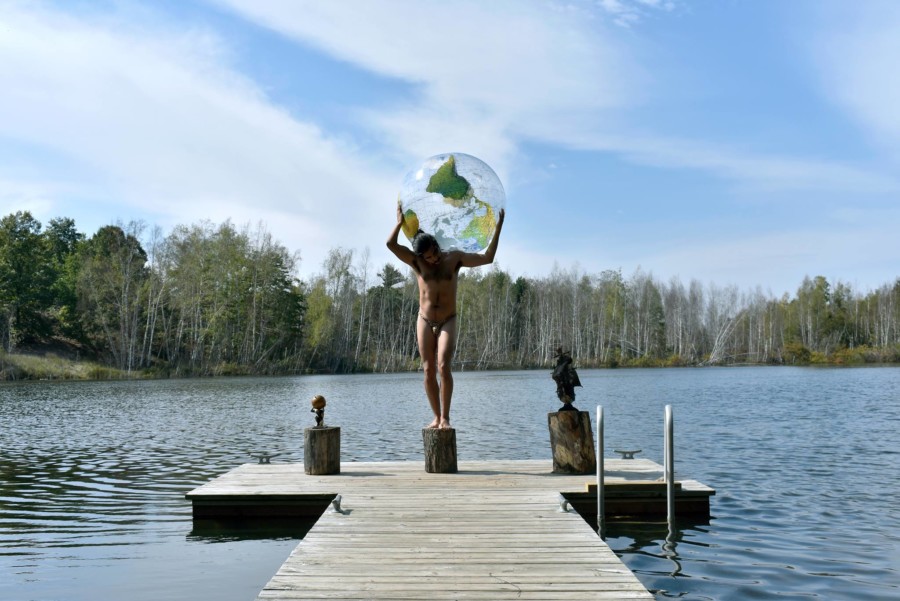