On view through Saturday, November 17th

“Lavender Vanitas” is Bredar’s first solo show, and is comprised of works that are in dialogue with notions of existential identity, personal history, lineage, American politics, and the readymade as it applies to both art and culture. Regardless of medium, Bredar’s work is invested in presenting a personal iconographic language through his selection of imagery and modes of depiction; the vessel or apparatus through which he chooses to execute his ideas (painting, ceramics, etc.) is less significant than the seemingly shrouded concepts. A suite of four small paintings rendered in muted, almost blurred brush strokes initially seem to be depicting disparate or elusive narratives, but in fact they are closely entangled in a networked system. As sculptor and Harvard professor Nora Schultz asserted, “The variety of media and works is thus not a sign for a search for Danny’s true medium, but it is the very base of his methodology that is a most contemporary one, where the reflection and understanding of art theories and media-inherent critique are combined with his understanding of his own individual perspective and identity within this present time.” Indeed, Bredar’s work is both sourced from ideas around his own identity, which is rooted in personal history, and also often rife with art historical references, particularly harking back to 17th century Baroque painters such as Diego Velázquez, as well as the work of the Dutch masters operating at the same time.

The Dutch influence on Bredar’s work is reflected in the intricacies of the 44 Delft- inspired tiles he created for “Lavender Vanitas.” Each tile is numbered and depicts a singular image that demonstrates his proclivity for illustration and portraiture. Akin to his paintings, the tiles harbor secret messages or surprises within each motif. For example, the tile depicting Justin Turner of the Los Angeles Dodgers signifies the mugging the artist endured in Chicago last year, by way of the Dodgers-Cubs game that he watched in the Emergency Room. Each tile houses a message or code that is at once very personal while remaining relatable to the viewer due to the pervasiveness of some of his image choices (deep dish pizza, a ripped pair of jeans, a shattered plate, etc.).

A preoccupation with Dutch history as well as ideas of nationalism and nationalistic tendencies are embedded in Mutant III, the painting of the three-legged carrot. During the Dutch Golden Age, the government had a monopoly over carrot distribution – orange carrots were produced with more regularity instead of purple and white carrots due to the national and regal association with William, Prince of Orange, who spearheaded the struggle for Dutch independence. Still today orange remains an important color in the Netherlands; one needs only to look to the color of the Netherlands’ foremost soccer team’s jerseys. This anecdote is indicative of the rest of Bredar’s practice; what is represented is never quite what it seems.

Bredar’s interest in the contemporary crisis of truth as it relates to American politics can be detected in several of the works in “Lavender Vanitas.” The pristinely rendered portrait of a fox, titled Liar, alludes to the now ubiquitous twin concepts of alternative facts and fake news. Detailed renditions of political figures painted on three empty Epson ink cartridges portray the faces of CIA psychologist James Mitchell, journalist Jamal Khashoggi, and Russian agent Anatoliy Chepiga. These seemingly demure and innocuous painted cartridges force the viewer to conjure a memory from history they may not want to, but it is imperative to remember history in a moment where there are those who wish to rewrite it. The scale of these pieces is also worth noting, because, as Bredar states, “Significant world events become small, silent pictures on our smartphones, which encourages the public’s complacency, which develops into a tacit approval of violence.”

In this post-truth moment, Bredar’s work in “Lavender Vanitas” serves as a form of subtle resistance – the kind of daily resistance each of us are able to perform if so desired – against the varying forms of xenophobia, nationalism, and jingoism that pervade daily life.

Danny Bredar (b. 1992 Denver, Colorado) is a Chicago-based interdisciplinary artist. He is slated to receive his Master of Fine Arts in Painting and Drawing from the School of the Art Institute of Chicago (2019). Bredar graduated from Harvard University with a Bachelor of Arts in Visual and Environmental Studies. He recently completed a one-month residency at the Vermont Studio Center. 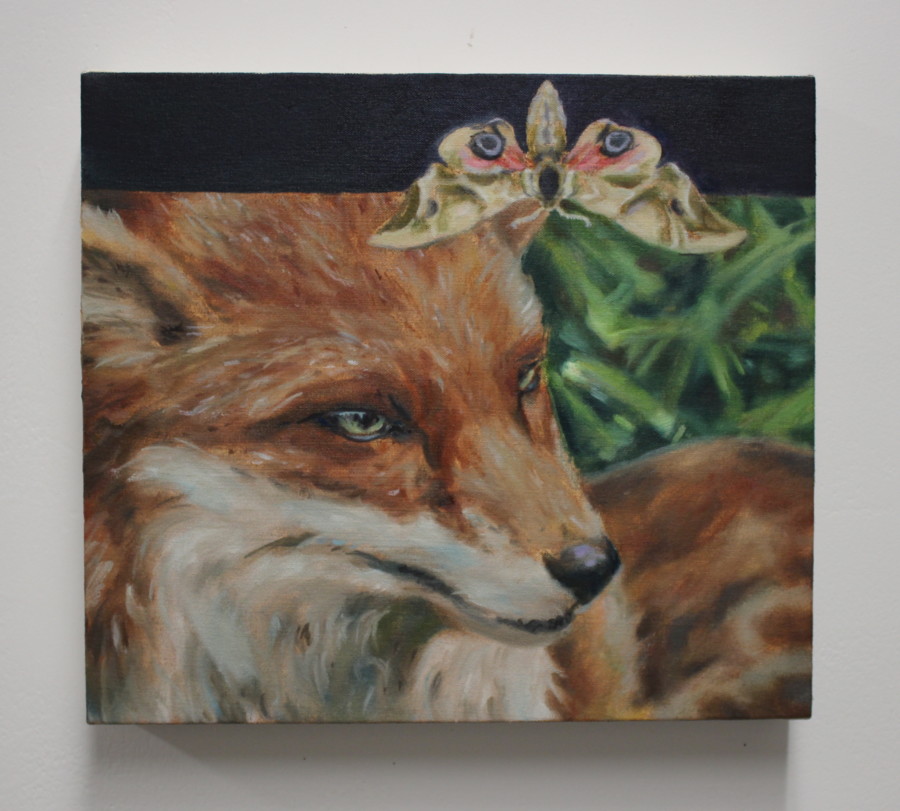