Inaugural Show is ‘Ando and Le Corbusier: Masters of Architecture’

Wrightwood 659, a new venue for exhibitions on architecture and on socially engaged art, opens in Chicago on October 12, 2018. Designed by Pritzker Prize-winning architect Tadao Ando, the new gallery occupies a 1920s building in Chicago’s Lincoln Park neighborhood, which Ando has transformed, into a place for contemplative experiences of art and architecture.

The inaugural exhibition, Ando and Le Corbusier: Masters of Architecture occupies all three floors of exhibition space at Wrightwood 659. It includes more than 100 Le Corbusier drawings, photographs, and models — on loan from institutions including the Fondation Le Corbusier, Paris, and the Art Institute of Chicago — as well as 106 small models of Le Corbusier’s architectural works made by students of Ando, among other objects. Curator of the Corbusier section of the exhibition is Eric Mumford, Rebecca and John Voyles Professor of Architecture, Washington University in St. Louis. The Ando material is curated by Dan Whittaker, who is completing his PhD in architectural history at the Illinois Institute of Technology, and who is working with the Ando studio on the installation of that portion of the exhibition.

Ando and Le Corbusier is organized in five sections: The expansive second-floor gallery, devoted to Le Corbusier, will contain his Purist works of the 1920s, including paintings and furniture; his expressive, exposed concrete work of the postwar years; and a series of maquettes of Corbusier buildings created by students of Ando. Highlights here will include original models of key Corbusier projects, such as the Villa Savoye (1929), a modernist private house outside of Paris; the urban plan for the reconstruction of the small French city of Saint Dié (1945), intended to transform the war-damaged town into something of a modernist utopia; the Unité d’Habitation, a housing project in Marseille (1945); the chapel at Ronchamp (1950); and the Assembly at Chandigarh (1954), represented by a very large model of the entire capitol complex. Several Le Corbusier paintings and lithographs will also be included, along with documentary materials, archival photographs, and an original chaise longue designed by Le Corbusier and Charlotte Perriand (1929), from the collection of the Art Institute of Chicago.

The third and fourth floors will be devoted to Ando’s work, with the third-floor focusing on the architect’s work on the island of Naoshima and its Benesse Art Site. This will be represented with models of several art hotel structures, museum buildings, and a funicular that scales the side of the extensively re-forested island. The fourth level will contain a presentation of Ando’s three major American museums, with models of the Pulitzer Arts Foundation, created by IIT students working under Whittaker’s oversight; of the Modern Art Museum of Fort Worth, built by students at University of Illinois Chicago; and of the Clark Art Institute, in Williamstown, Massachusetts, constructed by students at School of the Art Institute of Chicago. The three models will be accompanied by hand-drawn sketches by Ando, demonstrating the creative, generative design process he embarks upon when designing spaces to house fine art. In addition to the material in the exhibition galleries, a large concrete scale-model of Ando’s iconic Church of the Light in Ibaraki, Osaka, Japan, will be shown on the building’s mezzanine level, positioned beneath the building’s skylights.

Ando Lecture
On October 11, 2018, Tadao Ando will speak about his work at the Art Institute of Chicago’s annual Butler-Vanderlinden Lecture on Architecture, co-presented this year with Alphawood Foundation Chicago. The lecture will take place at 6:30 p.m. in the Art Institute’s Rubloff Auditorium, at 230 South Columbus Drive.
ww.artic.edu/event/artist-talk-tadao-ando

Admission is by online reservation only and available at www.wrightwood659.org.

The inaugural exhibition includes more than 100 Le Corbusier drawings, photographs, and models — on loan from institutions including the Fondation Le Corbusier, Paris, and the Art Institute of Chicago — as well as 106 small models of Le Corbusier’s architectural works made by students of Ando.

The co-curators for Ando and Le Corbusier: Masters of Architecture are Eric Mumford, Rebecca and John Voyles Professor of Architecture, Washington University in St. Louis, and Dan Whittaker, who is completing his PhD in architectural history at the Illinois Institute of Technology. The exhibition is presented by Alphawood Exhibitions, a subsidiary of Alphawood Foundation Chicago.

Wrightwood 659 is a private, non-commercial entity, envisioned as an integral part of the cultural and civic fabric of Chicago. It will present two public exhibitions annually, in the spring and fall, comprising socially engaged art and architecture. Wrightwood 659 does not have a collection, and it is not intended to be a collecting organization.

ADMISSION
By online reservation only. Walk-ins cannot be accommodated. To be alerted when tickets are available, the public may sign up for the mailing list at www.wrightwood659.org.

ABOUT
Wrightwood 659 was founded by Fred Eychaner and Dan Whittaker. Eychaner is a longtime LGBTQ activist, political donor, philanthropist, and president of Alphawood Foundation Chicago. Whittaker served as owner’s representative for construction of Wrightwood 659, and as liaison with Tadao Ando Architects.

Alphawood is a grant-making foundation committed primarily to advocacy, architecture and preservation, arts and arts education, promotion and protection of the rights of LGBT citizens and people living with HIV/AIDS, and other human and civil rights. The Foundation was lead donor to Louis Kahn’s Four Freedoms Park on Roosevelt Island, in New York City, and spearheaded the renovation of Frank Lloyd Wright’s Unity Temple in Oak Park, Illinois.

Programming for Wrightwood 659 grew out of the exhibition program of Alphawood Exhibitions, a subsidiary of the Foundation, which presented Art AIDS America (2016–17) and Then They Came for Me: Incarceration of Japanese Americans during WWII and the Demise of Civil Liberties” (2017), both held in the former Alphawood Gallery. Wrightwood 659 continues the Alphawood Exhibitions program as a separate non-commercial entity. 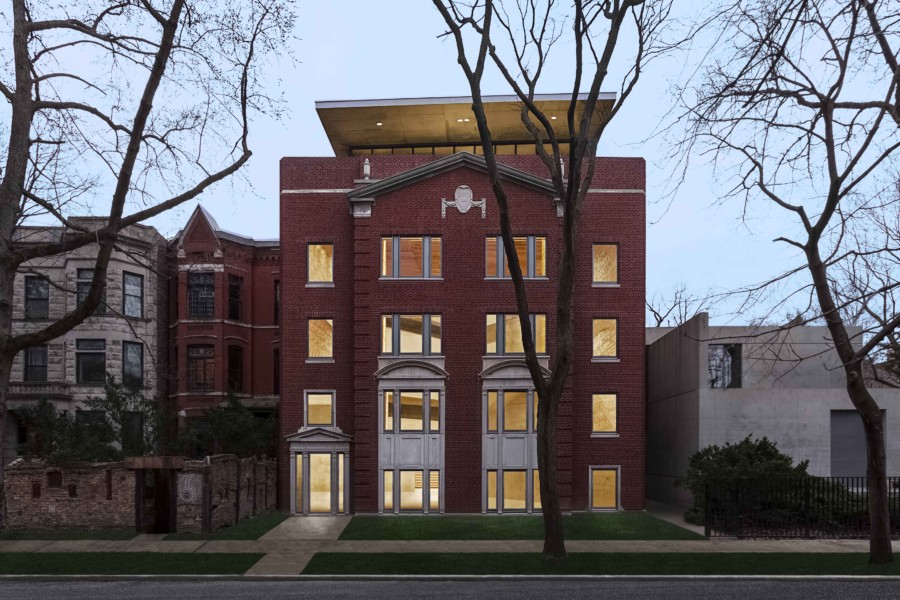