ON THE ROAD AGAIN

On view through Sunday, October 28th

The Jackson Junge Gallery presents ON THE ROAD AGAIN, its fourth mixed-media group exhibition of 2018. The special group exhibit features the artwork of both Chicago-based and nation-wide artists. The opening will be hosted on Friday, September 14, 2018, with an artist’s reception from 6-10pm. Admission is FREE to the public.

Iconic American road-stops have been the subject of music, film and literature. For this exhibition, the gallery aims to challenge the viewer to reflect on their own memories, and to encompass the feeling of being on the open road, surrounded by this country’s beautiful landscape and history. Each artist adds to the feeling of nostalgia and national identity through various mediums and inspires the viewer to reflect on their own past. In the series Vanishing America, photographer Allan Teger has entombed these iconic scenes by developing and coloring them in a process that is no longer accessible. Starting in 1980, Teger’s subjects of this body of work are, diners, food stands and other various roadside buildings that are themselves a thing of the past. Each photo was shot with black and white film, then hand developed in his darkroom. He then individually painted the photos with Marshal’s Photo Oils, the same oil paints that were used for over a hundred years for this process. Each photo tosses the viewer back into the past and allows one to reflect on their own stories, or stories past down to them. Tom Duffy’s piece, “Ghost Town, Indiana” reflects on the lost towns in this nation, “Being on the backroads of the rural Midwest, provides a lesson in the history of the effects of migration from rural to cities and of the school consolidation process, both of which leave so many small downs nearly deserted.”

Nostalgia has challenged each one of these artists to reflect on their past, whether it be an influential memory or a simple reminiscence to times past. Karen Hanrahan, funded by donations, art sales and whatever belongings she could sell, moved west leaving all that she had ever known. She traveled 3200 miles in 30 days and with a mixture of pure will and gumption she reached her destination. In her piece, “Sinclair Brontosaurus” the viewer can reminisce alongside Hanrahan when she says, “Along the way I wondered how many before me had been touched by this roadside ‘thing’ on the other side of my camera. How many felt a smile, or said to themselves ‘that was cool’ as they continued to drive on.” Like many other artworks in ON THE ROAD AGAIN, “Sinclair Brontosaurus” evokes a childlike playfulness and imagination as the viewer remembers road trips of the past. In “Where Men Can’t Live Gods Fare No Better,” Dominic Sanson’s mixed media painting depicts a lonely two lane road that cuts through a desolate landscape, followed by a river. Sanson says, “Before the time of iPads and iPhones, a child on a road trip found him or herself on roads like this, every summer. Seemingly endless nothing out the window and at the mercy of keeping themselves amused via their own imagination.” These days, using one’s imagination is a challenge not necessarily an instinct like it has in the past. With this exhibition, the curators have brought to light the beautiful mundaneness of being on the open road and aims to encourage travel around our diverse country.

ON THE ROAD AGAIN, sparks one’s memories of being on the open road and allows the viewer to reflect on times past. However, the goal of this exhibition is to acknowledge the past, but to inspire more travel around our great nation. This exhibition will guide us through rural and urban America, past and present, all the way to your favorite late night restaurant. 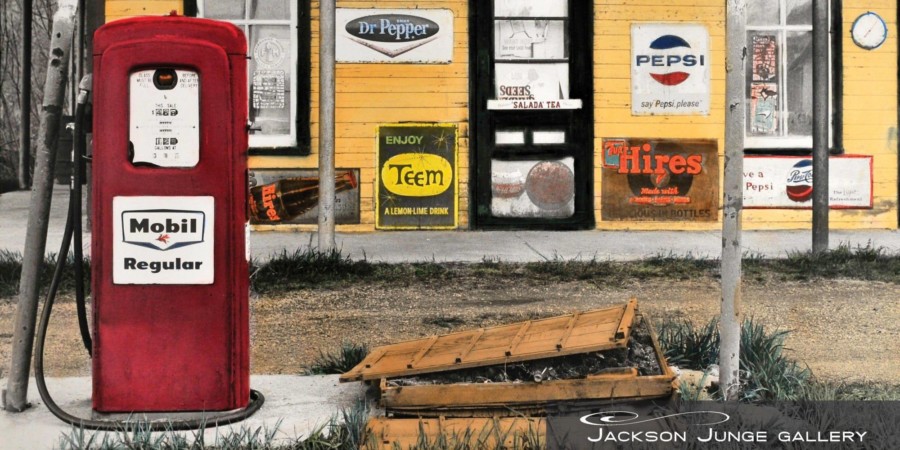