Exploring the formal nature of incarceration, containment, and suspension through the lens of architecture and language, this group exhibition, curated by Stephanie Cristello, is anchored by Iván Navarro’s (Paul Kasmin Gallery) site-specific installation, entitled Chicago Manual Style Rodeo Fence (2018). The work is comprised of a large, white neon light that has been bent to render a wrought iron fence, the latest in a series of installations the artist began in 2011. Illuminated only by the white glow of the neon, and filled with the electric buzz of the transformers, the space is complemented by two artists whose works address philosophical and institutional structures of containment and boundaries.

The first is Kay Rosen’s video work Sisyphus (1991)—displayed on a panel monitor hovering just below the ceiling, the film’s continuous loop cycles through over seventy phonetic misspellings of the mythological figure. Excluding the correct variation, the work ultimately omits its own title—the void of which becomes central to the piece, as the slideshow aesthetics transport the cyclical motion of the archetypal figure’s curse into the present.

The second is a photograph by Robert Chase Heishman from his series Indefinite Free Time (2013–ongoing), alongside artist Ansi, a former Guantánamo Bay Detainee (released after nearly fifteen years in January 2017). Recreating the site of a still life, as interpreted through the rendering of Ansi’s Still Life of Apples and a Cup Against a Striped Background (2016), Heishman’s image attempts to restage, and in the process reifies, the source imagery of the composition arranged within the confinement of GTMO. Here, both the original work on paper by Ansi, on loan from the John Jay College of Criminal Justice in New York, and its mimetic image by Heishman, are on view.

As a singular installation, the exhibition space operates through three registers of light—emanating from, through, and upon the selected work. Entitled In Light Of…, the exhibition adopts an open-ended maxim (i.e. in light of current events, in light of the recent tragedy, etc.) that alludes not only to the light that washes over a body in space, but also the limitless possibilities that language and architecture have to alter, underscore, or contain our experience.

With the support of Paul Kasmin Gallery, New York. 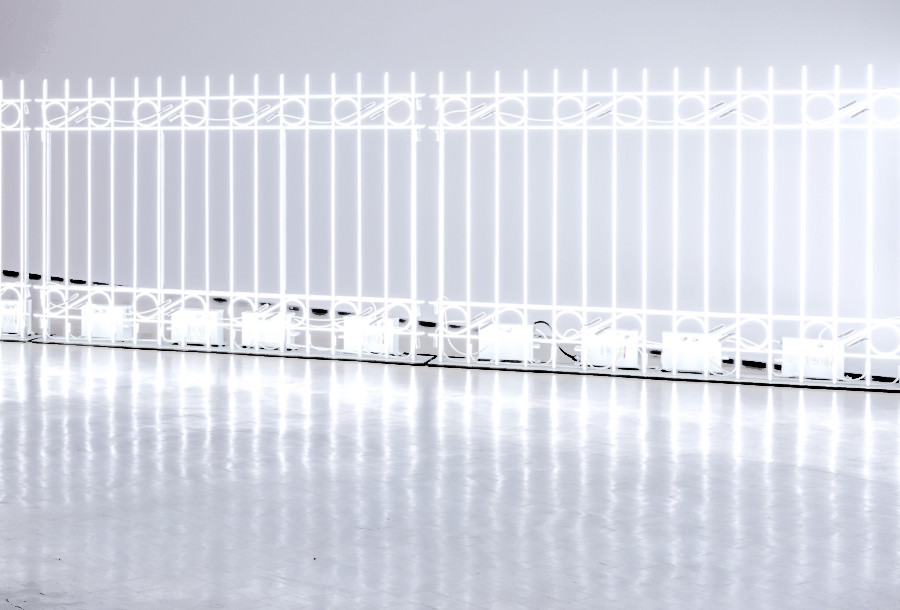