Women & Children First is honored to host the book launch celebration for Unapologetic: A Black, Queer, and Feminist Mandate for Radical Movements by Charlene Carruthers. For this event, Carruthers will be joined by Barbara Ransby and Janae Bonsu for a panel discussion.

Please note: This event will be held at the Logan Arts Center (915 E 60th St.). Attendees who purchase a book with their ticket will pick up the book at the event. All ticket holders are invited to the official book release after-party (Location: TBA)!

This 21st-century activists guide to upending mainstream ideas about race, class, and gender carves out a path to collective liberation.

Drawing on Black intellectual and grassroots organizing traditions, including the Haitian Revolution, the US civil rights movement, and LGBTQ rights and feminist movements, Unapologetic challenges all of us engaged in the social justice struggle to make the movement for Black liberation more radical, more queer, and more feminist. This book provides a vision for how social justice movements can become sharper and more effective through principled struggle, healing justice, and leadership development. It also offers a flexible model of what deeply effective organizing can be, anchored in the Chicago model of activism, which features long-term commitment, cultural sensitivity, creative strategizing, and multiple cross-group alliances. And Unapologetic provides a clear framework for activists committed to building transformative power, encouraging young people to see themselves as visionaries and leaders.

Charlene A. Carruthers is the founding national director of the Black Youth Project 100 (BYP100), she has worked alongside hundreds of young Black activists to build a national base of activist member-led organizations of Black 18-35 year olds dedicated to creating justice and freedom for all Black people. Her passion for developing young leaders to build capacity within marginalized communities has led her to work on immigrant rights, economic justice and civil rights campaigns nationwide. She has led grassroots and digital strategy campaigns for national organizations including the Center for Community Change, the Women’s Media Center, ColorOfChange.org and National People’s Action, as well as being a member of a historic delegation of young activists in Palestine in 2015 to build solidarity between Black and Palestinian liberation movements. Her work has been covered in several publications including the New York Times, Washington Post, Chicago Reader, The Nation, Ebony and Essence Magazines. She has appeared on CNN, Democracy Now!, BBC and MSNBC. Charlene has also written for theRoot.com, Colorlines and the Boston Review. Charlene is recognized as one of the top 10 most influential African Americans by The Root 100, one of Ebony Magazine’s “Woke 100”; an Emerging Power Player in Chicago Magazine and is the 2017 recipient of the YWCA’s Dr. Dorothy I. Height Award. Charlene has served as a featured speaker at various institutions including Wellesley College, Shaw University, Princeton University, Northwestern University and her alma mater Illinois Wesleyan University. Charlene also received a Master of Social Work at Washington University in St. Louis. Charlene was born and raised on the South Side of Chicago where she currently resides and continues to lead and partake in social justice movements.

All ticket sales are non-refundable. If you purchase a book with your ticket and are unable to attend the event, you will have 30 days to pick up the book at Women & Children First (5233 N. Clark St.). 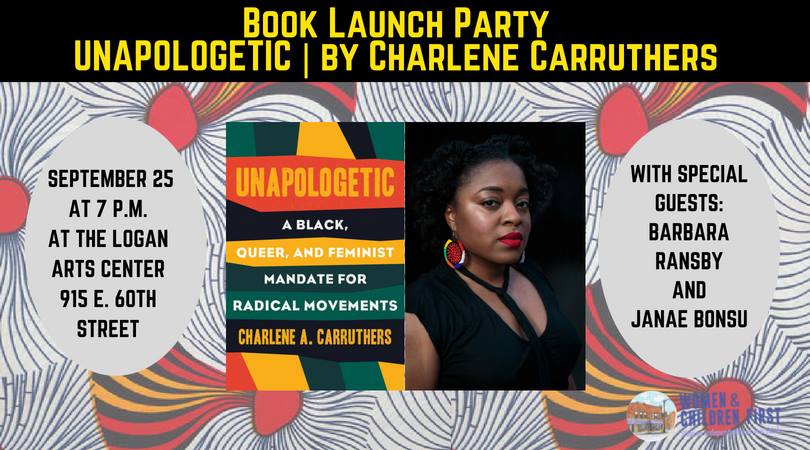