062 Gallery will be presenting Chekhov’s Gun by William Wiebe. Please join us during the open hours.

The objects and documents collected and presented in Chekhov’s Gun challenge the efficacy of predictive policing in Chicago through translation, performance, and academic enquiry. The project (and the evidence it collects) begins and ends with ShotSpotter, a gunshot detection system that uses microphones dispersed across the city to record short bursts of audio in the event of gunfire, and then geographically locate the source of the sound by comparing the distance of its point of origin from the three closest microphones. Wiebe explores the history of the development and use of this technology in other fields of statistical science to draw attention to the implicit absurdity of its application to the observation and control of human actions—specifically gun crime—and cautions against the over-reliance on audio alone as a mode of a witness.

To illustrate ShotSpotter technology, which relies on mapping space through sound, Wiebe visualizes the concept by drawing comparisons with stereoscopy. A stereoscope creates an illusion of depth through the simultaneous presentation of two views of the same image seen from slightly different angles by attending to the minor perspectival independence of the two human eyes. Similarly, the ShotSpotter system also creates the illusion of evidence by attending to perspectival distance, but through sound.

The data collected by the ShotSpotter system is also used to create the illusion of correlation and predict human behavior—not just any behavior, but the anger, frustration, or passion immediately preceding and following gunfire that some might describe as unpredictable. While analyzing how the data collected is used and stored, Chekhov’s Gun also reminds us of the constant presence of the network of ShotSpotter microphones across the city that are always listening. The exhibition examines who precisely is listening, why, how, and to what ends, and challenges the concept of a neutral listener.

Eventually, Wiebe heeds that to effect a silent listener one must accept its one-sided mode of witness and perform the role it tacitly demands: for the subject of surveillance to produce sound. A series of audio-performances with collaborators will use a parametric speaker to transform the ShotSpotter from witness to audience, disrupting the system by isolating an individual microphone that was intended to function as part of a network. Performing for a single microphone, Wiebe will hypothetically enter an error into the system, proving that the real world is anomalous and cannot be predicted.

William Wiebe (b. 1992) is an artist working in photography, video, new media, and installation. He is a recent graduate of the Master of Fine Arts in Photography program at the School of the Art Institute of Chicago. In September 2018, he will begin research as a Fulbright fellow in Cyprus. 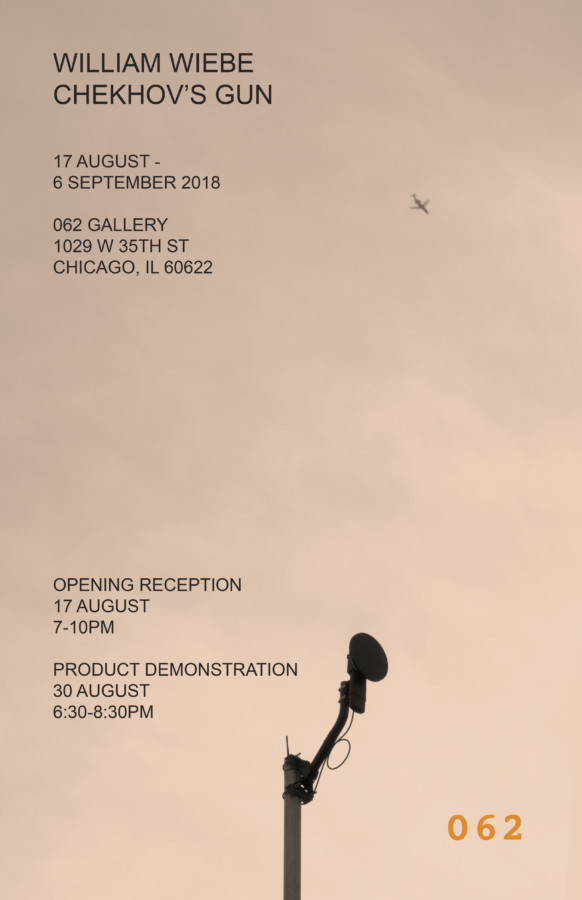