In conjunction with the “Gay is Good” exhibition, Gerber/Hart Library and Archives will be having a screening of two documentaries covering the homophile era of LGBTQ political activism.

Quearborn & Perversion: An Early History of Lesbian & Gay Chicago (2009, 109 min) is a documentary on LGBTQ life in Chicago from 1934 to 1974. Moving from the speakeasys and Henry Gerber’s founding of the Society for Human Rights in the 1930s, to the underground social structure of the 1940s and 1950s, to the dawn of consciousness-raising entities such as the Daughters of Bilitus and Mattachine Midwest in the 1960’s, and concluding with the emergence of the gay liberation movement with the first Pride March and opening of the first community center in the early 1970s.

The screening will be held at the library in the Atrium on Thursday, Aug 2, 6:30-9:30 pm. The screening is free, but due to limited seating reservations are required. The exhibit will be open for viewing before and after the screening. Go to gerberhart.org to reserve seating 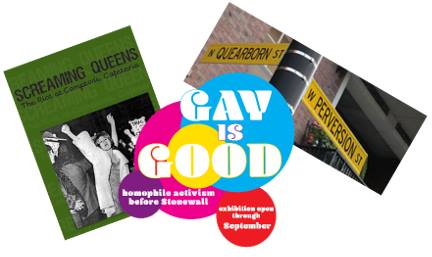