Personal Space is a group show that explores spatial relationships between public and private spaces, occupying space with bodies, and leaving those bodies behind for digital exploration.

Interdimensional Research Laboratory (IRL) by Selden Paterson and Kayla Anderson is an organization specializing in crowd-sourced data collection on parallel universes. Their state-of-the-art facility, located in the historic Wonderlands Mall, uses the rich history of consumer-culture-infrastructure as a base upon which to build our endeavor. The shopping mall in and of itself acts as a sort of labyrinth of disparate worlds, each with a separate branded identity.

Myth is depoliticized speech. One must naturally understand ‘political’ in its deeper meaning, as describing the whole of human relations in their real, social structure, in their power of making the world…Myth does not deny things, on the contrary, its function is to talk about them…”

Artist Yaloo forms ever changing landscapes with her bodies with a soon to be forgotten national workout routine.

When No One Does Anything by Aubrey Manson

Bios:
Selden Paterson is a Chicago-based futurist, contributing to the forward motion of humankind with her involvement in several lifestyle & technology projects. Selden’s longtime position as COO at the first and only all-amenities-included extraplanetary community, her work with Beta Plus Inc.’s numerous improvement initiatives, and her stewardship of the foremost self-help system for modern cyborgs have brought her to recognition among innovators locally and worldwide.

Kayla Anderson is a thing-among-things and often acts as an intermediary between objects and ideas.

Snow Yunxue Fu (b. 1987) is a Chinese-born and Chicago-based artist exploring the aesthetic concept of the sublime through a wide range of digital media. Trained formerly as a painter, Fu is known for her elaborate 3D animations that are modeled after the allegorical paintings of Caspar David Friedrich. Fu introduced computer animation to contemporary art at a time when the medium was colored by its mainstream associations with scientific modeling and commercial animation in film. Her artwork approaches the subject of the Sublime using topographical computer rendered animation and installation. She exams and interprets the world around her through digital space and virtual reality, where she draws a parallel to the realms of multi-dimensionality, the physical, the virtual, and the metaphysical. Fu has exhibited her work nationally and internationally

Yaloo is a South Korea born artist working with video installation. She received MFA from School of the Art Institute of Chicago in 2015. She was the first recipient of Lyn Blumenthal Memorial Fellowship from Video Data Bank. She received Gold Award from AHL Foundation, NY. She was a full fellowship recipient of Bemis Studio Art Center (USA), La Bande Video (Canada), Fukuoka Asian Museum (Japan). Her works have been part number of solo and group shows in the cities such as Chicago, New York, Seattle, Santa Fe, Vancouver, Quebec City, Malmö, Dresden, Fukuoka and Seoul.

Aubrey Ingmar Manson completed her MFA in 2015 from The School of the Art Institute of Chicago and her BFA in Painting at Northern Illinois University in 2010. She is an active co-director of the artist-run project space Dalton Warehouse in Los Angeles and has exhibited in and around Los Angeles, San Francisco, and Chicago.

Amanda VanValkenburg is a visual artist using a combination of traditional and digital techniques. Her work explores catharsis in disaster and uses 3D software to play in the uncanny valley. 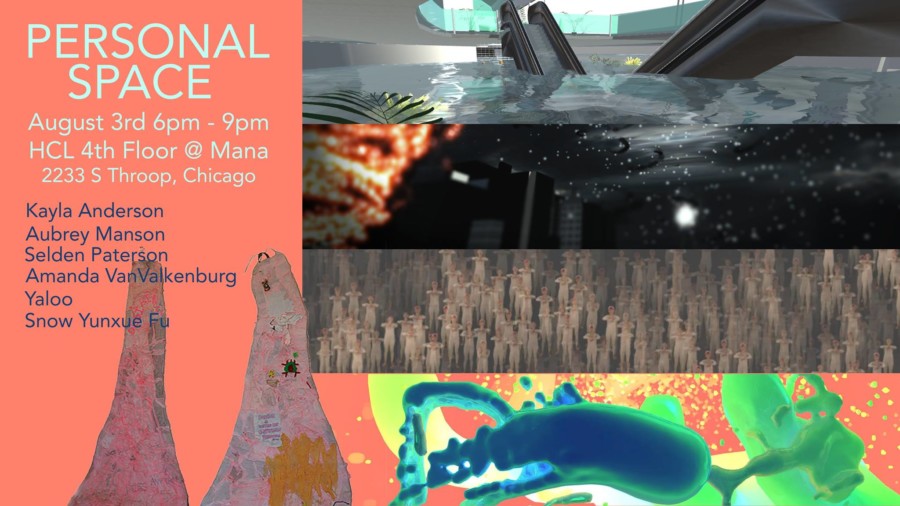