Opening the Vault Doors: The Adjutants of the Fighting 8th

On view through Sunday, May 31st

An adjutant is a military officer who assists the commanding officer with unit administration. Keeping track of records and movements of the unit, the adjutant serves as an archivist! Join Curator Hari Jones and Chief Archivist and Special Collections Librarian Skyla Hearn for a unique glimpse into our amazing archive and the materials adjudant Captain James C. Hall donated to the Museum. Discover how those materials were used to support the themes in our newest exhibition Clearing a Path for Democracy: Citizen Soldiers of the Fighting 8th of WWI

About Clearing A Path For Democracy: Citizen Soldiers of the Illinois Fighting 8th

Citizen soldiers have served their nation, their states, and their communities throughout American history. National guardsmen are the quintessential citizen soldiers, and the men of the 8th Infantry Illinois National Guard demonstrated the best qualities of this segment of American society. This Illinois regiment was unique in American history. It was deployed in two foreign wars with a complete complement of African American officers. It was designated the 370th United States Infantry during World War I, and the regiment was awarded more citations than any other American regiment that fought along Europe’s Western Front.

Curator Hari Jones stated, “The story of the 8th Infantry Illinois National Guard reveals the political sophistication of Chicago’s African American community in the late 19th and early 20th centuries. The community stood as a sterling example of what could be done despite racial discrimination.” He continued, “In a two-part exhibition, this story will be told, and this story is certain to challenge false images of Americans of African descent too often projected in the nation’s popular culture.” 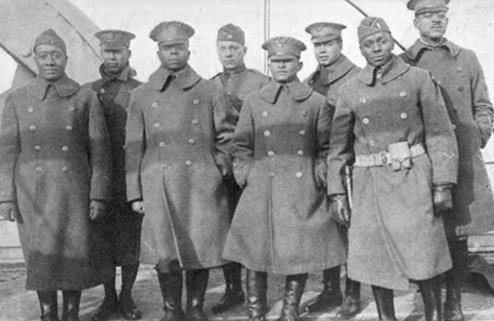