On view through Thursday, September 20th

Every time I get on a CTA bus or train is like the curtain parting on a brand-new play. I never know who will be the star or just a bit player. Every passenger who gets on and sits down or stands in the aisle can be the subject of a drawing.

I’ve been drawing on subways and buses in my sketchbooks for as long as I can remember but always wanted to figure out some way to use color and make them more finished pictures. I hate working from drawings and prefer to work on site and directly whenever possible, so taking the sketches back home and using them as a jumping off point never held much appeal. There was no way I could lug my paints on the bus, that’s for sure.

Then, sometime early last year I watched some kids using crayons to draw outside and had a eureka moment. It was a way to have color and drawing all at once. But crayons weren’t quite right for what I had in mind. I hadn’t used colored markers to draw since I was a teenager but thought they might do the trick. I went to the art store and bought a few colored Sharpies and tried them out on the Halsted bus. I kept going back and getting more and more colors. I’m used to mixing primaries to make color so markers are a totally different way of working for me. It’s been both exciting and odd. Like opening a guitar case and noticing that the instrument suddenly has forty strings instead of the six I’ve known for so long.

I feel a little bit like a crazy person riding from end to end of a bus or train line with a thrift store purse full of markers around my neck, but the few people who bother to look up from their cellphones usually like what I’m doing. It’s a way to capture fleeting moments of city life in a novel way. It’s also a great way to get some relief from the heat and humidity of Chicago summers.

I’ve taken the Green Line west to Oak Park and south to Cottage Grove, the Orange Line to Midway and back to the Loop, the Halsted bus south to 79th Street, then back north to Broadway, among many dozen rides over the past couple years. My aim isn’t to ride every single bus and train route in Chicago; that would take too long and would be more of an endurance challenge rather than an attempt to paint a portrait of the city. I expect to keep taking my purse of markers on the CTA for decades to come. 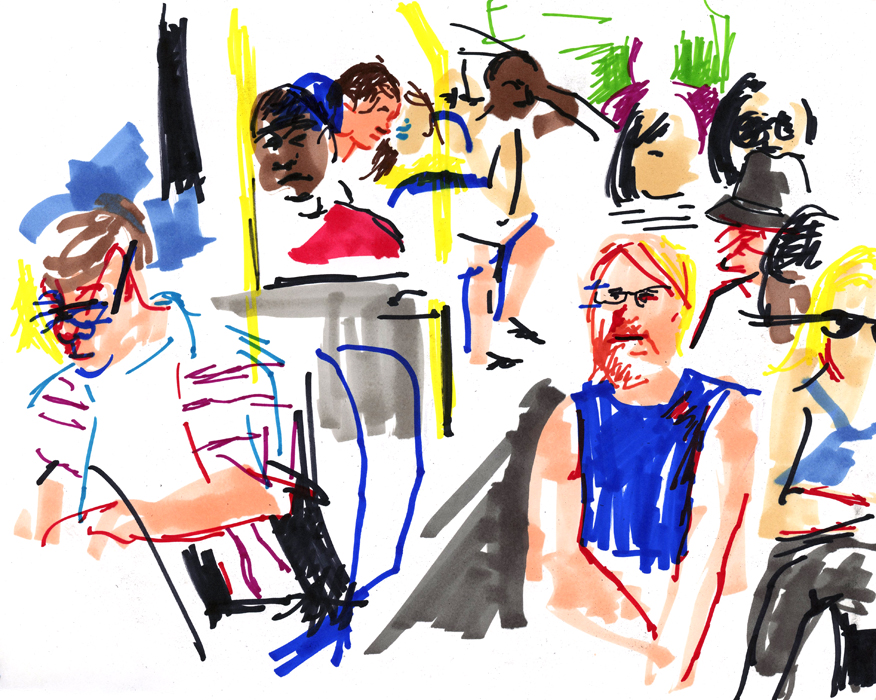