About the Artists
The Jazz Hoofing Quartet, a new band featuring a live music trio and Jumaane Taylor, follows Supreme Love, Taylor’s first for work for ensemble and performed to the complete recording of John Coltrane’s A Love Supreme. Taylor began his formal dance training in tap at Chicago’s Sammy Dyer School of the Theatre. He has been expanding the tap form for more than a decade, performing with Chicago Human Rhythm Project and touring in Germany with Rasta Thomas’s Tap Stars (2011); with the ensemble in Tap in2 Peace (2009), directed and choreographed by Sarah Savelli and Ayodele Casel; and with Imagine Tap! (2006), directed and choreographed by Derick Grant. Taylor is acutely interested in the musicality of tap and its twined history with jazz. For his Lab project Taylor is starting a new dance company, Heel and Toe Productions, and “goes back to school” by working in the studio on improvisational ideas for new dance scores with masters in tap Savion Glover and Sarah Petronio and musicians Marlene Rosenberg (bass), Justin Dillard (piano), and Makaya McCraven (drums). McCraven is also an in-demand producer hailed by Pitchfork for channeling “electric… raw improv into a shapeshifting form between hip-hop and free jazz.”

Daniel “BRAVEMONK” Haywood is a cultural ambassador and national leader in the hip-hop community, and has been an educator, performer-choreographer, judge, and competitor for more than two decades. Breaking, hip-hop, social dances, and house are central components of his movement vocabulary, which is rooted in the African American vernacular. BRAVEMONK is a member of the internationally recognized breaking crew Phaze II Crosstown Crew (est. 1982), cofounder and coartistic director of BraveSoul Movement, a founding contributor and cohost of Power Style Radio, and advisory board member of the Chicago Dance History Project. For his Chicago Dancemakers Forum Lab Artist project, Breakin’ On The Line: Tradition/Innovation, he collaborates with Kelsa “K-Soul” Robinson, dramaturg, to explore the boundaries of concert performance and street dance forms, connecting contemporary hip-hop to the Afro-diasporic cultural lineage of American dance. 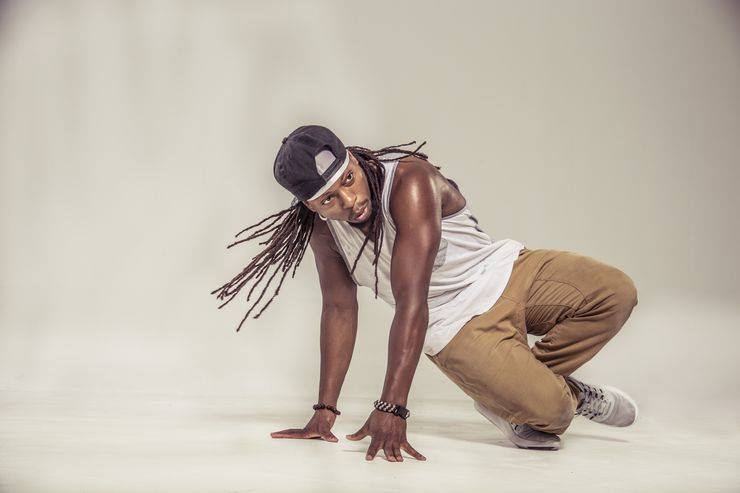