On view through Friday, February 1st

The National Museum of Puerto Rican Arts and Culture is honored to present Circus of Absence, an exhibit by Y no había Luz in partnership with Segundo Ruiz Belvis Cultural Center. Their magical theatrical displays makes us think about Puerto Rico and the different struggles of our island through true beauty. The hard work of Y no había Luz is visible in the every detail, the construction of their teatrinos (tiny theaters) and the different characters you will find in the Circus of Absence.

Under the tent of the “Circus of Absence”, extroverted characters manifest social-political situations through their enticing circus spectacle. Through these acts, the realities of Puerto Rican identity are revealed: life as a colony, shortages of political leadership, migrant movement in the 21st century, food scarcity, mental health, deflowered capitalism, Jones Act, voices against diversity and gender equality, among others. These topics are depicted by the internal narrative of each character, reflecting their daily struggle and suffering. The colors, games, transformations, humor, fantasy, skills and surprise are essential to this universe, which invites the onlooker to wear the shoes of our protagonists and reflect on their actions and experience.

The concept of this project was finalized in August 2017, as an act of unknowing clairvoyance given the recent events in Puerto Rico. With the destruction and devastation of Hurricane Maria on September 20, 2017, the content of the project has taken an important and urgent turn given the relevance of the material and subject matter. The word “ausencia (absence)” in particular has become a popular theme and has incited the creation of art that aids us in resolving our community’s real life setbacks.

In this exhibition, the artistic collective Y no había luz establishes a radiant world through their interdisciplinary work—combining sculpture, installation, masks, puppets, theater and paint—to capture the imagination. The socio-cultural work they have developed for the last 12 years allows the group to tackle difficult and important topics that build bridges of dialogue between spectator and performance. The purpose is to create spaces where the public connects through art to identify with the realities of being Puerto Rican.

With “Circo de la Ausencia” Y no había luz look to expose the precarious situation in which Puerto Ricans live and to establish international support to help continue constructing a better tomorrow. 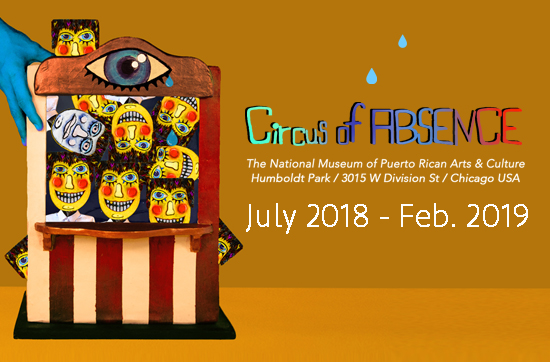